Reply to this email to share reactions or story ideas!

In this section, we curate reporting, analysis, and commentary on the issues school board members deliberate when they set out to offer the best education possible in their district.

Vince Roig and Paul Luna with the Helios Education Foundation write that Arizona’s ESAs will only benefit the children of rich families who can afford home and private schooling options without the savings accounts. They say the law does not hold parents accountable for ESA expenditures. Roig and Luna say the funds should be directed to public schools, which can be held accountable through standardized testing, to benefit less wealthy families.

Arizona House Majority Leader Benjamin Toma writes that the ESA program will not hurt public schools or poorer students who attend them. Toma says the state increased public school funding. He says the ESAs will give all families greater flexibility, and improve academic performance. Toma also compared the ESA program to Arizona’s unlimited public school open enrollment and charter school policies, which he says improved educational outcomes in the state.

“Make no mistake: Only an elite few will benefit from an unprecedented and unpopular expansion of education savings accounts (ESAs), while more than one million Arizona public school students will continue to attend some of the lowest-funded schools in the country. … Right now, the state should be focused on access, accountability and attainment. … Instead, the majority of legislators chose to greatly expand education savings accounts that will help wealthy parents pay for tuition at expensive private schools and other extravagances that Arizona’s neediest children will never be able to afford. … This new law does not hold parents accountable for how they spend their ESA withdrawals. The state will never know if $300 million or more spent on ESAs will yield improved learning. By contrast, public school students will continue to take annual assessments, and their schools will be graded on those results.”

“The truth is ESAs won’t cripple public schools. But we think it will make them better. After years of unlimited district open enrollment and the highest percentage of students in charter schools in the nation, choosing your child’s school – instead of being directed by the government – is the norm here. The results: Arizona schools lead the nation in academic growth for both poor and nonpoor students per the Stanford Opportunity Project. We invested more than $1 billion in our school finance formula this year, most of which was to show holdouts that we weren’t giving up on our public schools and were willing to deal. … School choice opponents have been wrong for decades. Each advance is doggedly opposed because they know parents won’t easily relinquish freedom once enjoyed.”

Ballotpedia has historically covered school board elections in about 500 of the country’s largest districts. We’re gradually expanding the number we cover with our eye on all of the roughly 14,000 districts with elected school boards.

We’re covering the following school board general elections on Aug. 4.

We’re covering the following school board primary elections on Aug. 9.

In your district: reader replies on teacher staffing levels

We recently asked readers the following question about teacher staffing in their school districts:

“News outlets have reported that some districts face a teacher shortage heading into the 2022-2023 school year. Is this an issue in a school district near you? What challenges does it present for the district? How is the district dealing with these challenges, if they exist?”

Thank you to all who responded. Today, we’re sharing a handful of those responses.

Dawn, a school board member from Virginia, wrote:

“We have a teacher vacancy rate of 9%. Our HR department is trying to get creative. We are supporting people with degrees to become licensed and adding video classrooms to name a couple.”

Marc, a school board member from Vermont, wrote:

“Not in our district. We started searches early, pay reasonably and provide an atmosphere teachers enjoy teaching in.”

“Yes, this has been an issue with my school district, where some schools have lost close to half their staff. Being fully staffed will be a huge challenge. My district has mainly responded through financial compensation, including a salary increase, signing bonus, and a $2,000 bonus for all teachers. The district is also looking to improve substitute pay as we have a shortage there too, which leads to teachers losing their planning time to cover for colleagues.

“Yes Marion County School District, Florida, is facing a big need for teachers; the district is having a hiring fair. The problem that I see is two fold:  the district has too many 6 figure administrators with a big staffing apparatus and to my knowledge the district has very little if any parental input and advisement on any educational issues. The Board has problems with Conservatives elected or appointed to the Board.  ”

Lynn, a reader from North Carolina who works to elect school board members, wrote:

“Yes, it is a big issue. The superintendent though is not willing to publicly admit it is an issue. She spent a good deal of time a few weeks ago verbally dismissing ‘the misinformation.’ However the public records of Personnel Reports show a different story. We believe there will be big issues in staffing at the start of the school year as there were all year last year. The district has offered a $10,000 sign on bonus and implemented several programs to bring in lateral entry recruits.”

We’ll be back in August with a new reader survey, and we look forward to reading your responses!

In North Carolina, a recent bill to amend the constitution would have changed the way the state selected its state board of education members.

State Rep. Hugh Blackwell (R) introduced House Bill 1173 on June 15. HB 1173 would have made state board of education member an elected position. Currently, the governor appoints 11 of the 13 members of the board (subject to Senate confirmation) to eight year terms. The lieutenant governor and state treasurer are also members. The bill would also have made the superintendent of education the chair of the board. Currently, the superintendent is the secretary of the board and a non-voting member.

Under the bill, board members would be elected by congressional districts.

The House Education Committee approved the bill 14-7 along partisan lines, with Republicans supporting the bill and Democrats opposing it. On June 30, the bill was removed from the calendar and sent to the House Rules Committee before the legislative session ended. According to NC Policy Watch, the bill is likely to be taken up later in the year.

Democratic legislators who opposed the bill said electing board members would politicize the board.

State Rep. Cecil Brockman (D) said, “I have no idea on God’s green earth why we would make our officials who are supposed to be nonpartisan have to raise money and become partisan.”

Blackwell has said he introduced the bill because “parents and voters feel like they need to have more say in what is happening in our schools, what kind of instruction is being delivered, what kind of leaders we have, and this is designed to give them that voice.”

This year, seven states are holding elections for state board of education:

The North Carolina Superintendent of Public Instruction is Catherine Truitt (R). Truitt was elected in 2020. The position of superintendent exists in all 50 states. Twelve state superintendents are elected, 38 are appointed.

Extracurricular: education news from around the web

This section contains links to recent education-related articles from around the internet. If you know of a story we should be reading, reply to this email to share it with us!

Take our Candidate Connection survey to reach voters in your district

Everyone deserves to know their candidates. However, we know it can be hard for voters to find information about their candidates, especially for local offices such as school boards. That’s why we created Candidate Connection—a survey designed to help candidates tell voters about their campaigns, their issues, and so much more.

If you’re a school board candidate or incumbent, click here to take the survey.

The survey contains over 30 questions, and you can choose the ones you feel will best represent your views to voters. If you complete the survey, a box with your answers will display on your Ballotpedia profile. Your responses will also populate the information that appears in our mobile app, My Vote Ballotpedia.

And if you’re not running for school board, but there is an election in your community this year, share the link with the candidates and urge them to take the survey!

School board candidates per seat up for election 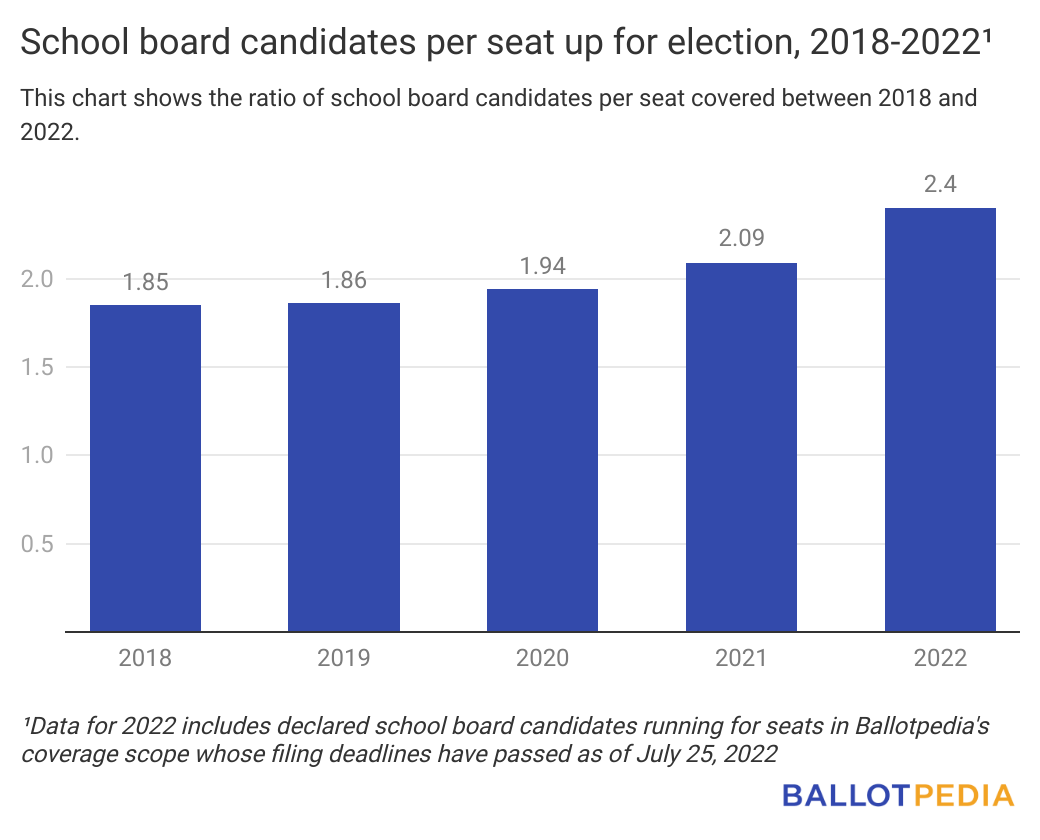 Eisenkot marches into politics with much fanfare, little immediate effect on polls