The Hamilton Tiger-Cats won their first road game this season and their first game in Calgary in 18 years in a 35-32 victory over the Stampeders on Friday.

Tiger-Cats quarterback Dane Evans threw to Tim White in the end zone with 11 seconds remaining in the game for the winning score.

Hamilton linebacker Richard Leonard returned one of his two interceptions for a touchdown. Seth Small kicked field goals from 57, 46, 36 and 24 yards.

Evans completed 17 of 25 passes for 244 yards, and also scored a one-yard rushing touchdown.

Calgary third-string quarterback and short-yardage specialist Tommy Stevens had given the Stampeders a five-point lead with 63 seconds remaining in the game on a one-yard plunge.

Stampeder quarterback Jake Maier, who was intercepted three times in the first half, completed 26 of 35 passes for 251 yards and made touchdown throws to William Langlais and Tre Odoms-Dukes.

Third in the East Division, Hamilton (6-10) is trying to fend off the Saskatchewan Roughriders (6-10) in the West seeking to take a playoff spot via a crossover.

The Montreal Alouettes (8-8), who rank second in the East, locked in both a post-season berth and a home playoff game with a 34-30 win over the Ottawa Redblacks earlier Friday.

The Stampeders (10-6) had already secured a West Division playoff berth, but are in a race with the B.C. Lions (10-5) for second in the West and the right to host the division semifinal Nov. 6.

The Lions are at home Saturday to the defending Grey Cup champion Winnipeg Blue Bombers (14-2), who will finish first in the West and host the division final Nov. 13.

Hamilton strung together two straight wins for the first time this season following a win over the Roughriders last week, while Calgary suffered its first loss to an East Division opponent.

The Tiger-Cats hadn’t won at McMahon since July 4, 2004 before Friday’s victory there.

Calgary amassed 183 rushing yards to Hamilton’s 56 in front of an announced 20,589 at McMahon Stadium, where a hard north wind blew into the faces of kickers and punters in the home end.

Hamilton led 27-26 with three minutes remaining in the game following Small’s 36-yard field goal into the wind. The Tiger-Cats turned the ball over on downs inside their own 20-yard line, however, with 1:46 remaining.

Trailing 24-13 late in the third quarter, Maier finished an eight-play, 70-yard drive with an eight-yard scoring throw to Odoms-Dukes.

Calgary’s Tyson Middlemost recovered the subsequent Paredes kickoff for the Stampeders to get the ball on Hamilton’s 19-yard line.

Paredes then cut the deficit to one point with a 26-yard field goal to start the fourth quarter.

Hamilton scored on its opening drive of the second half capped by Evans’ one-yard plunge on a third-and-goal for a 21-10 lead.

Despite dominating time of possession and holding Hamilton’s offence to 60 total yards in the first half, Calgary trailed 14-10 at halftime because Hamilton turned Maier’s three interceptions into 10 points.

Small booted a 46-yard field-goal with eight seconds left in the half. Paredes kicked a 34-yarder with 50 seconds remaining.

Leonard returned Maier’s third pick for a 64-yard touchdown late in the second quarter. The Stampeders then conceded a single on the ensuing kickoff.

3:52
Quarterback situation in the air for Calgary Stampeders

Calgary’s quarterback was intercepted on his two opening drives. Leonard halted a downfield march with a pick to get Hamilton the ball on their own 14-yard line. The visitors ended up punting after a two-and-out.

Maier’s second throw of the game was picked off by Hamilton’s Julian Howsare. Unable to covert the turnover into a major, Hamilton settled for Small’s 24-yard field goal. 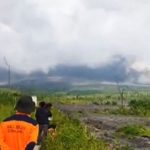