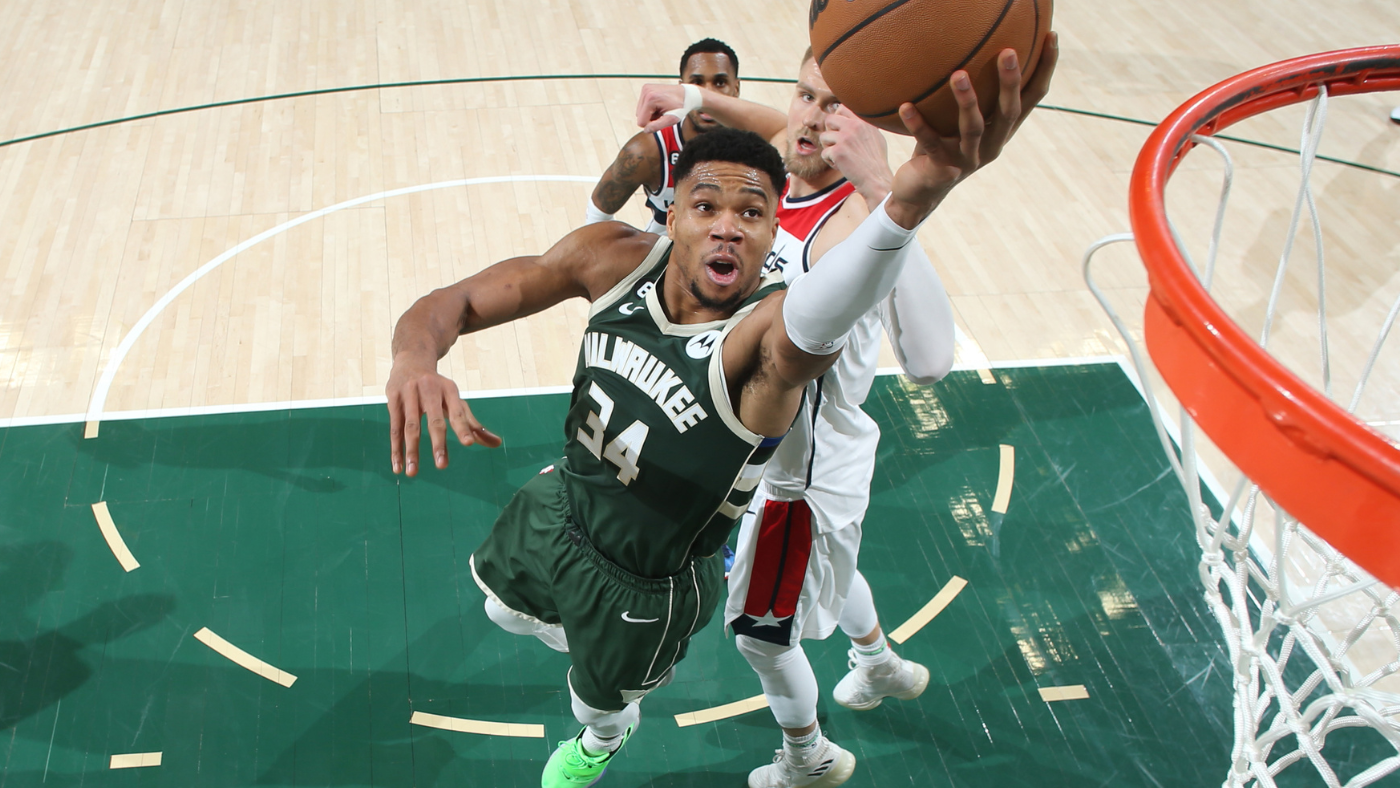 On Monday night, 22 players scored at least 25 points across the the NBA. Of those 22, 10 recorded at least 30, five crested 40 and two hit for 50-plus: Klay Thompson with 54, and Donovan Mitchell with 71, that latter of which goes down as the highest single-game output since Kobe Bryant’s 81-piece in 2006.

Before we could even digest those performances, Giannis Antetokounmpo went out and scored a career-high 55 points against the Wizards on Tuesday. The NBA has always been a league of numbers, whether traditional or new-age algorithmic, and business is booming this season.

Just 10 weeks into the schedule, there have already been six games of at least 55 points, which is an NBA record for a single season. There have been 14 performances of at least 50 points this season, which matches the total from all of 2020-21. There were a total of 19 50-point games last season. At this pace, there’s a good chance that total gets dusted by the All-Star break.

Entering play on Wednesday, there are six players averaging at least 30 points per game, and three more are within striking distance of that number averaging 29 or better. Since 1963, there haven’t been more than three 30-point scorers in any single season.

It’s not just scoring, either. Game Score is a catch-all number that, in taking the full box score into account, roughly quantifies single-game performances: On Monday, Mitchell’s 71 points, 11 assists and eight rebounds registered a Game Score of 60.80, which ranks as the third best showing of the past 40 years.

You might say there are clear answers as to how modern NBA grounds have become so statistically fertile, and the pace at which today’s game is played might be your second conclusion beyond the obvious 3-point revolution. You’d be right about the latter; it cannot be argued that the 3-point era is going to breed bigger numbers.

But you would be wrong about the pace. So far this season, the league-average has been 99.3 possessions per 48 minutes, per Basketball-Reference, which qualifies as a slower pace than 18 other recorded seasons.

More accurately, it’s about who’s controlling these possessions. Doncic and Embiid, who are responsible for four of the 14 50-point games this season, currently own the fifth- and eighth-highest usage rates in recorded history. Antetokounmpo entered Tuesday with a 38.61 usage rate, which would be the fourth-highest mark of all-time, per Basketball-Reference, which also notes that 18 qualifying players finished last season with a usage rate of at least 30. This season, that number is at 16. No other campaigns in history come close to matching that volume of high-usage players.

That’s a nerdy way of saying what we all know to be true: NBA players have never been more skilled than they are today, and that skill, both for the way scorers are deployed and officiated and the increased space in which they have to operate, has never had a more conducive environment in which to flourish. The numbers we’re seeing are a result of that offensive cocktail.

Freedom of movement has indeed unlocked the modern scorer, but before jumping to the low-hanging conclusion that point totals are being inflated by more whistles and more free throws, understand that this season there are, on average, 20.5 fouls being called per game. Of the 77 seasons we’ve seen since the dawn of the NBA, only eight have produced fewer foul calls per game, including last season at 19.3, which was the lowest total ever.

I point this out to combat the rhetoric that today’s rules have bred soft scorers that, supposedly, couldn’t survive in the tougher days of eras gone by. The truth is that free throws were handed out more often back in the day. Just like the supremely skilled scorers we see today, NBA defense has arguably never been better, either.

The versatility of today’s top defenders is incredible. Guarding across the positional spectrum isn’t so much a bonus anymore as it is a requirement. From a scheme standpoint, we have never seen such sophistication or connectivity.

And these defenders have to do this without fouling at disproportionate rates, which, as evidenced by the small free-throw numbers referenced above, they have proven largely successful in doing. Which brings me to a point that is, in my opinion, worth considering as it pertains to this statistical boom: It’s not about scorers hunting quick-trigger whistles, it’s about defenders avoiding them.

From the landing-space rules protecting shooters to the well-chronicled disappearance of pretty much any contact at all with a ball handler, today’s defender has to be, for the sake of his own survival, a careful, conservative hunter, ever respectful of space. This, in turn, leads to more rhythmic, less interrupted and ultimately cleaner avenues toward, and looks at, the basket over the majority of minutes.

If you give a scorer of today’s skill and shotmaking level a clean canvas from which to create, you’re going to see magic. Indeed, this is about the only way to describe what’s been going on across the league of late. These performances are magical.

Yes, it can be tempting to at least marginally minimize these extraordinary statistical feats as they become increasingly common. The easier you make something look, the easier it seems to do. I’m here to denounce that line of thinking, even as I fall victim to it myself from time to time. There is not a single thing easy about scoring 71 points or putting up 60-20 triple-doubles in an NBA game.

What we are watching this season is amazing stuff. It’s not about the defense. Or the foul calls. Or the pace. It’s about a league that has never been more stocked with all-time offensive talent. I, too, miss a lot of things about the 80’s and 90’s era NBA game. But from a pure skill standpoint, I can’t imagine a better time to be an NBA fan.