Crossbell was once a sleepy little town, but coming back from three years abroad, Lloyd Bannings finds it to be filled with the hustle and bustle more befitting of a larger city. Taking on a new special assignment at the local police department, he finds that a lot has changed since he left to become a detective. With Crossbell growing at a huge pace and the peoples’ faith in the police at an all time low, Lloyd’s assignment at the Special Support Section (SSS for short) couldn’t have come at a more pivotal time. Saving kids from sewers, finding lost pets, and walking old folks home may not be the most lucrative work, but with the media tearing the department down with every news article and many others desperate to see the SSS team fail, one kind of wonders what all is going on behind the scenes, and why people are so keen to see it fall…

The Legend of Heroes saga spans a dozen main series titles – something that may seem a little daunting to someone just now deciding to dip their toes into the story. Luckily, Trails from Zero is as friendly a starting point as any ever could be: Crossbell is a fairly closed setting and the characters featured will definitely appear in other games, but this point in the story is early on in their development and won’t serve to spoil any future story progression should the player wish to continue on with another game. For someone looking to bite into another lengthy JRPG series, this is wonderfully good news as you won’t be missing out on more than a few nods here or there in passing, but that replays later on once you’ve had a few more games under your belt may be further enjoyed due to that connectivity. In short, Trails from Zero can stand all alone on its own and still be fully satisfying. This being my first entry into the series, I’ve enjoyed every moment so far.

The Legend of Heroess: Trails from Zero opens up introducing our main party and solidifying a little bit of character backstory for each person – Lloyd, who aced the detective exam and came back to his home town; Randy, an easy-going flirt who has took the job as a change of scenery; Tio, a techie and savant of few words whose youthful experience hides her skill; and Elie, a kind hearted girl who wants to keep Crossbell safe and happy. Together, the four make up the Special Support Section and will be working hard to turn things around for the people of Crossbell and for the Crossbell Police Department’s ever-declining reputation. After a harrowing first mission and an introduction to the rival Bracer Guild, the four heroes resolve to do the best they can to not only help the people, but also get to the end of what’s really causing all the issues in the city. Why has faith fallen so low for the CPD? 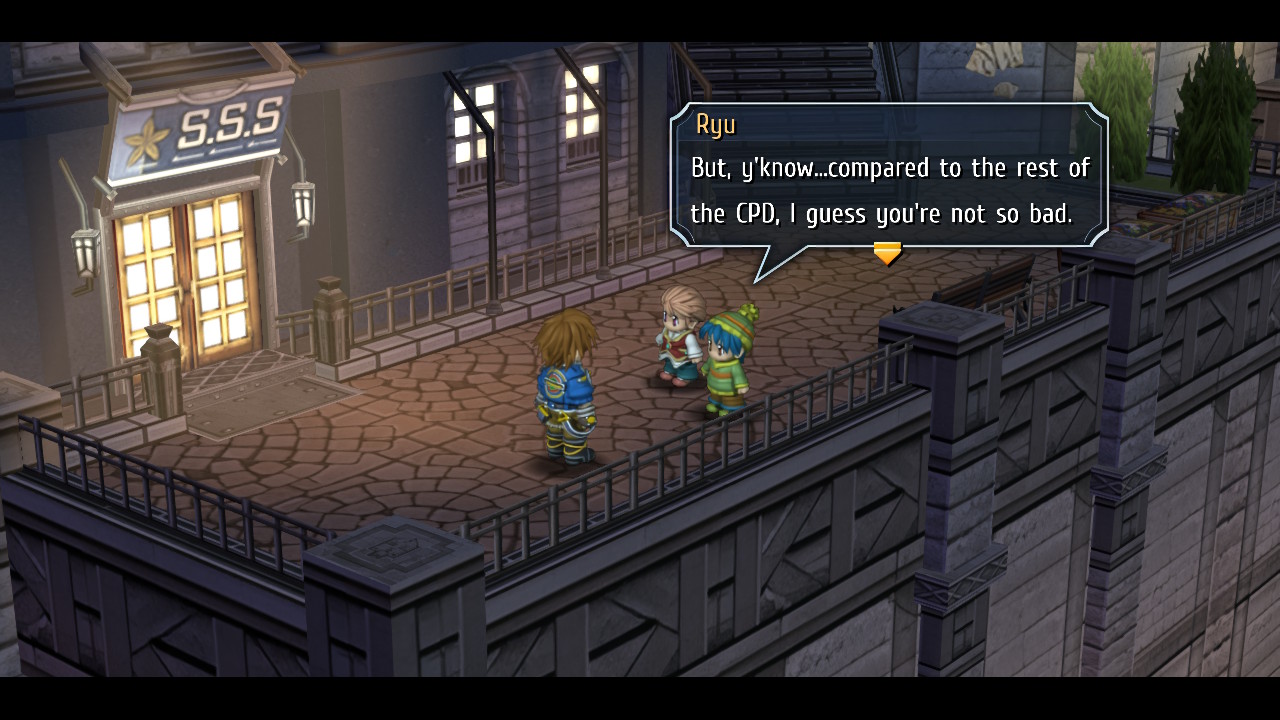 Turn-based combat is introduced early on, with the system also containing movement and range mechanics, meaning players will need to make sure to think about character placement alongside which abilities to use. This extra layer of thought makes each battle more tactical, and clearing them quickly while taking no damage multiplies your rewards slightly at the end of every fight. Abilities in this system are called Arts, and each character can change them out using an equipment piece called quartz. Different types of quartz enable the use of different types of attacks and support magic, which makes it easy to try different things on your characters and truly customize your battle experience. The use of a rush ability to overwhelm and damage foes is also quite nice, and the battle animations hold up as quite nice despite their age with the upscaling really showing off the cute chibi-style characters.

As a port of a PSP title, NIS America opted to update and enhance the game before its move to Switch. As with the graphical refresh, they also wanted to deliver the best version of this game’s beloved story. In the end, they chose a fan-translated script and worked with that team to bring their take on the localization over in this version. What comes of this is an absolute masterpiece of a story and a dynamic between the cast that is unparalleled. While this is the west’s first time experiencing this tale officially, translators had worked tirelessly for years to allow players to patch their Japanese copies with English text – and that’s what ended up happening yes. The series’ biggest western fans ended up aiding in their beloved game’s eventual release to their home countries using their own script and the story flows very well, which is great news for a dated turn-based JRPG. 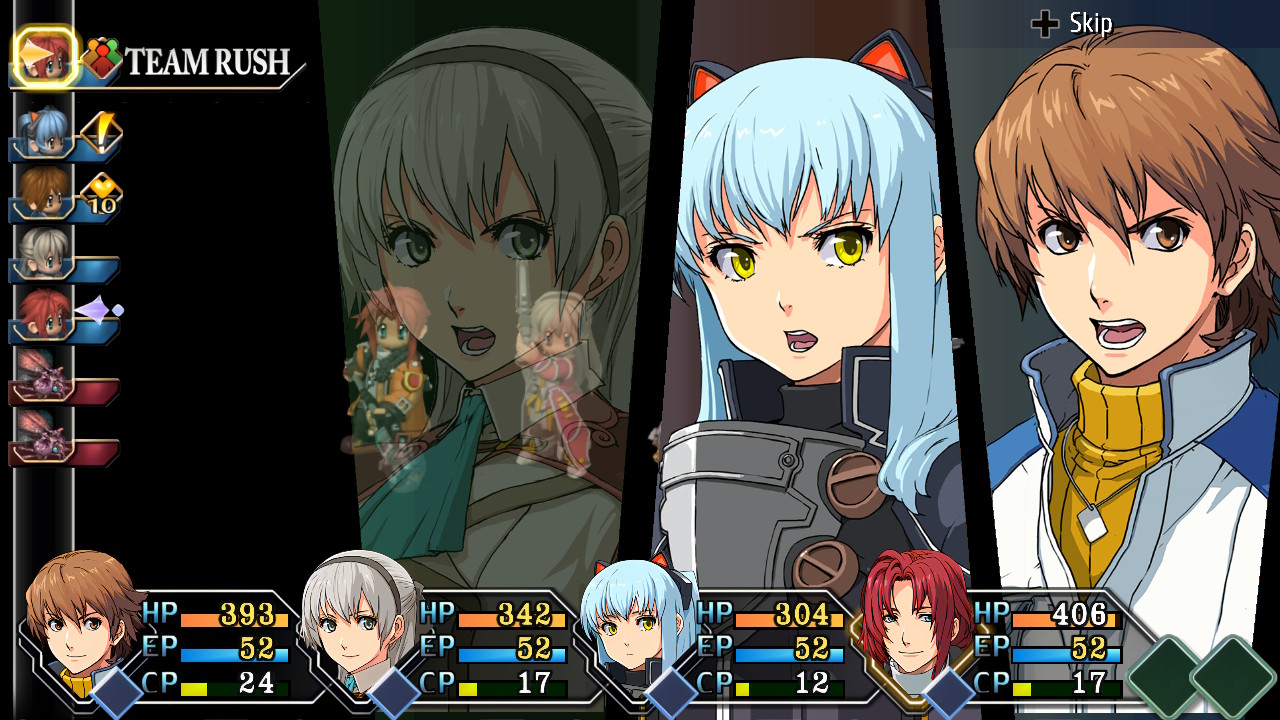 In an effort to not spoil the story, The Legend of Heroes: Trails from Zero is so much more than just rookie police officers learning the ropes. It’s a story of friendship, trust, and doing the right thing despite it not always being easy. It’s following your heart and identifying with characters who are open about the same struggles you’ve had, who experience loss just like you have, and who feel alive and sometimes just as pained as you do. It’s getting to know four young people who truly want to do their best to help others and make the world a better place around them, and in this world that we live in, seeing people succeed in doing what we wish we could: making the world better for the people you love and care about, and it feels great.

So are there negatives? Sure, but to me they seemed small. Story progression does have some points where completing filler missions are required in order to progress. As a person who like to do these things anyway for completion, I had no real issue with this as a player, but I do have many friends where that’s a bit of an annoyance. So yes, this could be seen as a bit of a “grindy” game to some. The story and overall experience are definitely worth the time sink, though. With combat being so fun and customizable, chaining battle after battle doesn’t feel bad at all, and with a good setup and planning, its fun to melt teams of foes before they have a chance to lay a hand on you. As far as other small details go, I was also never warned about the sheer amount of joke content there is in a game that tries to take itself seriously. Trust that it still does a good job at that, and enjoy the jokes for what they are.

It’s the amazing writing and story progression that makes a great JRPG for me, and The Legend of Heroes: Trails from Zero is a wonderful experience that is likely to become a beloved must-have for anyone that feels the same. While the repetitive filler loop can be a turn off to some, for those of us who enjoy a good story, this grind is way more than friendly and never feels stale due to the combat system being rather fun. As you get to unravel the corruption in Crossbell, make sure to explore every nook and cranny. Open every chest (twice, trust me.) Equip every piece of quartz and see what abilities they hold. Enjoy this world, because it is massive, and there is so much more on the horizon to love. Enjoy the references and jokes, enjoy the callbacks to other games in the series and get your introductions to characters who will feel just as much your friends as just a character you control. This is the pinnacle of world building, and if you love it, then definitely check out the other games, too. I’m heading right into Trails of Cold Steel and will be looking forward to when Trails to Azure releases next year and we get to follow our Special Support team on their next adventure.

The Legend of Heroes: Trails from Zero copy provided by the publisher for the purposes of this review.