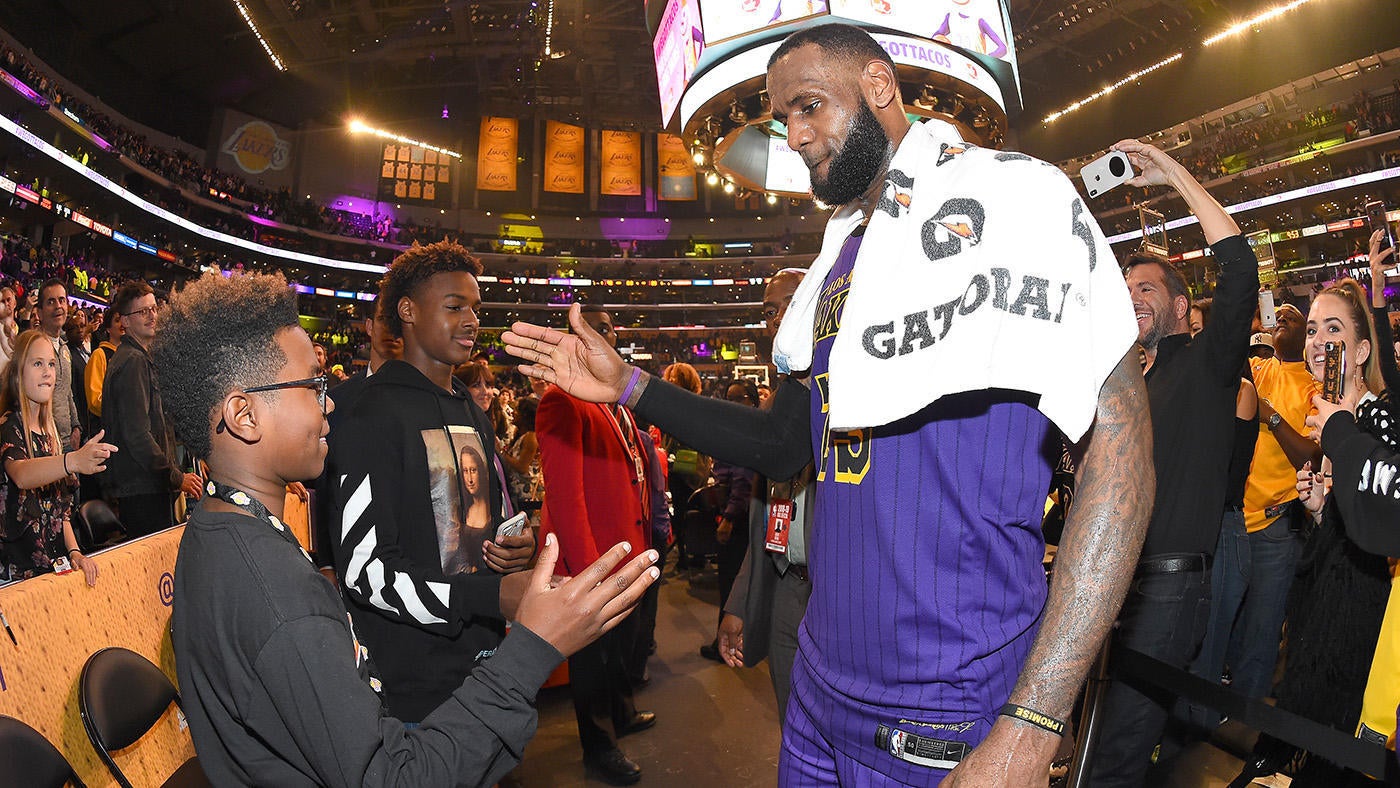 It’s been 16 years since the NBA barred high schoolers from the draft, but with a new CBA on the way, it looks like things might be changing back to the way they once were. The league and players union are expected to agree to lower the minimum age for entry into the NBA Draft from 19 to 18 when they eventually settle on a deal, according to The Athletic. Such a change could come as early as 2024.

This would clear the way for the next batch of high school stars to turn professional just as players like Kobe Bryant and LeBron James once did. While this change would affect the league for years and perhaps decades to come, there are three fairly immediate stories worth considering. They range from James himself to a group of players he might have once occupied had he grown up in the one-and-done era.

James, unquestionably the greatest high school prospect in the history of the draft process, has made it clear that he would like to play with at least one of his sons, the elder Bronny. It had widely been assumed that he didn’t plan to stick around long enough for his second son, Bryce, to also reach the NBA as the middle James child is still only 15. LeBron himself indicated that he’d like to play long enough to team up with both sons, but with his 38th birthday looming, that might not be possible.

This change won’t matter for Bronny. Whether or not the rules are tweaked, the 2024 NBA Draft would come one year after he graduates high school. He’ll be eligible no matter what. But Bryce, with three years of high school left, might now be able to follow only a year later. He’ll graduate high school in 2025, and if the rule has changed, will be eligible to be drafted when his father is 40. Of course, it’s worth pointing out that the Lakers owe a first-round pick to the Pelicans in either 2024 or 2025. New Orleans decides when it wants the pick. Therefore, it’s possible that the Lakers don’t have a draft pick to spend on one of them. Of course, were James to leave the Lakers as a free agent in 2024, this would not be an issue.

The James family isn’t the one impacted by this news. Cameron Boozer, son of former James teammate Carlos Boozer, is a top prospect in that same class of 2025. Other NBA sons will surely follow, and now, we’ll get to see many of them play professionally a year sooner.

Have you ever wondered why the 2006 NBA Draft was so weak relative to a typical class? Well, in a sense, the one-and-done rule deprived it of its best prospects. Top high schoolers Greg Oden and Kevin Durant were not eligible to be selected. However, the players who would have been top freshmen during the 2005-06 season all declared for the 2005 NBA Draft. That meant first-round talents like Andrew Bynum, Gerald Green and Martell Webster were already gone.

In 2024, the opposite will be true. All of the best freshmen from the 2023-24 collegiate season will be available as normal … but so will the best high schoolers graduating in 2024. This has led many to refer to 2024 as the “double” draft, though it’s a slightly exaggerated misnomer. It’s likely that some high-schoolers will go to college seeking a friendlier draft process in 2025, and we might see more possible upperclassmen throw their names in the ring in 2023 to avoid the double draft. Still, the raw talent in the draft pool in 2024 should be remarkable.

The big winners of this change? The Thunder, Rockets and Pelicans all own unprotected first-round picks in 2024 from other teams. A number of other teams own either swap rights or protected picks in that draft. Those picks are now going to be worth a premium in trade negotiations, and teams that routinely find talent later in the draft like the Raptors, Warriors and Heat will have access to better prospects than they otherwise would.

The G League will never match the NBA in terms of popularity, but it has grown meaningfully over the past few years, thanks in part to the presence of top high school prospects. G League Ignite was founded in 2020, and since then, it has produced three top-10 picks: Jalen Green, Jonathan Kuminga and Dyson Daniels. Scoot Henderson, the No. 2 prospect in the 2023 class, will likely be their fourth top 10 selection.

Aside from offering such prospects a streamlined path into the pros, it also helped every other player in the G League gain some badly needed exposure. Fans want to watch top prospects. More fans means more money for those players, who aren’t earning anywhere near as much as their NBA counterparts.

The G League has evolved into a legitimate and stable minor league for NBA teams, but its biggest attraction just lost a lot of luster. Kuminga, Green, Daniels and Henderson likely would have gone pro before ever joining up if they’d had the option. Perhaps other prospects will view the G League as a preferable option over college, but the best prospects would no longer be incentivized to take $500,000 from a minor league team when they could otherwise make millions in the NBA.