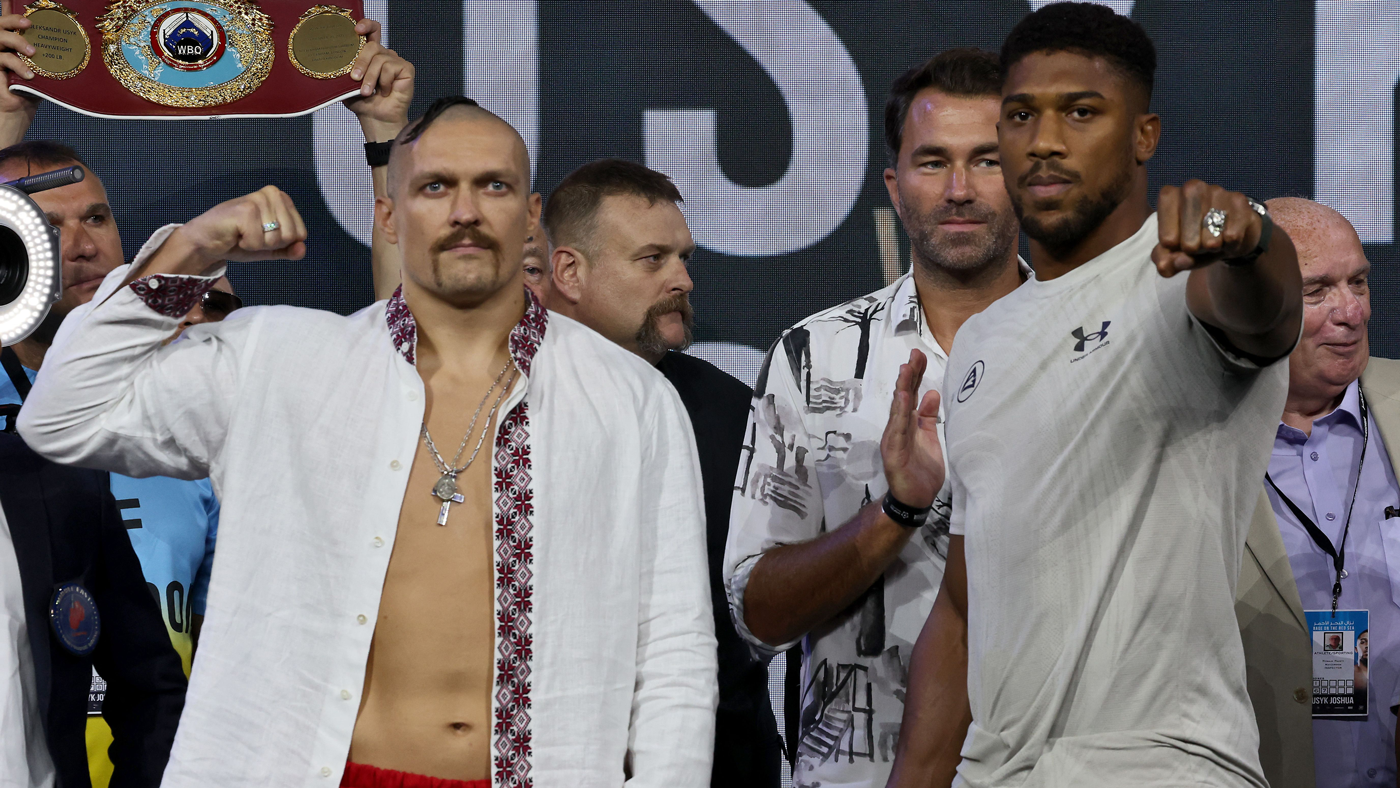 Short on words but heavy on intensity, former two-time champion Anthony Joshua summed up the stakes of Saturday’s unified title rematch against Oleksandr Usyk in Saudi Arabia as succinctly as can be (5:15 p.m. ET — DAZN subscribe now).

“It’s a must-win,” Joshua said during Wednesday’s final press conference in Jeddah, “but I like the pressure.”

In defense of Joshua (24-2, 22 KOs), he has been here and done that before. The 32-year-old superstar from Great Britain lost his trio of world titles via massive upset to Andy Ruiz in 2019 only to redeem himself six months later, also in Saudi Arabia, when “AJ” carefully outboxed a massively overweight Ruiz to win the rematch.

The differences, however, between the circumstances of this title rematch — not to mention the level of opponent in the 35-year-old Usyk (19-0, 13 KOs), the former undisputed cruiserweight champion who is among the pound-for-pound best fighters on the planet — couldn’t be any different.

The motivation for Joshua might feel a bit familiar but when the two hulking heavyweights finally touch gloves inside the Jeddah Superdome for Usyk’s first defense of his IBF, WBA and WBO titles, the headspace Usyk occupies will undoubtedly unique.

Can’t get enough boxing and MMA? Get the latest in the world of combat sports from two of the best in the business. Subscribe to Morning Kombat with Luke Thomas and Brian Campbell for the best analysis and in-depth news, including a complete preview of Usyk vs. Joshua 2 with Rafe Bartholomew below.

A lot has changed in the 11 months since Usyk outboxed Joshua inside a raucous Tottenham Hotspur Stadium in the U.K. Not only did Usyk’s native Ukraine enter a massive conflict following an invasion from Russia, Usyk was among the many notable combat sports athletes to put his career on pause in order to join his nation’s fight on the frontlines.

In fact, it was amid said conflict where Usyk, whose mind was on anything but boxing, made the difficult decision to accept the Joshua rematch and begin training camp after speaking with so many high-ranking military officers on the ground and injured soldiers inside hospitals.

“The whole world has to know that Ukraine is the country of free transport, and strong and spiritually dependent people. Not too many people could deliver this message to hundreds of millions of people but Usyk is able to do that and he does that through the sport of boxing.”

It’s difficult, of course, to project just how much the realities of war and the pride for his nation might change everything from Usyk’s mindset to his performance in the rematch. But if fight week has been any indication, Usyk is operating at an entirely different level of focus and motivation.

Usyk has brought back the shaved head with small pony tail on top that he proudly wore while winning gold at heavyweight in the 2012 London Olympics, the same event that Joshua also won gold at super heavyweight. The hairstyle is called oseledets, a traditional look of the Cossacks, a warrior people from south and east Ukraine, and was even adopted by everyone from the Vikings in the 10th century to English king William the Conqueror at the Battle of Hastings.

Krassyuk has gone as far as describing Usyk’s demeanor as that of a “cyborg” throughout an almost abrasively demanding training camp.

“He went through the hell and the training camp in the last three months and it did not kill him. It made him even stronger,” Krassyuk said. “I have never seen him more determined than now. Not too many champions in the world can share the experience of going through the war and then making their way to the ring to defend their heavyweight crown. It was an exclusively, extremely complicated challenge for him but he seems to have passed it good.”

Just how challenging, one might ask? According to Usyk’s manager, Egis Klimas, his fighter rode his bicycle for 100 kilometers in 113-degree heat upon arrival in Saudi Arabia and swam for five hours in a pool just hours before the start of the press conference. Usyk also submerged himself under water while holding his breath for as long as four minutes and 40 seconds while “almost passing away and shaking himself,” according to Klimas.

Like Joshua, however, Usyk was very short on words when asked to describe what this fight means and how the rematch might be different.

“We learned each other in the first fight,” Usyk said, with Krassyuk translating. “We had enough time to study each other and this Saturday will be a great, great fight.”

Aside from Usyk’s journey from the frontlines to the boxing ring, the biggest storyline associated with the rematch has centered upon the changes Joshua has made to his camp by replacing long-time trainer Rob McCracken with Mexican-American coach Robert Garcia.

Joshua, who said he’s “looking to compete” in the rematch, didn’t get into how his style might change under Garcia, although videos from training camp that have made the rounds on social media showed Joshua’s newfound commitment to attacking the body, which was lacking in last September’s first meeting.

“The team did their job,” Garcia said. “The champion did what he was supposed to do and we are ready. We are ready to do it. He’s happy and smiling with everybody and not having a problem. I think that’s a good thing. I think we are all ready for him to bring those belts home.”

The undercard will feature some familiar names to the hardcore fans. More heavyweights slot into the co-feature when veterans Filip Hrgovic and Zhilei Zhang battle it out. Plus, former titleholder Callum Smith is back in a light heavyweight contest when he takes on Mathieu Bauderlique. And another former champion returns when Badou Jack takes on Richard Rivera at cruiserweight.

Let’s take a closer look at the full fight card along with the latest odds from Caesars Sportsbook before making a prediction and pick on the main event.

If the biggest question surrounding the rematch is which boxer has the better chance of improving upon their performance from the first fight, clearly that’s the 6-foot-6 Joshua, who failed to establish himself as the physically bigger man. Joshua also made a fairly large strategic error last September by trying to outbox such a technical wizard in Usyk.

The addition of Garcia, however, hasn’t been enough to lift Joshua, a slight underdog, back into the role of betting favorite entering the second fight. A lot of that likely centers around the fact that although Usyk is not known as a big puncher at heavyweight, he succeeded in the early rounds by stinging Joshua with just enough clean left hands to discipline him away from trying to walk down his smaller foe.

Usyk, who weighed in Friday less than one pound heavier than the 221 he fought at in the first fight, will still be giving up three inches in height, four inches in reach and close to 23 pounds in weight this weekend. But those differences will only become an advantage for Joshua if he’s able to cut off the ring, slow Usyk down with body shots and use his bulk to lean on Usyk.

If Joshua can’t establish himself as the bigger man and isn’t willing to risk getting knocked out in order to punch with Usyk and rely on the biggest advantage he has as a two-fisted finisher with lethal uppercuts on the inside, a replay of the first fight is very possible.

But there’s only so many clean punches Joshua can take behind a chin that has been routinely questioned throughout his well-publicized reign, which included AJ getting up off the canvas to finish former unified king Wladimir Klitschko in their 2017 thriller. And one would be hard-pressed, even with his lack of one-punch finishing power, to find an opponent more adept at finding Joshua’s chin than the sniper Usyk, who possesses an arsenal of variety when it comes to the speed and angles of his shots.

Had Joshua committed to finishing Ruiz in their rematch instead of playing it safe, the betting odds for this rematch might look a lot different. And given the mental toughness of Usyk, an attribute that has only been sharpened throughout the reality of war in his home nation, one has to wonder if AJ might find more danger than success should he turn this rematch into more of a fight than a boxing match.

Both fighters are highly skilled in their own regard and each have enough motivation to survive and advance at all cost in hopes of luring WBC champion Tyson Fury into the first four-belt undisputed heavyweight championship bout in boxing history. But if we are being honest, Usyk likely has more, in just about every single category beyond power.

Faster adaptation to climate change will save Canada billions: analysis

Common SEO Mistakes That You Should Avoid