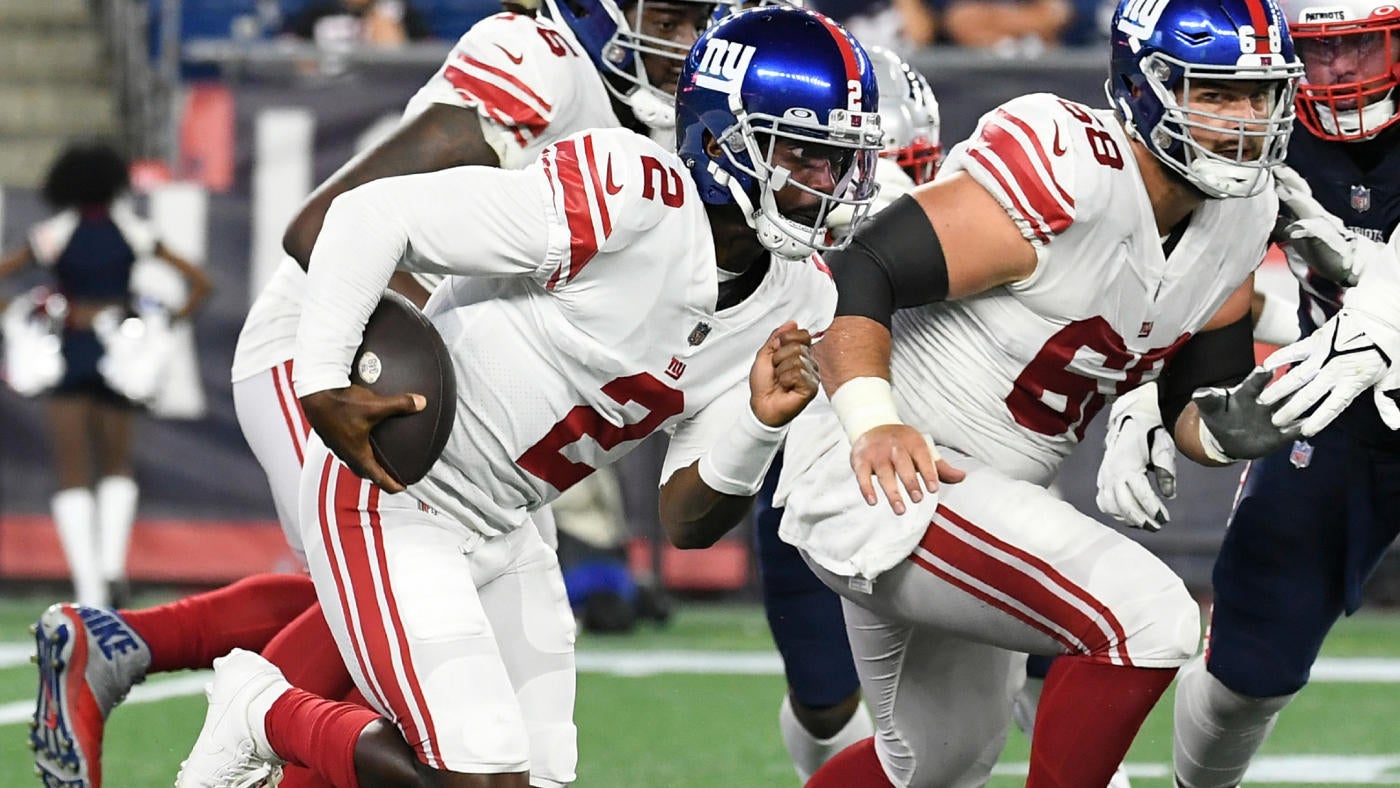 Week 2 of the preseason is known as the “dress rehearsal” for NFL teams in preparation for the regular season (at least for the squads not participating in joint practices). With the start of the season just three weeks away, teams are starting to prepare for Week 1 — part of what makes the second week of the preseason exciting as it may be the final opportunity to see starters before September.

There are some intriguing storylines on the docket heading into Week 2, including a few quarterback competitions that could be decided (check out our takeaways from Thursday night’s Bears-Seahawks game here) and a few position battles that may be settled this week. With more playing time coming for first team offenses and defenses, watching the first half of these preseason games will be all the more intriguing.

Need one reason to watch every preseason game this week? We got you covered.

Will the bad blood continue? The Panthers and Patriots participated in a training camp fight during the first joint practice Tuesday and kept it going Wednesday, not a great sign for either organization. Punches were thrown during the Tuesday practice and a brawl occurred by the stands in the final joint practice Wednesday. A fan was injured in the melee, which was kickstarted after Christian McCaffrey was knocked out of bounds on a running play. McCaffrey spiked the ball at Patriots defensive lineman Deatrich Wise Jr.’s feet, causing the brawl to ensue.

With the nature of the joint practice, it’s highly unlikely the starters play in this one. If there’s a cheap shot at any point in this game, this contest could get ugly.

Which Packers wide receiver will step up? Aaron Rodgers was hard on his wide receivers this week, expressing frustration with the young group over inconsistency in route running and drops. Rodgers trusts Allen Lazard and Randall Cobb, but none of the young wideouts have separated themselves from the pack.

Rodgers likely won’t play in the preseason (he hasn’t played a preseason game since 2018), but he felt bad for Jordan Love that the younger receivers hurt his box score in the preseason opener. Amari Rodgers and fourth-round rookie Romeo Doubs are the two wideouts to watch as second-round pick Christian Watson has yet to take part in full-speed, 11-on-11 practices.

In addition to the young wide receivers, Tyler Davis has started at tight end in place of Robert Tonyan — who is coming off a torn ACL. He’s been under Rodgers’ microscope as well.

All the young receivers are players to keep an eye on this weekend, no matter who the quarterback is. Time is short and the regular season is coming.

Will Dameon Pierce back up strong preseason debut? Pierce had five carries for 49 yards in the second half of the Texans’ victory last week, averaging 9.8 yards per carry to lead all of Houston’s running backs. Head coach Lovie Smith revealed Pierce “caught his eye” as he’s starting to play his way up the depth chart and challenge Marlon Mack for the starting job.

Pierce was mostly used as power back at Florida, as the fourth-round rookie needs to work on his pass catching to earn more playing time. His natural running ability should earn him snaps in a run offense that finished last in the league in rushing yards and yards per carry last year.

The Texans like Pierce. He’s going to get an opportunity.

The Bills rookie cornerbacks. Kaiir Elam and Christian Benford received a lot of praise for their performance against the Indianapolis Colts’ first-team offense in the preseason opener, more than holding their own against Michael Pittman and Alec Pierce. Sean McDermott was more than impressed with the first-year cornerbacks, making the Bills cornerback group even better once Tre’Davious White and Taron Johnson are added to the mix.

Elam is projected to start in Buffalo while Benford — a sixth-round pick — has played his way onto the second team. The duo allowed just four catches on nine targets for 39 yards, showcasing they can play in the league.

Denver’s wide receivers will be another good test for Elam and Benford.

Can Aidan Hutchinson repeat his strong debut? Hutchinson might be one of the only starters who plays in this one, pending how Lions head coach Dan Campbell handles the joint practices this week. Facing the Colts offensive line is a good test, especially for a player who had two tackles in just 10 defensive snaps in his NFL debut.

Hutchinson will likely play more this week, if Aaron Glenn allows some of the young starters to play. If Hutchinson doesn’t go, Malcolm Rodriguez (Rodrigo of Hard Knocks fame), will be worth watching at linebacker.

How will Carson Wentz look against one of the NFL’s top teams? Wentz was 10 of 13 for 74 yards in his preseason debut with the Commanders last week, looking like he’s finally starting to settle into the offense after a rocky stretch of inconsistent practices. He has cut back the off-target throws, which has been encouraging for Washington.

Seeing Wentz play the Chiefs revamped defense and growing his chemistry with Terry McLaurin, Jahan Dotson, and Curtis Samuel is vital for the Commanders’ chances in the NFC East this year. Saturday may actually be the “dress rehearsal” for this group.

Who’s going to take the lead in the quarterback competition? Pretty easy to pick the one thing to watch in this game, right? The Steelers have Mitchell Trubisky, Mason Rudolph, and Kenny Pickett vying for the No. 1 quarterback job — with Pickett becoming the fan favorite after leading Pittsburgh to victory in the final seconds of the preseason opener.

Pickett is starting to get reps with the first team, and it would be intriguing to see the first-round rookie with the starters in this one. Trubisky is likely to play with the starters again, but when head coach Mike Tomlin puts Pickett into this one will be worth watching.

Trubisky is the leader in the clubhouse right now, but Pickett has closed the gap.

Will Mike McDaniel actually debut his new-look offense? The Dolphins offense received a massive makeover this offseason, starting with the acquisition of Tyreek Hill and the free agent addition of Ced Wilson to compliment Jaylen Waddle in the passing game. Miami signed Terron Armstead and Connor McGovern to improve the offensive line and brought in Raheem Mostert, Chase Edmunds, and Sony Michel to upgrade at running back.

McDaniel didn’t play the starters in the preseason opener and won’t reveal whether he’s playing the first team offense Saturday. There’s been a ton of hype how well Tua Tagovailoa has looked this offseason and in training camp. Perhaps Dolphins fans will get to see him play for at least a series or two.

Can Trey Lance back up his strong preseason debut? The 49ers and Vikings participated in joint practices this week, so there’s a good chance fans may not even see Lance at all in Saturday’s game. Head coach Kyle Shanahan said he’s “day-to-day” with deciding whether to play Lance, who completed 4 of 5 passes for 92 yards and a touchdown in just 11 snaps last week.

Lance is the starting quarterback and played limited snaps in 2021 and just one game in his last season at North Dakota State (2020). Playing more game snaps would be beneficial, but Lance is likely going to be put in bubble wrap the remainder of the preseason.

Malik Willis and his arm talent. Willis impressed in his preseason debut, going 6 of 11 for 107 yards (88.1 rating) with a rushing touchdown in his two and a half quarters of action, starting the game as Ryan Tannehill rested. Titans head coach Mike Vrabel did pull Willis midway through a drive in the third quarter because he wanted him to throw the ball.

When Willis takes the field Saturday, there will be an emphasis on the passing game and how he relies on his arm instead of his legs. One of the rookie quarterbacks who could become a starter this season at some point, Willis as a strong chance to play meaningful snaps if Tannehill struggles.

Can the Cowboys clean up the penalty issues? Dallas and Los Angeles are participating in joint practices this week, so don’t expect to see the first team on either side participate in this one. The Cowboys are likely going to be playing the second team, but the microscope will be on Mike McCarthy’s unit because of the penalties the team committed in Week 1 of the preseason.

A year after leading the NFL with 127 penalties (7.48 per game), the Cowboys committed 17 penalties in last week’s loss to the Denver Broncos. Dallas had 14 penalties in last season’s wild card playoff loss to San Francisco, so the problems aren’t necessarily going away — no matter how much McCarthy vows to clean them up.

The Cowboys have to be better by default, right?

The rise of Nakobe Dean. The Eagles and Browns will also participate in joint practices, so the starters likely won’t play much in this preseason game either. Heading into this week, Dean — the Eagles’ third-round rookie linebacker — is listed on the depth chart as part of the second team.

That could change if Dean follows up his strong preseason debut. Dean was on the field for eight run-designed plays, and came away with four tackles in the preseason opener last week. He led the Eagles with five tackles when exiting the game at the conclusion of the first half.

Philadelphia may give Dean an extended look Sunday as he continues to rise up the depth chart. Dean is playing his way into first team snaps.

How will Tyrod Taylor fare with the first team? Giants head coach Brian Daboll raised some eyebrows this week when he admitted he wanted Taylor — the team’s No. 2 quarterback — to take snaps with the first-team offense this preseason. Playing Taylor with the first team does make sense in case starting quarterback Daniel Jones suffers an injury or struggles for an extended part of the season and needs to be relieved mid game.

Playing Taylor with the first team makes sense for the Giants, but perhaps there’s an ulterior motive involved here.

The Ravens’ NFL record preseason win streak on the line. Lamar Jackson doesn’t have his contract extension from Baltimore yet, so he won’t be playing in this one. The Ravens still have something to play for, even if it’s preseason.

Baltimore hasn’t lost a preseason game since 2015, an NFL record 21 straight games. The Packers previously head the record of 19 from 1959 to 1962 under Vince Lombardi, part of the winning culture the legendary head coach improvised in his team.

The Ravens practice the same strategy in their locker room, hence the reason why they’re proud to keep the streak alive. Baltimore, no matter who head coach John Harbaugh plays, will certainly try to extend the record books another week.

Can Desmond Ridder build off his debut? The Falcons and Jets are also in a joint practice this weekend, so don’t expect the starters to play much (if at all) in this one. Ridder is not part of that group as Atlanta already deemed Marcus Mariota the starter, so he’ll have an opportunity to play extended snaps.

Ridder finished 10 of 22 for 103 yards with two touchdowns and no interceptions (89.8 rating) while also leading the Falcons with six carries for 59 yards in his debut. He made quite a first impression for the Falcons, and can play his way into starting games for Atlanta sooner rather than later.

Playing on “Monday Night Football” in the national spotlight will be a huge opportunity for Ridder, no matter who’s playing in the contest.

6 Habits That Will Help to Reach Financial Freedom