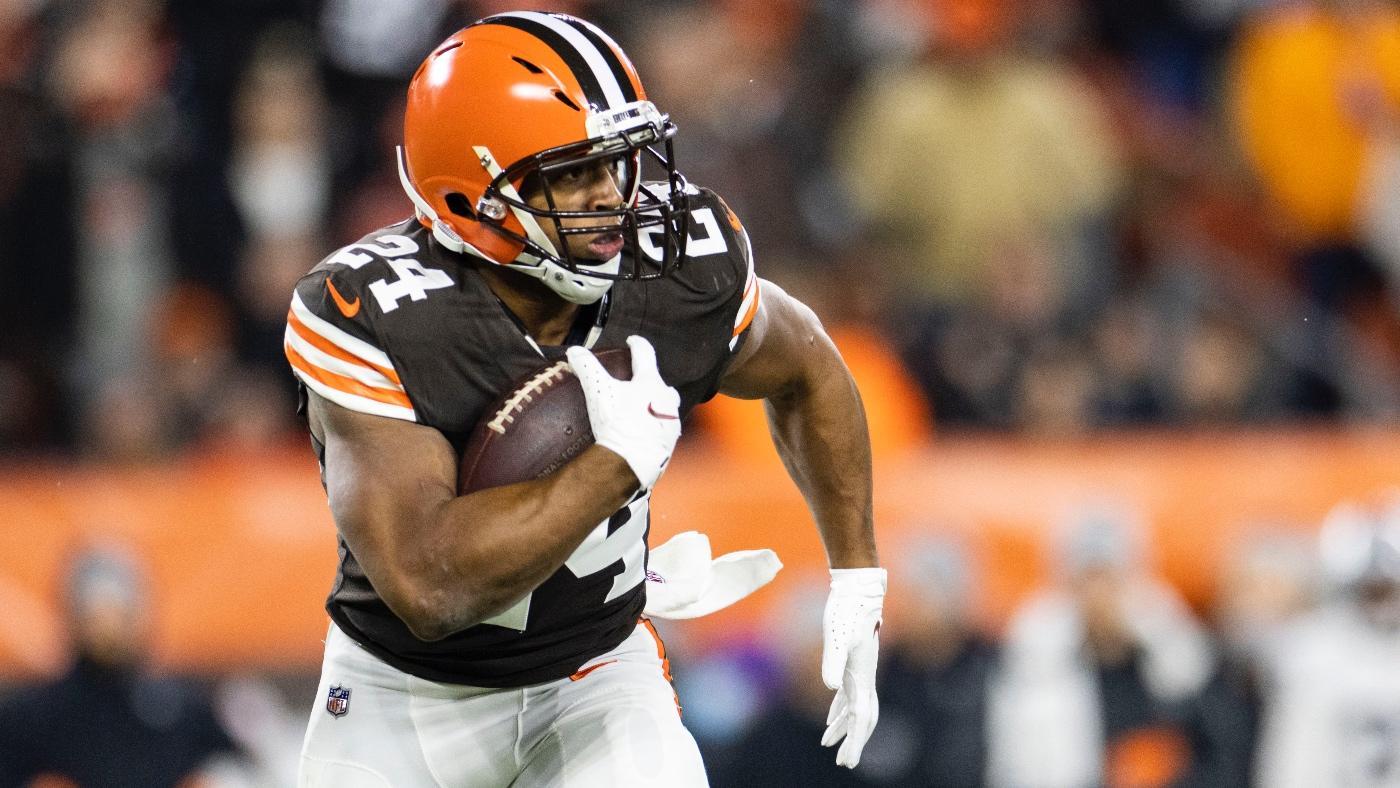 The Week 8 NFL schedule comes to a close with a Monday Night Football matchup featuring Jacoby Brissett and the Cleveland Browns hosting Joe Burrow and the Cincinnati Bengals at FirstEnergy Stadium in Cleveland. The Bengals’ offense will have a different look on MNF with star wide receiver Ja’Marr Chase sidelined for four to six weeks with a hip injury, while the Browns are out to snap a four-game losing streak. Cleveland running back Nick Chubb has his sights set on reclaiming his spot as the NFL‘s leader in rushing yards. With Chase out, should Cincinnati running back Joe Mixon increase in value in your MNF NFL DFS strategy? Or would it make more sense to build your NFL DFS lineups and MNF NFL DFS stacks around a star quarterback, wide receiver, tight end, or D/ST? Amari Cooper, David Njoku, Tee Higgins, Tyler Boyd, and Burrow all project to be impact classic and showdown NFL DFS picks for Monday Night Football.

Before making any NFL DFS picks for Bengals vs. Browns on sites like DraftKings and FanDuel, be sure to check out the NFL DFS lineup advice, strategy and player stacks from SportsLine NFL daily Fantasy expert Jimmie Kaylor.

Kaylor is a NFL and DFS expert for SportsLine, who opened the 2022 NFL season by winning DraftKings’ NFL Showdown Thursday Kickoff Millionaire contest. He edged out over 355,000 other entrants in the contest and also has multiple five-figure tournament wins on his DFS resume. Kaylor, who has been cashing big all season, has covered the NFL and college football for close to a decade as a member of the Pro Football Writers of America, and his background as a former college and NFL player gives him a unique perspective when building his fantasy lineups and locking in his betting picks.

Now, Kaylor has turned his attention to Browns vs. Bengals on Monday Night Football Week 8 and just locked in his top daily Fantasy football picks. You can only see his picks and analysis at SportsLine.

Top NFL DFS picks for Bengals vs. Browns on MNF

One player Kaylor will be building his NFL DFS Showdown rosters around for the Browns vs. Bengals Monday Night Football contest is Browns running back Nick Chubb. The 26-year-old is having another All-Pro caliber season and will regain the lead in the race for the NFL rushing yards title with 40 yards on Monday Night Football. The Bengals have struggled against the run, allowing 119.0 rush yards per game in 2022. Kaylor is expecting the Browns to run the bulk of their offense through Chubb, which should yield another elite DFS performance from the former Georgia Bulldog on MNF.

“Nick Chubb is having another fantastic year for the Browns, and I am expecting Cleveland to continue leaning heavily on the former Georgia Bulldog on Monday. The Bengals are allowing 119 rushing yards per game, and Chubb is arguably the most complete running back in the NFL today. I’m expecting Chubb to end up with well over 20 touches and 100 all-purpose yards with at least one trip to the end zone on MNF,” Kaylor told SportsLine. You can see the rest of Kaylor’s NFL DFS picks here.

How to build NFL DFS lineups for Browns vs. Bengals on MNF

Kaylor is also targeting another undervalued value who could explode for huge numbers for Monday Night Football. This pick could be the difference between winning your tournaments and cash games or going home with nothing. You can only see who it is, and the rest of Kaylor’s MNF DFS picks, at SportsLine.

So who is Jimmie Kaylor including in his optimal NFL DFS lineups for Monday Night Football? And which under-the-radar DFS picks offer huge value? Visit SportsLine now to see optimal NFL DFS picks, rankings, advice, and stacks, all from a DFS expert who already won a single-game millionaire maker tournament in 2022, and find out.