MyPillow CEO Mike Lindell, a supporter of Donald Trump who has espoused the former president’s false claims that the 2020 election was stolen, said he was served a federal subpoena Tuesday and that his phone was seized.

Lindell claimed in a video posted online Tuesday that FBI agents approached him after he ordered food at a Hardee’s drive-thru in Mankato, Minnesota. Patrick McSweney, an attorney for Lindell, confirmed in an email to CBS News that the subpoena was served and Lindell’s cell phone was confiscated.

“We pull ahead and a car comes perpendicular and parks a little ways in front of us, and I’ve been around the block, and I said to my buddy, I said, ‘uh that’s either a bad guy, or it’s FBI,” Lindell said in the video.

The FBI’s Denver office said in a statement to CBS News Minnesota that the agency served a search warrant at that location Tuesday.

Lindell said in the video that in addition to seizing his phone, FBI agents questioned him about Tina Peters, a Mesa County, Colorado clerk who has been accused by state authorities of allowing an unauthorized person to break into the county’s election system in order to search for evidence that would validate Trump’s election conspiracy theories.

CBS News Colorado reported in August 2021 that the FBI was investigating the Mesa County Clerk and Recorder’s Office. It is unclear if Lindell’s subpoena was in connection with that investigation.

Despite the confiscated phone and delayed meal, Lindell was complimentary of the FBI agents he encountered.

“I want to say this for the record, they were pretty nice guys. None of them had an attitude,” Lindell said in the video. 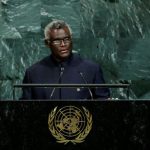