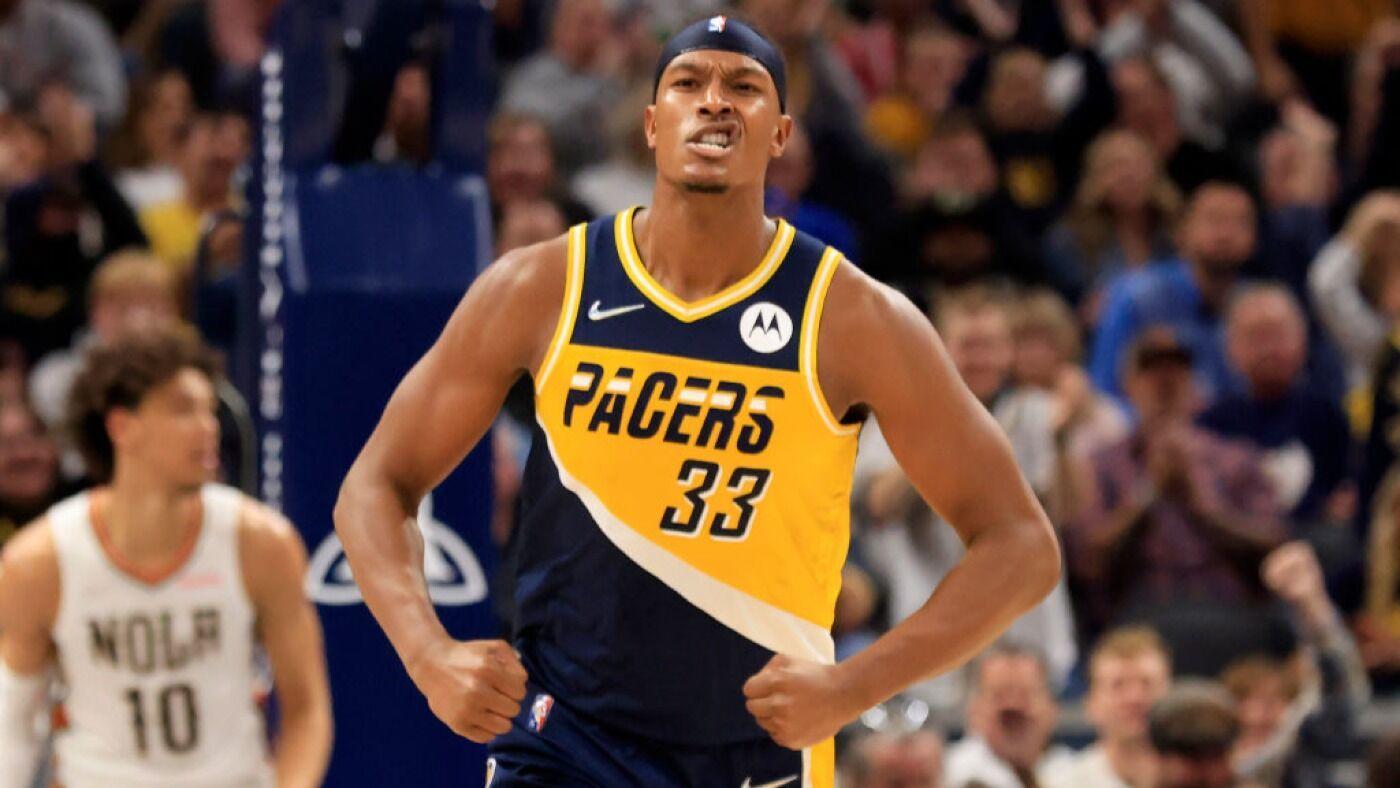 The Los Angeles Lakers have spent months resisting the allure of Indiana Pacers center Myles Turner. They’ve leaked interest in every star from Kyrie Irving to Bradley Beal since then, but despite a months-long standing offer from Indiana, they have refused to surrender two unprotected first-round picks to land Turner and Buddy Hield. Every report in the interim has suggested that their preference is to wait for a star, but the irony here is, through roughly a month of basketball, Turner is actually playing like one.

After years of sharing the center position in Indiana with Domantas Sabonis, Turner has thrived with it all to himself. He’d never averaged 15 points per game in his first seven seasons as a Pacer. He’s up to a career-best 17.9 thus far this season. His 8.7 rebounds per game also represent a career-high, and excluding Jaren Jackson Jr., who has played just a single game, Turner’s 3.1 blocks per game are leading the NBA. To top it all off, his true shooting percentage of 65.6 is also the best of his career. You could credibly argue that Turner is having his best scoring, defending and rebounding season all at once.

These are all traits that would serve the Lakers well. They are the worst shooting team in the NBA, and only Max Christie and Matt Ryan are shooting better than Turner’s 37 percent from deep. They rank 26th in rebounding rate, suggesting a sore need for another big man, and after starting the season hot on defense, they’ve allowed 116.3 points per 100 possessions in their last eight games, which ranks 28th in the NBA in that time period. He may not have an All-Star selection under his belt, but Turner theoretically fits exactly what the Lakers need. He knows it. He essentially pitched himself to Los Angeles on “The Woj Pod” recently.

“If I’m the Lakers, I take a very hard look at this with the position that you are in, and I know I can provide to a team my leadership, my shot blocking, my 3-point ability and just my ability to make plays out there on the floor,” Turner said. “I would take a very long look at it.”

Turner is very aware of how the business of basketball works. He’s on an expiring contract. The Pacers are rebuilding and have a young big in Isaiah Jackson who is quickly earning more minutes. In all likelihood, they aren’t going to be the team that gives him a long-term contract this offseason. For the past several months, the Lakers have been viewed as the likeliest alternative. But the longer Turner plays this way, the likelier it becomes that someone swoops in and snatches him. Rumors are already linking him to their rivals.

Bleacher Report’s Eric Pincus reported Tuesday that the Clippers, who have played small for the most part this season following the free agent departure of Isaiah Hartenstein, are interested in Turner. The Nets and Pelicans have both been rumored as Turner homes in the past as well, and on paper, they’re perfect fits. In Ben Simmons and Zion Williamson, both have unconventional non-shooters at positions other than center, so Turner could fortify the defense behind both of them while providing the spacing that they don’t. This principle could apply to almost any team. Who wouldn’t want an elite defensive center that also makes 3’s?

The Lakers, apparently, but they are running out of time to change their minds. That doesn’t mean the Pacers are rushing to make a deal. They’d surely prefer a trade with the Lakers considering the value of their draft picks. LeBron James will turn 38 in December. Trading for first-round picks in 2027 and 2029 means getting selections when James is in his mid-40s and likely to be retired. Other teams might be able to offer more picks, but those Lakers choices have the best chance of any available selections of landing at the top of the draft (except, ironically, the Lakers picks already owned by the Pelicans). In a perfect world, Indiana would probably like to send Turner to the Lakers.

But they aren’t going to wait forever. Turner has a lengthy injury history, after all, and the longer they hold onto him, the greater risk they incur of being unable to deal him at all. If he keeps playing this well, the offers from other teams are only going to increase. The Lakers have no means of upping their offer in a potential bidding war. They have two picks that can legally be traded. It’s just a matter of whether or not they offer them.

They haven’t yet. They might never. But if they don’t, Turner’s remarkable season suggests that the Pacers won’t have much trouble finding another dealer. If the Lakers don’t make a deal soon, they might lose their chance.