Liz Cheney has paid the price for her staunch opposition to Donald Trump’s assault on US democracy by losing her seat in Congress to a challenger backed by the former president.

The vice-chair of the January 6 committee was beaten by a conservative lawyer, Hageman – who has echoed Trump’s false claims of widespread voter fraud – in a Republican primary election to decide Wyoming’s lone member in the House of Representatives.

Conceding defeat in a speech in Jackson, she said: “No House seats, no office in this land is more important than the principles we are all sworn to protect. And I well understood the potential political consequences of abiding by my duty.

“Our republic relies upon the goodwill of all candidates for office to accept honorably the outcome of elections. And tonight, Harriet Hageman has received the most votes in this primary. She won.

“I called her to concede the race this primary election is over. But now the real work begins.”

Widely predicted by opinion polls, the result continues a winning streak for Trump-endorsed candidates in congressional primaries and deals a blow to the last vestiges of the Republican party establishment.

It would have been unthinkable just a few years ago in Wyoming, a deeply conservative state where the Cheney family has been seen as political royalty.

The three-term congresswoman’s father, Dick Cheney, represented the state in the US House for a decade before becoming defense secretary under George HW Bush from 1989 to 1993 and vice-president under George W Bush from 2001 to 2009.

Supporting his daughter this month, Dick Cheney called Trump the greatest “threat to our republic” in American history.

He also said he was proud of his daughter “for standing up to the truth, doing what’s right, honoring her oath to the constitution when so many in our party are too scared to do so”.

But Liz Cheney’s crusade against Trump during the January 6 committee’s televised hearings angered local Republicans, who accused her of putting her national career ambitions ahead of Wyoming constituents.

She was praised by Democrats and independents for taking a principled stand despite the likelihood it would prove an act of political self-sacrifice.

In a statement released before the race was called, Elise Stefanik of New York, who replaced Cheney as the No3 House Republican, said: “Congratulations to Harriet Hageman on her massive Republican primary victory in Wyoming over Nancy Pelosi’s puppet Liz Cheney.

“… Harriet is a true America First patriot who will restore the people of Wyoming’s voice, which Liz Cheney had long forgotten”.

The Lincoln Project, an anti-Trump group formed by disaffected conservatives, said: “Tonight, the nation marks the end of the Republican party.

“What remains shares the name and branding of the traditional GOP, but is in fact an authoritarian nationalist cult dedicated only to Donald Trump.” 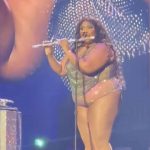