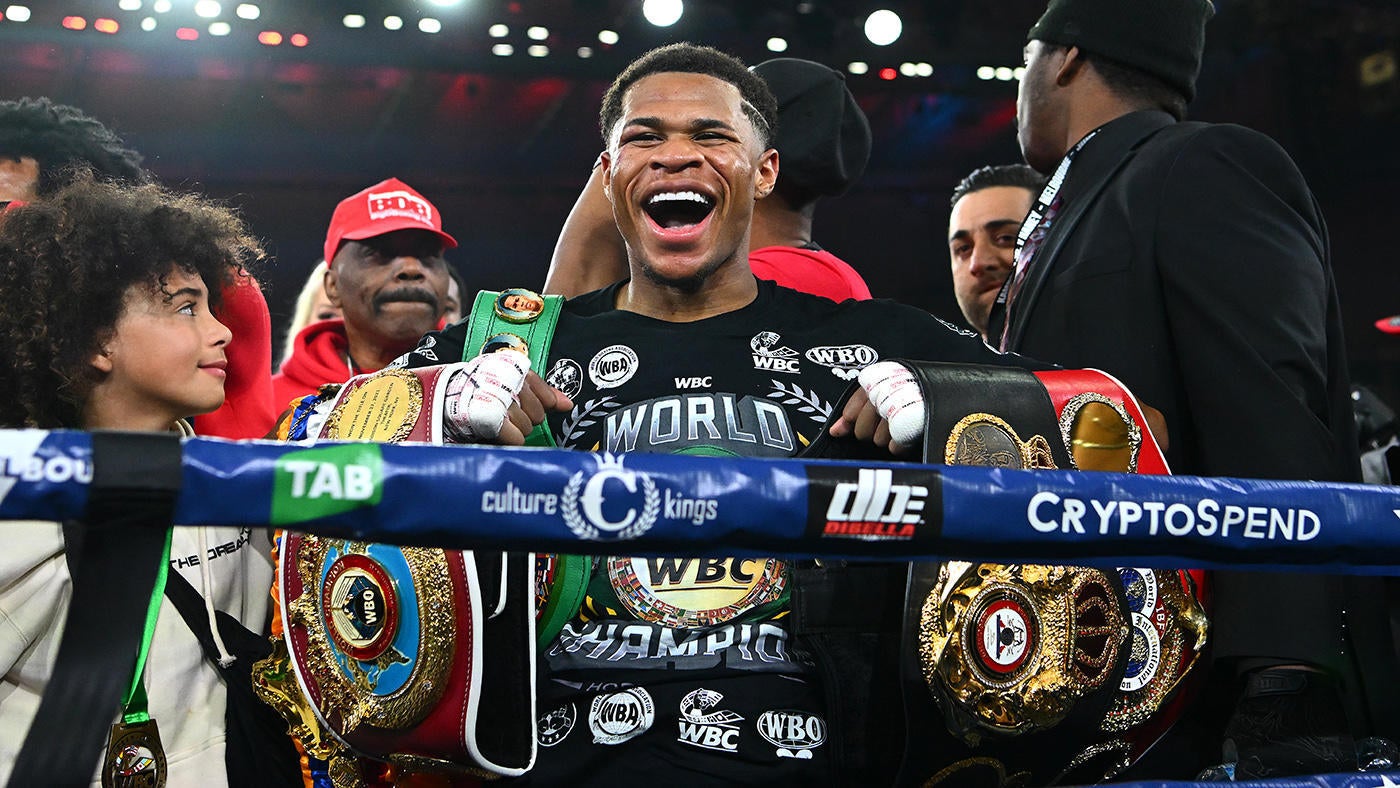 From turning pro in Mexico at age 17 to dominating George Kambosos Jr. in June while capturing the undisputed lightweight championship, 23-year-old Devin Haney has made his journey from promising upstart to inclusion among the pound-for-pound best in the game as unique as possible.

“It has been a long time coming, but the world is finally giving me my respect,” Haney told “Morning Kombat” last month. ” I’m thankful for it and I thank God for it. They will only start respecting me and liking me more because I’m only getting better.”

To suggest Haney (28-0, 15 KOs) is living the dream would be an understatement. Not only have a recent four-pack of wins over former world champions Yuriorkis Gamboa, Jorge Linares, Joseph Diaz Jr. and Kambosos validated the hype which followed him into the pro ranks, Haney’s nickname — “The Dream” — suggests this was part of Bill Haney’s plan all along as the father, trainer and manager of a skilled fighter with a certain in-ring maturity which belies his young age.

“I think I was just born to be in this position. I thank God for it,” Haney said. “I’m blessed with super talent, IQ in the ring. I trust my skills when I’m in the ring. Nothing really worries because I know the work I put in and the skillset that I have.”

There’s just one issue, however, entering Saturday’s rematch against Kambosos (20-1, 10 KOs) in Melbourne, Australia: The buzz for the fight (10:30 p.m. ET, ESPN), at least stateside, is virtually non-existent after Haney went largely untouched in June at Marvel Stadium to win a unanimous decision.

Asked if he’s excited to travel to Kambosos’ backyard for a second helping, Haney was honest in saying, “I had no choice. I signed up for it not once but twice.”

For Team Haney, signing the two-fight deal, which included an immediate rematch clause for Kambosos, turned out to be a necessary evil. Ever since he was a teenager, Haney has had major networks and promoters aggressively courting his services, including Floyd Mayweather, the retired five-division champion turned promoter whom Haney is often compared to given his sublime technical skill.

Haney decided early to buck the trend of going the amateur and Olympic route to turn pro while still in high school, taking 10 of his first 15 pro bouts south of the border. Following a featured run as a headliner on Showtime’s “ShoBox: The New Generation” series, Haney signed with DAZN and U.K.-based promoter Eddie Hearn of Matchroom Sport.

“That was one of our main things that me and my father have set out to do, and that’s control our own destiny,” Haney said. “We made the right decisions up to this point from promoter to promoter and from network to network.”

The decision to jump to ESPN and sign a lucrative three-fight deal with Top Rank meant he also needed to acquiesce to Kambosos, an aggressive Australian who had shocked the world in late 2021 by upsetting unbeaten Teofimo Lopez Jr. to become the new king of a star-studded 135-pound division filled with the likes of Gervonta Davis, Ryan Garcia, former champion Vasiliy Lomachenko and, just recently, unbeaten and two-division titleholder Shakur Stevenson.

Unlike the brawling success he had against an uncharacteristically rabid Lopez, who has subsequently moved up to 140 pounds, Kambosos never quite got out of the blocks against Haney. While the fight was certainly a big event in Australia, it was Haney who sucked every bit of electricity out of the fight by disarming Kambosos, who was criticized for not risking it all knowing he had a mandatory rematch to cash in on.

“[The first fight] was easy because I made it look easy in there, and [Saturday] we are looking to do the same,” Haney said. “I feel that I’m at a different level than Kambosos, and once again I will make him look like he’s an average and regular fighter. He’s not, but I’m going to make him look like that [again].

“I just think that I didn’t give him those type of looks or any kind of openings. If he could have went in there and did what he did against Teo, he would have done it. He just couldn’t. I think that was all an excuse for him to say he had the rematch or didn’t have the drive and hunger. It’s not true.”

Oddsmakers expect Haney, who has been installed as high as an 11-1 favorite, to have similar success on Saturday. The fighter agreed, saying he expects an increase in aggression from Kambosos to create even more openings to counter.

But it’s what might be next for the 135-pound king with a second straight win that has Haney — and boxing fans alike — so excited.

Although Haney said he welcomes a future challenge from Stevenson (19-0, 9 KOs), who is also with Top Rank and has joined Haney in garnering recent P4P acclaim, “The Dream” believes the 34-year-old Lomachenko (16-2, 11 KOs) to be the perfect challenge for the final bout of his current three-fight deal, should the Ukranian star get past unbeaten Jamaine Ortiz on Oct. 29.

“There are so many good fights in the 135-pound division, [but] a good fight for me right now is Loma,” Haney said. “It’s a fight that the fans would love to see and I would get the most credit for it. That’s definitely a fight I could get up for and get super motivated to test my skills and see how great I really am.”

A native of San Francisco, it was Las Vegas where Haney came of age as a boxer. At age 12, he believes he first acquired the “tunnel vision” necessary to set a course to one day become the best in the world and ultimately remembered among history’s best boxers.

Armed with a sharp mind and deep-rooted confidence, Haney is anything but a dynamic personality outside of the ring. Yet he believes the money and fame will eventually come the more his success leads him to an eventual spot as a pay-per-view attraction. Although he has a few highlight-reel finishes to his ledger (his 2019 KO of Antonio Moran was as vicious as it was gorgeous), Haney will also likely never be the kind of fighter to welcome unnecessary danger in order to gain his critics’ approval.

The same critics who have regularly tabbed Haney as a boring fighter also clung to the narrative that he might have a suspect chin after he was wobbled to close Round 10 of a 2021 win over Linares that saw Haney fight cautiously until the final bell.

“I mean, it’s boxing. You never know if someone has a chin until they have to use it,” Haney said. “It’s hard to swim without getting wet, but I took it. They can say what they want, but the same people that were criticizing me are now giving me my respect.

“At the end of the day, it’s hit and not get hit. That’s the art of boxing. Sometimes, you can get into those kind of fights. But if you are winning easily and can get out of a fight unmarked, why not do that? Nobody likes taking punches, I don’t care who you are.”

One thing Haney wouldn’t change is every step it took to get him to where he is today, on the verge of critical and commercial breakthrough for a fighter who began his pro career fighting inside a pool hall in Tijuana and will continue this weekend headlining Rod Laver Arena far away on another continent.

“[My journey] wasn’t an easy process, but it was definitely a dream. My story is unique,” Haney said. “It has definitely been a roller coaster to get to where I am at but it all contributed to where I am right now. I feel I would still be here had I gone a different route but maybe I wouldn’t be so dominant.”