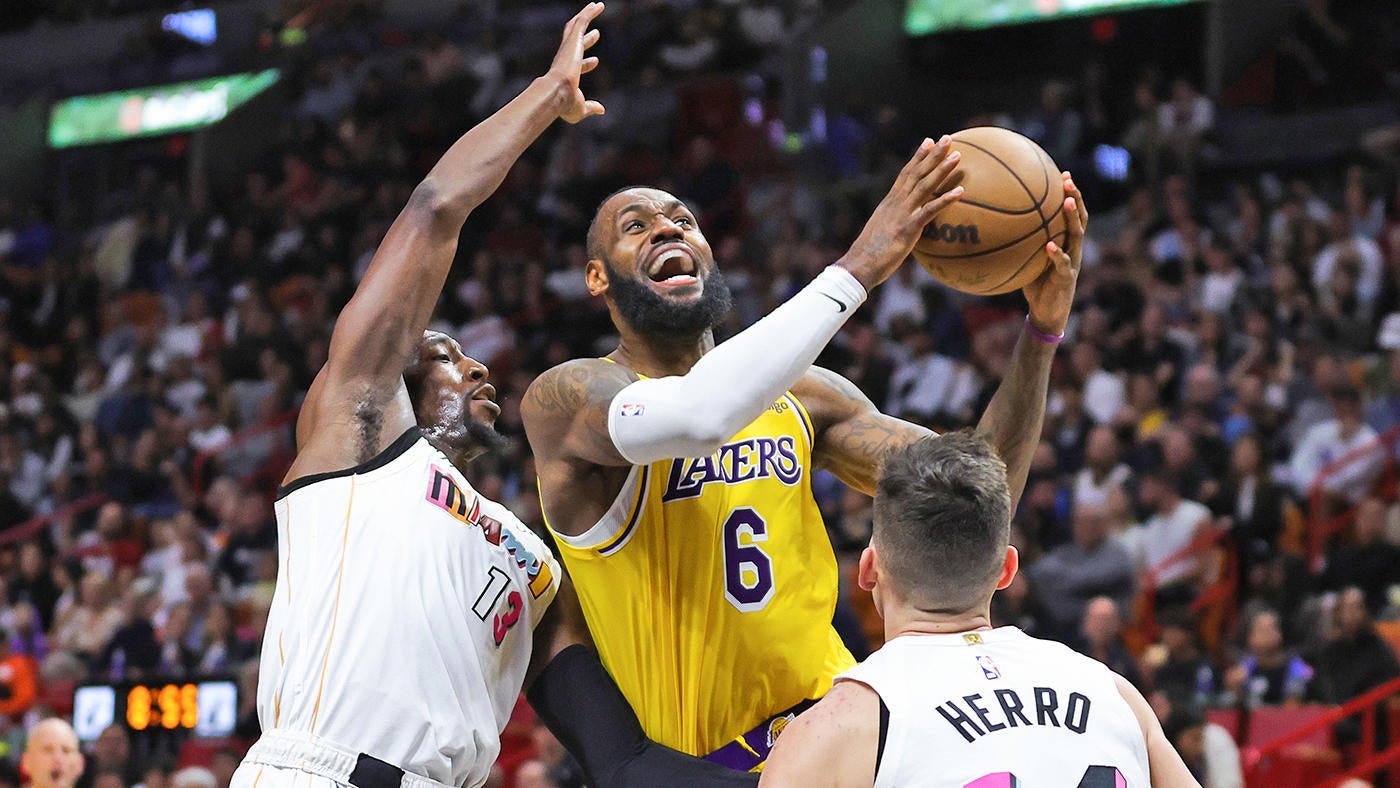 Playing the Miami Heat on the second game of a road back-to-back is never a fun time for any team, but the experience was especially rough for the short-handed Los Angeles Lakers on Wednesday night. The Lakers turned the ball over 26 times and trailed by as much as 22 en route to a 112-98 defeat, their fifth in the past six games.

LeBron James had six of those turnovers, but otherwise did as much as he could and finished with 27 points, nine rebounds and six assists on 10-of-18 from the field. Without Anthony Davis, though, the Lakers just don’t have enough talent and fall to 14-21 on the season.

Now three games out of even a play-in tournament spot, the reality is setting in that the Lakers may miss the playoffs for the third time in five seasons since James arrived at Los Angeles in 2018. With the Lakers struggling and his 38th birthday just two days away on Dec. 30, James was asked some big picture questions about what’s going through is mind these days and how much longer he wants to play.

In an uncharacteristic response that suggested the totality of the Lakers’ situation is draining some of his enthusiasm, he said he no longer wants to play basketball just to play. He wants to win.

“I don’t have a number [of years I can keep playing],” James said. “As long as my mind stays in it, I can play at this level for a minute. It’s up to my mind. My body is gonna be OK, because if my mind is into it I’ll make sure my body is taken care of, and I’ll continue to put in the work.

“I’m a winner and I want to win. I want to win and give myself a chance to win, and still compete for championships. That’s always been my passion and goal since I entered the league as an 18-year-old kid out of Akron, Ohio. I know it takes steps to get there, but once you get there and know how to get there — playing basketball at this level just to be playing basketball is not in my DNA. It’s not in my DNA anymore. We’ll see what happens and see how fresh my mind stays over the next couple years.”

Lakers point guard Dennis Schroder claimed in an interview earlier this month that James wants to play until he’s 45. “I asked him how much longer he wants to play and he said he wants to play for five to seven more years,” Schroder said. “He’s turning 38 now, he says 45.”

The widely held belief around the league is that James wants to play with his oldest son, Bronny, and that would require him playing until he’s at least 40. Bronny James is a high school senior and is expected to enter the league via the 2024 NBA Draft, though there’s still much to be determined about his NBA prospects.

James is no longer the unquestioned top player in the league, but he’s still among the top tier in his 20th season. Through 27 games he’s averaging 27.8 points, 8 rebounds and 6.6 assists per game, while shooting 49.7 percent from the field. He’ll go to his 19th All-Star Game in a few months and has a good chance to make his 19th All-NBA apperance if he stays healthy.

But as special as James’ longevity is, everyone’s career has to come to an end at some point and that fact is on his mind.

“I think about how much longer I’m gonna play the game,” James said. “I think about how I don’t want to finish my career playing at this level, from a team aspect. I want to still be able to compete for championships because I know what I can bring to any ball club with the right pieces. I think about my son graduating high school soon and going off to college and I’m still playing and my youngest son will be a junior next year and how much more time I’ll miss.

“Throughout the course of a day, to the weeks, to the months, I think about a little bit of everything. Think about how much of the world I’m gonna see when I’m done playing the game. But at the end of the day I keep the main thing the main thing, and when it’s time for us to work, I lock in. When I have an opportunity to have a day off, I’m still kind of locked in, but I do give myself an opportunity to decompress a little bit by watching other teams or watching shows or spending time with my family. Lot of thoughts, but for the most part it’s been a good ride so far.”

James agreed to a two-year, $97.1 million extension with the Lakers in the offseason that includes a player option for the 2024-25 season. That extension put him on the same timeline as Davis, who also has the ability to opt out in the summer of 2024. The assumption was that the Lakers had a two-year window to build around those two superstars, but given Davis’ continued injury problems, the team’s disappointing performances and James’ newest comments, it’s fair to wonder if they’ll even get that long.