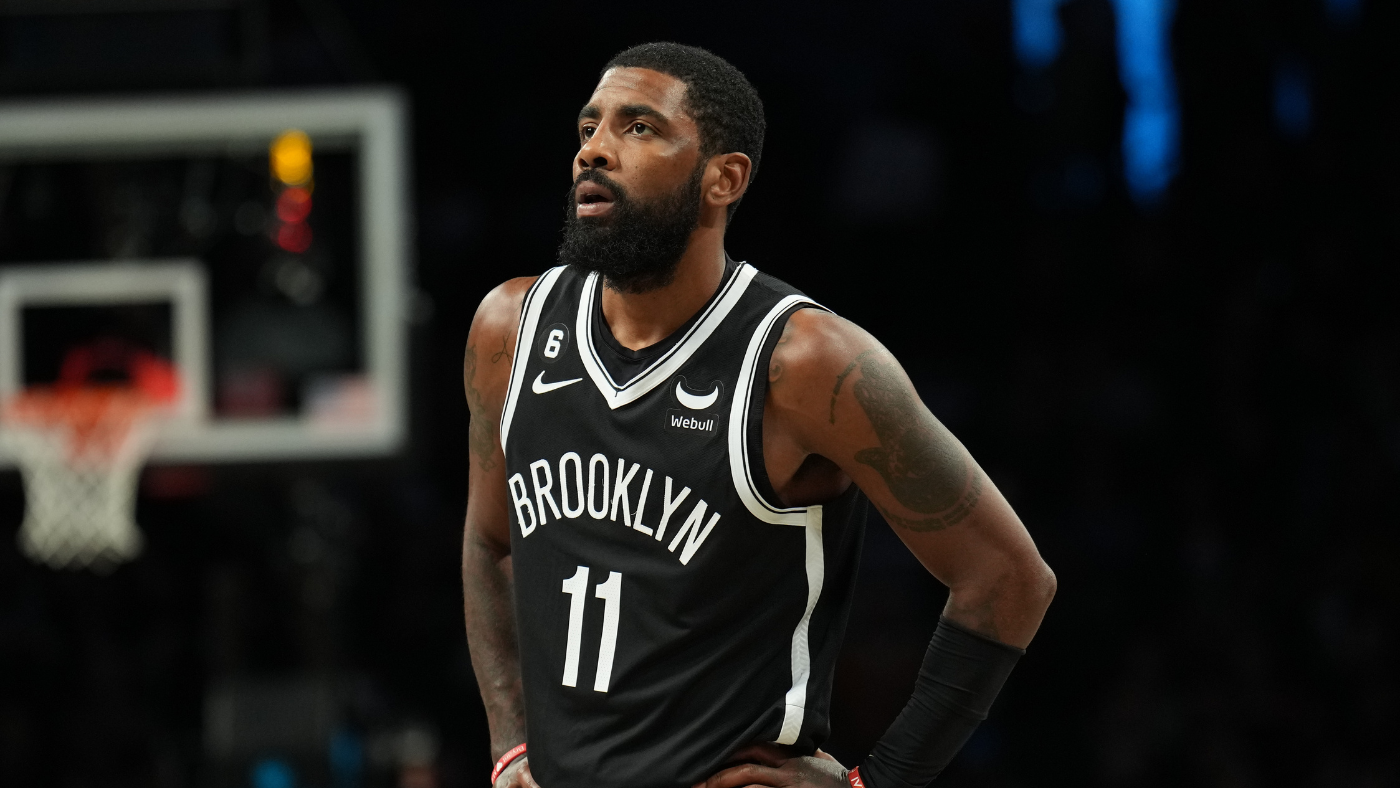 [UPDATE: The Brooklyn Nets have suspended Kyrie Irving for a minimum of five games without pay. On Thursday night, they announced that they “were dismayed today, when given an opportunity in a media session, that Kyrie refused to unequivocally say he has no antisemitic beliefs, nor acknowledge specific hateful material in the film.” Irving will be suspended “until he satisfies a series of objective remedial measures that address the harmful impact of his conduct,” and he is “currently unfit to be associated with the Brooklyn Nets,” according to the team-issued press release.]

NEW YORK — Less than 40 minutes after the NBA released a statement from commissioner Adam Silver expressing disappointment that Kyrie Irving did not apologize for publicizing a film full of “deeply offensive antisemitic material” and “vile and harmful content,” the Brooklyn Nets guard again refused to say he is sorry.

Irving posted the link to “Hebrews To Negroes: Wake Up Black America” last Thursday. A week later, asked if he is sorry for the hurt that his post had caused people, he said: “I take my responsibility for posting that. Some things that were questionable in there, untrue. Like I said in the first time when you guys were asking me when I was sitting on that stage, I don’t believe everything that everybody posts. It’s a documentary, so I take my responsibility.”

The follow-up question, in light of the NBA’s press release: Was his joint statement with the Nets and the Anti-Defamation League meant to constitute an apology, or is he not apologizing?

“I didn’t mean to cause any harm,” Irving said. “I’m not the one that made a documentary.”

Asked directly if he has any antisemitic beliefs, Irving said: “Again, I’m going to repeat I don’t know how the label becomes justified because you guys ask me the same questions over and over again. But this is not going to turn into a spin-around cycle, questions upon questions. I told you guys how I felt. I respect all walks of life and embrace all walks of life. That’s where I sit.”

Irving did not directly answer whether or not he was surprised that people were hurt by his social media posts. “I think I can ask a better question,” he said. “Where were you when I was a kid figuring out that 300 million of my ancestors was buried in America? Where were you guys asking those same questions when I was a kid dealing with learning about the traumatic events of my familial history? And what I’m proud to come from.”

Later in the same response, Irving said, “I’m not here to compare anyone’s atrocities. Or tragic events that their families have dealt with in generations of time. I’m just here to continue to expose things that our world continues to put in darkness. I’m a light. I’m a beacon of light. That’s what I’m here to do. You guys ask me questions about basketball, I give you my expert opinion. You guys ask me about other things, I give you my opinion and it’s meant with whatever you believe the perception or the deception is.”

Irving, who had not spoken to reporters since getting into a spat with one after a game against the Indiana Pacers on Oct. 29, griped that he was “here answering questions of whether or not I’m sorry or not on something I didn’t create, and it was something I shared, and I’m telling everybody I’m taking responsibility.”

The film that Irving posted is full of antisemitic tropes, including a fake quote stating, “The Jews have established five major falsehoods which work to conceal their nature and protect their status and power,” including “That 6 million people were killed in a holocaust during WWII.”

“Those falsehoods are unfortunate,” Irving said. “And it’s not that I don’t believe in the Holocaust. I never said that. I never, ever have said it. It has not come out of my mouth. I never tweeted it. I never liked anything like it. So the Holocaust in itself is an event that means something to a large group of people that suffered something that could have been avoided.”

Irving did not fully denounce the film, which he said: “may have had some unfortunate falsehoods in it.” Asked what specifically was in the film that he doesn’t believe, he said: “I think some of the criticism of the Jewish faith and the community, for sure. Some points in there that were unfortunate.”

Before the joint statement was released, the New York Daily News‘ Stefan Bondy reported that Irving had sent his father and stepmother/agent to meet with the Anti-Defamation League. Asked if he had personally met with the ADL, Irving said, “I was informed that they wanted to have a meeting, and we handled it.”

A Nets staffer then ended the media scrum, and Irving walked away, ignoring a reporter asking him for clarification.