After more than 45 years of writing a daily syndicated newspaper column against deadline, at age 95 my time has come to retire. I’m leaving the task to younger journalists who will enjoy the close association I had all those years, sitting silently in the backseat of the cars of many of the real and would-be giants of American politics and history.

In the process, I have been privileged to accompany them and listen to their private wisdom and sometimes folly, jotting down the best and worst comments of each in my columns for the edification and education of my readers.

I first got the political bug when, in the summer of 1948, I hopped on a train to Philadelphia and hung around outside the Republican National Convention that nominated Thomas E. Dewey for president. It culminated when I came to know Joe Biden. I wrote the first biography about him back in 2010, when he was still vice president.

Over the years, I met and interviewed the father of Anne Frank in Amsterdam, and in Atlanta, Dr. Martin Luther King — both off my usual beat. At the Pentagon in 1965, I stumbled onto the story of a young soldier, distraught over a marital dispute, who climbed onto the nose of a nuclear bomb and threatened somehow to ignite it. Fortunately, he failed, but the story drew national attention to my reporting for the first time.

As chronicled by Timothy Crouse in “The Boys on the Bus,” his best-selling insider book of the era, Richard Nixon, Spiro Agnew, Robert F. Kennedy, George McGovern and Jimmy Carter were among the personalities I covered then. I continued through the presidencies of Ronald Reagan, Bill Clinton and on up to the present day.

But the 1968 campaign of RFK remains the most vivid in my memory. I was in the kitchen of the Ambassador Hotel in Los Angeles when he was shot by an assassin, falling to the ground at my feet. I observed from atop a table as the killer struggled with two burly Kennedy bodyguards, who wrestled the gun from him before my horrified eyes. I recounted it in my first book, “85 Days.”

Tragedy sometimes seemed to haunt my labors hereafter. I was in Minnesota during the re-election campaign of Sen. Paul Wellstone when he and his wife were killed in a small plane crash. Sen. Ted Kennedy (coincidentally, himself a survivor of a plane crash) and I awaited his return at the Wellstone campaign headquarters.

I also remember another favorite politician on the campaign trail, Democratic Gov. George Wallace of Alabama, who survived an assassination attempt that left him wheelchair-bound. I once stood with him at the window of his hotel room at one governors’ conference at a seaside resort, as he looked down sadly at colleagues frolicking in the beachfront below.

Not all the memories were so serious or without comic relief, as long as Sen. Robert Dole was around. Shortly after the assassination of Egypt’s President Anwar Sadat, the Kansas Republican noted that President Ronald Reagan had appointed as his representatives to the funeral three former presidents — Jerry Ford, Jimmy Carter, and Richard Nixon. Dole described them as “See no evil, speak no evil — and evil.”

I followed Richard Nixon in 1966, as he began positioning himself for a presidential run, and described it in my second book, “The Resurrection of Richard Nixon.” Reporters at the time were not breaking down the doors to cover the third candidacy of a two-time loser for the job.

One morning in Birmingham, Alabama, because of a scheduling mix-up, I had to hail a taxi to the airport, fearing I had missed the Nixon plane. I scrambled aboard the plane, mortified to see Nixon sitting patiently in his regular seat. I apologized profusely for holding him up, but he politely waved me off. I discovered later that his staff had wanted to leave without me, but he had protested, “No, he’s the only reporter we’ve got.”

When writing my book on 1968, “The Year the Dream Died,” I unearthed documents revealing that outgoing President Lyndon Johnson had turned over to Democratic nominee Hubert Humphrey incriminating evidence that Nixon had tried to broker a secret deal with the South Vietnamese president to monkey-wrench peace negotiations then taking place in Paris. Any peace accord at Paris, Nixon thought, would seal a Democratic victory in the presidential election. Humphrey chose not to use the intelligence Johnson had supplied to him.

It was a revelation hardly comparable to Bob Woodward’s account of the depth and viciousness of Donald Trump’s intention, in his own words, to sabotage the 2020 election of Joe Biden. But it was a revelation that has provided more raw material for old reporters like me.

For all the focus on American politics in my columns and 20 books, the most rewarding event during my long engagement of being a witness to history actually has little to do with politics.

During the 1956 revolution in Hungary, I was on a Reid Fellowship and writing for a small New York paper. One night I joined other reporters crossing the Austrian border into southern Hungary, and assisted a group of refugees to asylum in the Austrian village of Andau. Among them was a young man who spoke some English. I managed to negotiate much red tape and sponsored his and his wife’s entrance into the United States as part of a resettlement program run by the State Department. He later became an American citizen and an ordained minister, who later presided at my marriage to my wife, Marion Elizabeth Rodgers.

In short, I retire with a sense of both professional and personal satisfaction over my lifetime course of writing about American politics and history, that leaves me with no regrets. 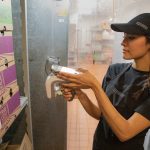 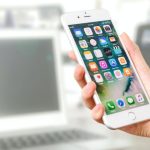 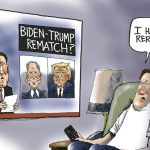