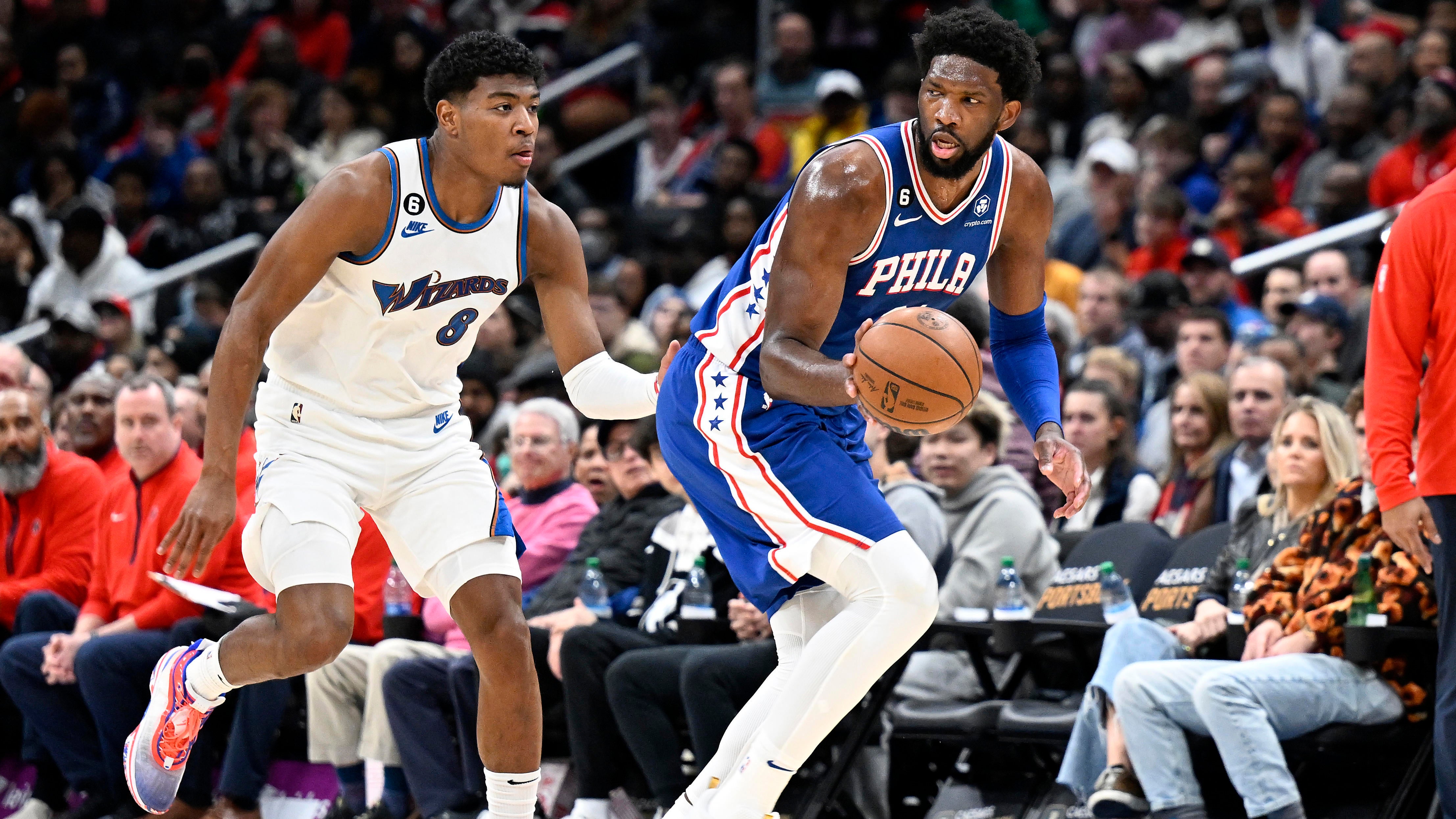 The Philadelphia 76ers have been rising up the Eastern Conference with eight straight victories, but the streak, despite a 48-point performance from Joel Embiid, came to an end with a 116-111 loss to the Washington Wizards on Tuesday night.

It was Embiid’s sixth 40-point game this season and the 32nd of his career, moving him past Wilt Chamberlain for the second-most such outputs in franchise history, trailing only Allen Iverson. Embiid has a long way to go to catch A.I., who totaled 76 40-point games in a Sixers uniform.

The MVP race is super crowded at the top right now, and Embiid, who has finished second to Nikola Jokic each of the last two years, is right there in the mix again. He leads the league in scoring at over 33 a night. He’s top five in PER and the anchor of what has been a top-five defense. This game is just another bullet point on the ever-growing MVP resume.

James Harden, who came in having combined for 34 assists in his previous two games, had another strong outing with 26 points and 13 assists, but there wasn’t much support from the role players. De’Anthony Melton, who’s been superb over the last month, finished with just six points. Georges Niang, who has been a consistent 3-point shooter all season (43 percent), went just 1 of 7 from deep.

As a team, the Sixers, who register as one of the most accurate 3-point shooting teams in the league this season, made just six of 31 3s in Washington. After trailing by as many as 16 in the third quarter, the Sixers trimmed their deficit all the way to one, but ultimately were only able to score six points over the final five minutes — and three of those came courtesy of a last-gasp 3 by Embiid when the Sixers were down six with six seconds to go.

Philadelphia’s late-game offense has been a point of concern all season. In clutch minutes, categorized as a game being within five points during the final five minutes, the Sixers entered Tuesday night with the 24th-ranked offense in the league. Their defense has been stout in those minutes with the third-best defensive rating, and that was true again on Tuesday as Philly allowed Washington just one field goal over the final five minutes. The Wizards could not generate quality looks down the stretch.

But neither could the Sixers, and that includes Embiid, who had a pair of costly turnovers and a missed free throw on high-leverage possessions. Tyrese Maxey will help in these situations as an attacker/shooter against defenses forced to shift out of the two-man game between Harden and Embiid, but that doesn’t alleviate all concern. Any Harden offense is always on the verge of stagnancy. Doc Rivers hasn’t exactly proven to be the most creative offensive architect. And that devolve-into-isos DNA is always a threat to pop up at the wrong time.

That’s big-picture stuff. For now, this is just one loss. Nobody is going to get worked up. But it should be noted that the Sixers’ win streak didn’t exactly come against the stiffest competition. Five of the wins came against sub-.500 opponents: the Pistons, Raptors, Warriors (absent the services of Stephen Curry, Draymond Green and Andrew Wiggins), Hornets and Lakers. Two of the other three were against the Knicks and Kings. The best win was against the Clippers with both Kawhi Leonard and Paul George in the lineup.

Make of that what you will. The Sixers should be considered among the at least the second-tier contenders in the East, but there is context to even this recent stretch of success.