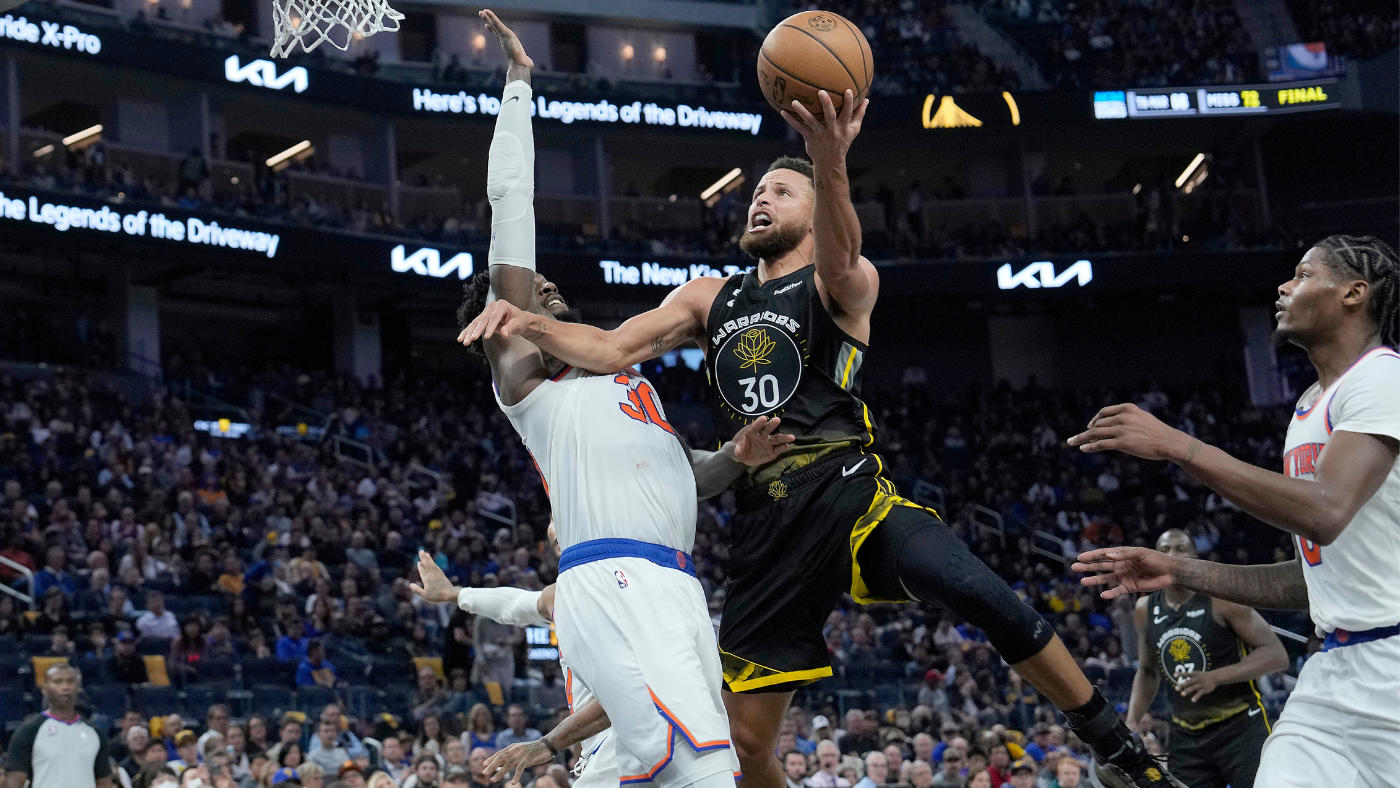 The defending champion Golden State Warriors are off to a frustrating start this season that currently has them outside of even the play-in picture in the crowded Western Conference. Even more concerning, they’re under .500 despite some truly brilliant play from Steph Curry.

Through his first 15 games, Curry is averaging 32.2 points, 6.7 rebounds and 6.6 assists per game, while shooting 52.8 percent from the field, 44.3 percent from 3-point land and 90.9 percent from the free-throw line. He’s third in the league in scoring, leads the league by a wide margin in 3-pointers made (77, compared to 55 for Buddy Hield, who is in second place) and is on pace to join Larry Bird and Steve Nash as the only players with multiple 50/40/90 seasons.

As per usual, much of Curry’s dominance has come from outside the arc. Looking even closer than the basic stats, he’s shooting an absurd 46.8 percent on off-the-dribble 3s this season. To put that in perspective, of the players taking at least five off-the-dribble 3s per game, Donovan Mitchell is the only other one shooting over 40 percent on those attempts. You could go on and on about his shooting, though, and that topic has been covered in-depth over the years.

Instead, it’s worth taking a closer look at Curry’s scoring closer to the basket, which has been an underrated aspect of his hot start. Overall, his 5.7 two-point makes per game and 63.7 field goal percentage inside the arc are both career-highs, which has helped drive up his efficiency. His driving and finishing in the paint, though, is what stands out.

Within three feet, he’s making a stunning 79.1 percent of his attempts, per Basketball-Reference, which is also a career-best. On shots defined as “at the rim” by Synergy Sports, he’s scoring 1.522 points per possession, which puts him in the same tier of efficiency as big men like Nikola Jokic and Karl-Anthony Towns. The NBA‘s stats site has him at 76.4 percent in the restricted area, and of the players with at least as many attempts as Curry’s 55, he has been the 12th most efficient; among those 12 players, only Donovan Mitchell is shorter than him.

However you want to break it down, Curry has been special around the basket.

“Knowing I can shoot the ball and put a lot of pressure on the defenses there, you gotta be able to have a change-up to get to the paint and find creative ways to finish,” Curry said after the Warriors’ win over the Cleveland Cavaliers on Nov. 11. “I’m not playing above the rim, so it’s just about playing angles and having some touch in there. Gotta use your shot as a threat to open up driving lanes, and I’ve been able to do that. Even coming off great screens from guys, not being afraid of contact either. I don’t get to the foul line that much, but still just trying to figure out how to get your lane, get your driving angle, protect the ball, get it on the rim, and hope it goes in.”

Curry, of course, gets some transition looks and caught defenders cheating with backdoor cuts. The vast majority of his looks in the paint have not been easy, however, which makes what he’s doing even more impressive. Here’s a closer look at some specific aspects of his attack that have stuck out.

As he mentioned, just because he doesn’t play above the rim — he has zero dunks this season — doesn’t mean he has to be afraid of contact. He’s never going to jump over opponents, but he can still use physicality to his advantage. One way to do that as a guard is to jump first and initiate the contact.

Watch how Curry drives, gets off before Julius Randle, and goes straight into his chest. This keeps Randle ground-bound and prevents him from truly challenging the layup.

Against the Detroit Pistons we saw an extreme example as Curry came downhill in the pick-and-roll and left his feet near the dotted circle well before Isaiah Stewart was ready. Curry leans into Stewart to keep him on his hip and glides to the basket unopposed.

To finish in the paint, you first have to get there, and Curry has been brilliant as a ballhandler. While he’s always had one of the best handles in the league, he’s been known to get sloppy in possession. This season he’s turning it over just 2.7 times per game, the second-lowest mark of his career; he’s had the ball on a string and has been using that control for cooking defenders on the perimeter. One of his favorite tricks this season has been a behind-the-back move to his right hand.

Some of his finishes have been so outrageous that it’s fair to wonder if he can keep converting at this high of a clip. At the same time, after everything he’s accomplished throughout his career, you usually don’t want to get into the game of doubting Steph Curry.

“You run out of adjectives to describe Steph’s play. He’s just amazing night after night,” Steve Kerr said. “He’s in such great shape. If there’s one area where he’s dramatically better now than when I first got here, it’s his strength and conditioning. He’s much bigger and stronger, capable of defending at a high level and sustaining two-way basketball for an entire game. And just knocking down shots from all over and finishing at the rim. He’s unbelievable.”