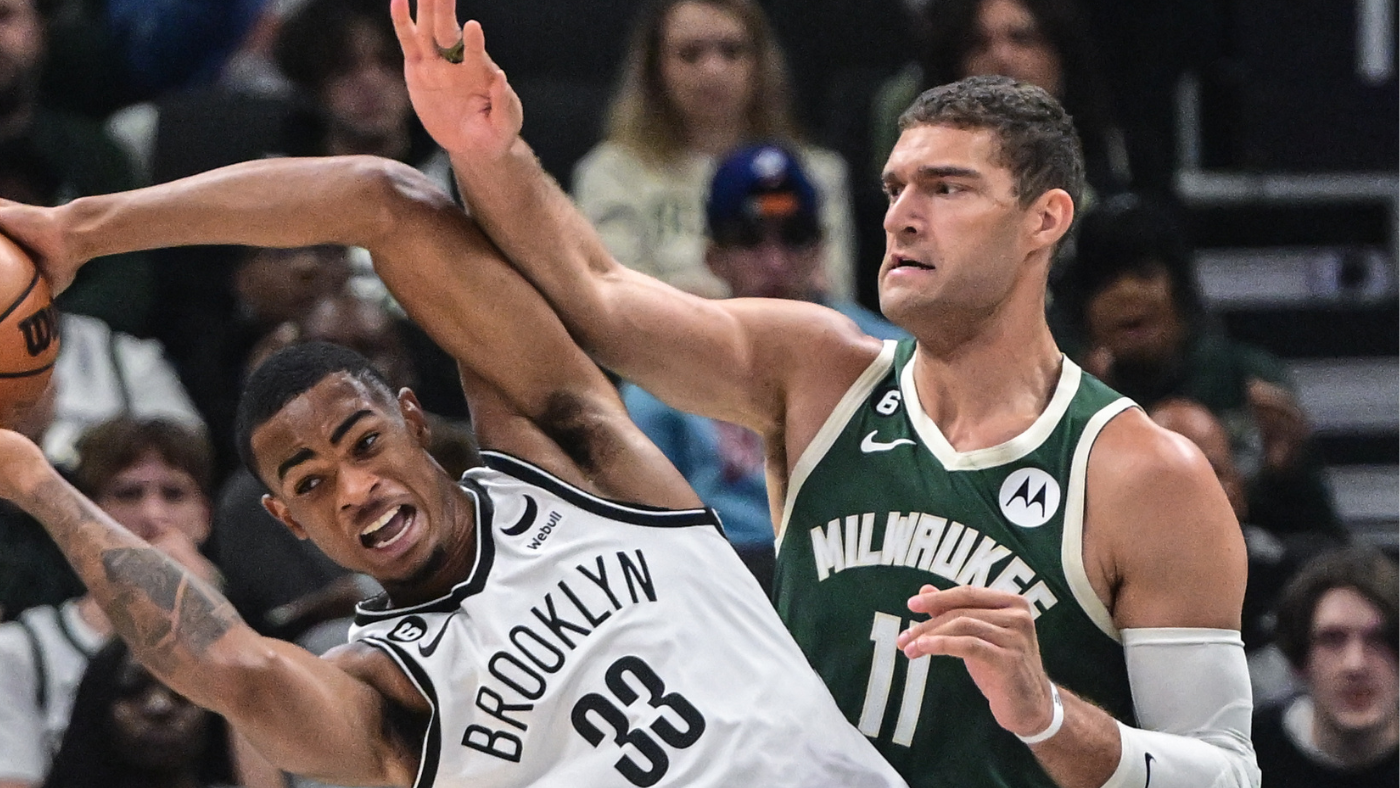 MILWAUKEE — Even by the standards of NBA big men, Joel Embiid is gargantuan. He stands 7 feet tall, weighs 280 pounds and bulldozes most opponents given the unenviable task of guarding him one-on-one.

Milwaukee Bucks center Brook Lopez is not most opponents. Embiid should know this, but if he needed a reminder, he got one on Oct. 20 in the Bucks’ season opener. Embiid had the ball on the perimeter and the shot clock was winding down, with Lopez in between him and the basket. He took two dribbles, lowered his shoulder and then, as the Bucks’ Bobby Portis recalled nine days later, laughing, the Philadelphia 76ers star ran into some trouble.

“I mean, shoot, Game 1, you want to look at opening night against Embiid,” Portis said. “I think Embiid bumped him, got him off balance. Embiid tried to go up and dunk on him, and—nah, not in here.”

Embiid, not Lopez, wound up on his back after the collision. And in the Bucks’ 90-88 win, Lopez limited Embiid to 15 points on 6-for-21 shooting, by far his worst performance of the season.

Since then, the league has learned the same lesson that Embiid did: Lopez, who had back surgery last December and missed most of the 2021-22 season, is every bit the defender he was pre-injury. Milwaukee is 9-0, the only undefeated team in the NBA, on the strength of its league-best defense (100.6 points per 100 possessions), anchored by a 34-year-old comic book nerd whose superpower is protecting the rim.

“We’ve been very confident, very aggressive and we’ve used our size to our advantage,” Lopez said. “Our team is definitely the best defensive team in the NBA. That’s something we can do every single night regardless of how we’re shooting.”

“Brook is Brook,” Milwaukee guard George Hill said. “This is the Brook we’ve been missing since last year. He’s healthy, had a great summer and he’s playing like the old Brook.”

The old Brook patrolled the paint while opponents launched 3s with relative impunity. This was by design; coach Mike Budenholzer arrived in 2018 with a defensive scheme that prioritized the most valuable real estate on the court. In Budenholzer’s first four seasons, the Bucks were first, first, third and first in 3-point attempts allowed. Last year, their opponents shot 40.1 3s per game, the most in NBA history.

Overall, that philosophy has been successful. The Bucks went 213-96 in those four seasons, made at least the second round of the playoffs every time and, in 2021, won their first title in 50 years. Surrendering open 3s is playing with fire, though, and in certain situations, they’ve been burned. The Miami Heat hit 75 3s in five games to knock Milwaukee out of the playoffs in 2020, and the Boston Celtics hit 22 3s in Game 7 of the second round five-and-a-half months ago, the game in which the Bucks dared Grant Williams to beat them and he did.

This summer, Budenholzer made an adjustment. Milwaukee is no longer content to give up 3s. Defenders are staying attached to shooters, running them off the line and limiting opponents to 32.0 3-point attempts per game, a drastic drop.

The amazing part: The Bucks still rank fifth in limiting rim attempts, just like they did last season, per Cleaning The Glass. They have pulled off this magic trick by funneling opponents into the mid-range area, where Lopez is typically waiting. From there, drivers are trapped in a web; they have to either pull up for a long 2, try a floater over Lopez’s long arms or find a kickout pass. Opposing teams have taken 20.8 shots per game from 10 to 19 feet against Milwaukee, which is the most in the league, and shooting 40.6 percent on those opportunities.

“[The new scheme has] been great,” Lopez said. “It takes everyone to buy in and everyone to trust one another that we’re gonna have our guys where they are at all times. Then you have that peace of mind and trust and belief so you can go and guard your guy, do your job and know that there’s guys behind you.”

More than anything, this style requires the Bucks to trust Lopez. They rely on him to clean up for sometimes-overaggressive perimeter defenders and be the communication hub on every possession.

“I don’t see it as pressure or anything like that,” Lopez said. “I enjoy—I relish my responsibilities on the defensive end and I like to go out there and take care of them every night.”

Lopez studies the tendencies of opposing guards and bigs, so he can tweak his approach accordingly. For years, he has been one of the premier practitioners of drop coverage, which requires him to play cat-and-mouse in the pick-and-roll. He’s effectively tasked with guarding the ballhandler and the screener simultaneously, deterring the former without letting the latter sneak behind him.

This is where Lopez shines. “You want to be in control, you don’t want to be out of position,” Lopez said. The trick is to stay on balance and avoid committing to either player until the last possible moment. Ideally, once he has read the situation, “it’s essentially one movement, being as efficient as possible,” whether he’s springing out to contest a floater or tracking back to disrupt a lob.

“He does a great job at that, he’s probably one of the best in the league at doing that,” Pistons head coach Dwane Casey said. “Once he uncoils he’s like an eclipse.”

Portis said Lopez’s presence “changes the game for us” and “makes the game easy.” Bucks superstar Giannis Antetokounmpo credited him for doing “all the unseen work” that teammates appreciate. If you can no longer find clean looks from 3-point range against the Bucks and you still have to deal with Lopez in the paint, good luck.

“Whenever he’s out there, you can [exhale],” Antetokounmpo continued, taking a deep, exaggerated breath at the podium. “Thank God he’s out there.”