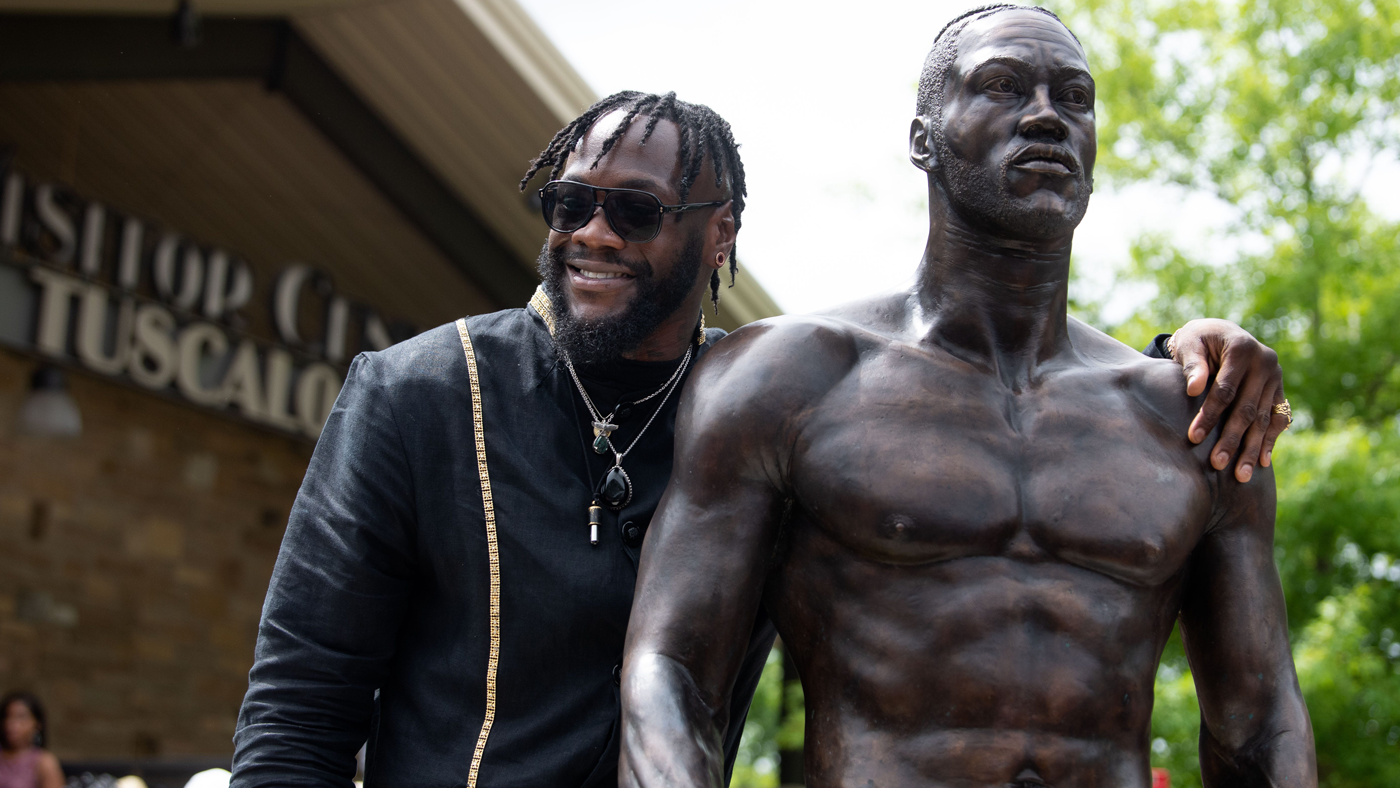 Last October, following the conclusion of his violent knockout loss to Tyson Fury in their all-action heavyweight championship trilogy bout, Deontay Wilder believed in his heart he was 85% ready to retire.

Wilder (42-2-1, 41 KOs), with a career knockout percentage just over 91% and a reputation as possibly the greatest right-handed knockout threat in boxing history, certainly had plenty to be prideful about over his 13-year pro career. Having not picked up the sport until age 19 when he needed money to support his newborn daughter’s spina bifida diagnosis, Wilder went on to win a bronze medal at the 2008 Olympics before making 10 defenses of his WBC title, good for fifth best in heavyweight history.

The one thing the 36-year-old slugger had largely lacked, however, was the feeling of love and respect by those inside the boxing community.

Despite his exciting style and 6-foot-7 tattooed frame, Wilder was never fully embraced by the American sporting public that often criticized his lack of fundamental boxing skills. The way he handled himself following his first pro defeat, a TKO loss to Fury in their 2020 rematch, also rubbed many the wrong way when Wilder accused Fury of cheating and later fired his co-trainer, Mark Breland, for throwing in the towel amid unsubstantiated accusations from Wilder that Breland had drugged him.

Something major seemed to change in Wilder’s heart, however, in late May when he attended the unveiling of a bronze statue in his honor, designed by local artist Caleb O’Connor, outside the Visitor Center in Wilder’s hometown of Tuscaloosa, Alabama.

“I’m almost 37 years young and I’m receiving my flowers,” Wilder told “Morning Kombat” last week. “I’m not old and I’m not dead. Most of the time, that’s when people receive their flowers, when they are out. That’s when people want to perceive their greatness and say how good and how great they were. For me, all of my accomplishments have been set in stone within a statue and it feels so amazing to be so young and to [still] have my mental [capacities] and have my health still in place.”

Can’t get enough boxing and MMA? Get the latest in the world of combat sports from two of the best in the business. Subscribe to Morning Kombat with Luke Thomas and Brian Campbell for the best analysis and in-depth news, including an exclusive interview with Deontay Wilder below.

The timing of the honor turned out to be perfect for Wilder. Just seven months earlier, he had showcased an almost absurd level of heart and determination to get up off the canvas twice against Fury and score a pair of knockdowns of his own before the eventual 11th-round knockout defeat. The fight was not only in contention for best of 2021, it was among the division’s most brutal and dramatic fights ever contested.

“What made me want to continue [fighting] on is when I was presented that, and to see so many people all over the world, how they came and joined hand-in-hand to celebrate with me and my loved ones,” Wilder said. “To see certain women and men break down in front of their children and point at me as an example of greatness [and say,] ‘This is what a leader and a king looks like.’ It made me feel great.”

The experience led to Wilder surveying his options and deciding to return to boxing for what he says will be his final three years. That comeback starts on Saturday at the Barclays Center in Brooklyn, New York, when Wilder welcomes former sparring partner Robert Helenius (31-3, 20 KOs) in the main event of a PBC on Fox pay-per-view card (9 p.m. ET).

“One thing for sure in this country is we love a comeback story,” Wilder said. “I think when I showed so much heart and character [against Fury], and the willingness to win and not give up, it played out big time for me. What I displayed that night, it really woke a lot of people up. Unfortunately, I came up on the short end of the stick. But overall, I attained nothing but success. It’s a great feeling.

“I can’t stop now. This is not the end of it. I have to continue to keep going because of the motivation and the inspiration that I give to so many people. I really had to have a reality check because I didn’t know how many people I inspire until you see things with your own eyes. I’m just a normal guy and a normal human being.”

Wilder said he experienced firsthand the American sporting culture’s fascination not only with winners but how quickly “the people turn against a winner and want to see them lose.” But despite the fact that he still openly carries heavy cheating accusations against Fury, who provided the only blemishes on his pro career thanks to a disputed 2018 split draw and a pair of knockout defeats, Wilder appears to be in a good place both emotionally and spiritually following his first professional setbacks.

In fact, Wilder said he’s feeling so giving that he wanted to reward Helenius with a big opportunity.

“First off, Robert Helenius has been a long time sparring partner for me. I love the guy,” Wilder said. “Him and his trainer, they always bring the hospitality down to the south, as we give ours to them. He has always been a great guy to prepare me for any opponent that I may face. But, one thing about Robert that I love and can relate to him, is that he has a warrior heart. I don’t want people to think that because I love him and respect him that it’s not going to be a great fight. That’s not true. I am one of the only fighters who can turn it on and turn it off. Inside the ring, I transform into a beast.”

A native of Sweden who fights out of Finland, the 38-year-old Helenius has embarked upon a bit of a career renaissance in recent years. “The Nordic Nightmare” was once tabbed more than a decade ago as the future of the heavyweight division until injuries and embarrassing knockout defeats to Johann Duhaupas and Gerald Washington, two fighters Wilder previously decimated with ease, left him a fading bust.

To his credit, Helenius has rebounded nicely by twice stopping unbeaten Adam Kownacki in consecutive fights to place himself back into contention. At nearly 6-foot-7 with a 79-inch reach that is just four inches shy of Wilder, he’s also the rare heavyweight with the size and power to rival “The Bronze Bomber.”

The stakes for Wilder’s return also couldn’t be any higher. Should he get past Helenius, Wilder is focused on two major fights: unified heavyweight champion Oleksandr Usyk, who is fresh off a pair of wins over Anthony Joshua, and former champion Andy Ruiz Jr.

“I’m going straight for the titles,” Wilder said. “I hear that Oleksandr Usyk will be at the fight. I also hear that Robert Helenius, if he is victorious, is a mandatory for that belt. Usyk is talking about fighting the winner of this fight. I have heard great things about him being a standup guy. From the outside looking in, I like him as a person and value what he says. I hope he is a man of his word because I am going to hold him to it.

“You also have Andy Ruiz if the Usyk fight doesn’t happen. He is one of my stablemates [within Premier Boxing Champions], which will be a faster and easier fight to make. I want nothing but great fights because that’s what I am all about. I don’t believe in holding and stalling. I have only three years left and I want to provide my greatness for those last three years and then I’m out.”

Fueled by the love and respect he finally achieved in defeat by refusing to quit against Fury, Wilder believes by announcing his comeback that he has already won.

“The only way you fail is when you give up in life,” Wilder said.