Get the latest Syracuse news delivered right to your inbox.
Subscribe to our newsletter here.

At the gym, Emma Powers noticed that men tend to dominate the weight lifting areas leaving women to create their own, separate space.

“No, it’s not a coincidence … we just feel more comfortable together, so that’s where we go,” said Powers, a junior at the Falk College of Sport and Human Dynamics.

This fall, the Barnes Center at The Arch hit a notable milestone, welcoming its millionth visitor. But the gym culture at Syracuse University, while offering plenty of resources and opportunities for exercising, can still be hard to navigate for some students. With gender stereotypes and stigma also at play, this culture is particularly harmful towards female students.

Gym intimidation, especially for women, is no rarity. Many people resort to at-home workouts, private, one-on-one training, and even gyms exclusive to women to avoid the overwhelming nature of regular gyms, Harmon said.

While there are other gyms around campus, they don’t have as much equipment or resources as the Barnes Center, making the Arch an important, but less welcoming, gym on campus, said RoQue Harmon, the internship placement coordinator in the Department of Exercise Science.

These gender differences in gyms like Barnes have a long history, Harmon said.

“For many decades, even fitness facilities were separated,” Harmon said. “That’s in part because of incorrect science being taught that women shouldn’t lift weights because they’ll get bulky like men, which we know is incorrect.”

Harmon said that these remnants of a more segregated era still reverberate in fitness facilities today, including the Barnes Center.

A 2019 survey from OnePoll, sponsored by Isopure, found that out of 2,000 Americans, 50% are intimidated at the thought of working out at a gym. Furthermore, 17% said they grow intimidated when exercising in front of someone of the opposite sex.

Despite these trends, Harmon said that there has been a lot of progress made in creating gyms that are accessible to everyone.

“Even in my short lifespan of professional experience and fitness, it’s gotten a lot more inclusive to all genders and all ability levels,” Harmon said.

Dr. Kylie Harmon, an assistant professor in the Department of Exercise Science, believes that the fitness world is becoming more welcoming, largely due to advancements in technology — including social media. 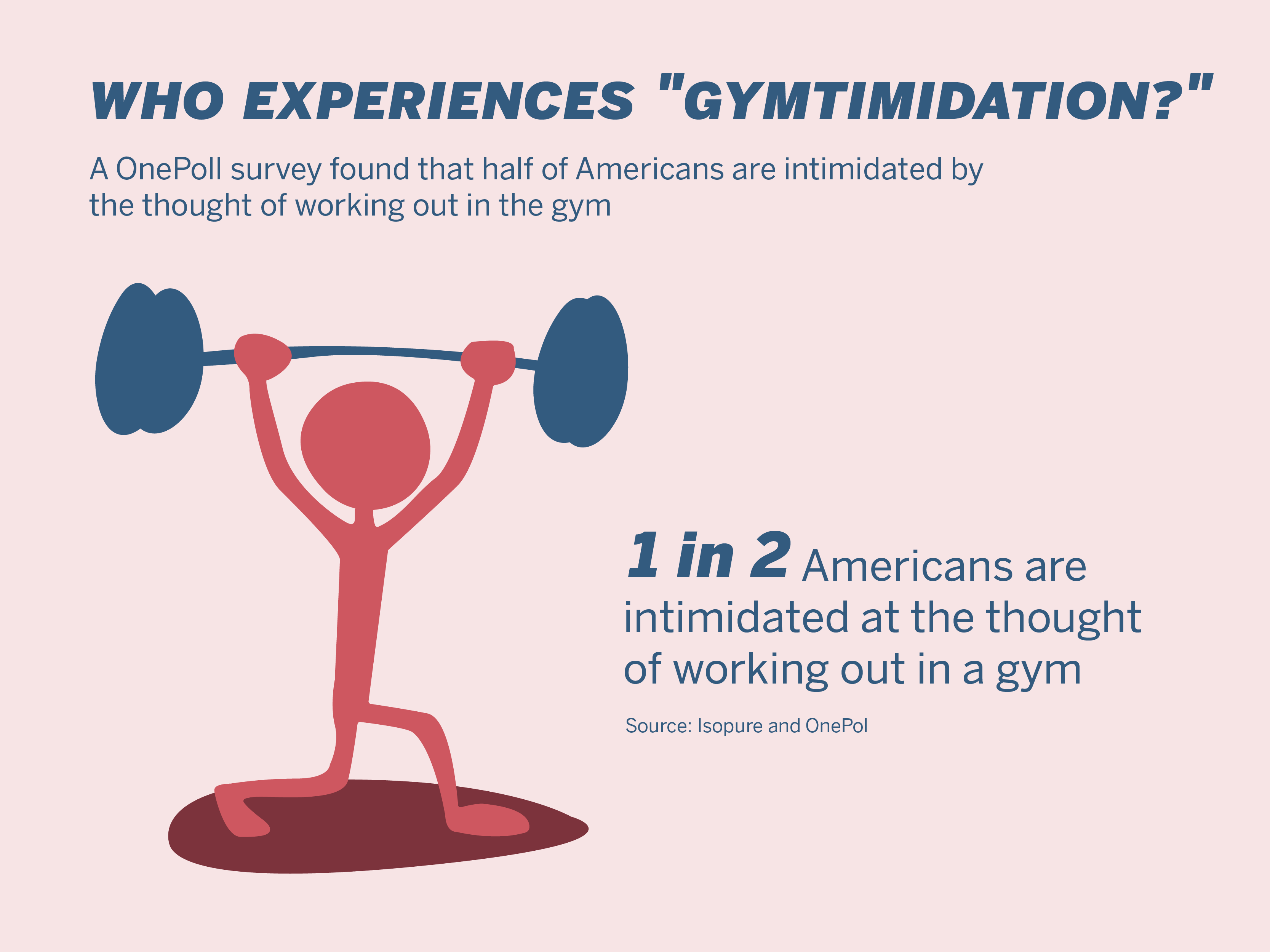 Many people in the fitness industry use social media to display their workouts and the progress that they have made in the gym. While this can set unrealistic expectations for people, social media has also helped with motivating and inspiring people to start working out.

“Even though social media can be good and bad … I think it’s done wonders for exposing more people to different types of fitness,” Dr. Harmon said.

A 2022 study by Digital Health found that fitness influencers on social media have a significant impact on their audience’s motivation to exercise. Out of the 507 survey participants, the overwhelming majority felt that the perceived trustworthiness, expertise and attractiveness of the social media influencers positively correlated with their level of motivation to exercise.

Despite the discomfort expressed by women who go to the gym, Dr. Harmon believes that this uneasiness is sometimes an inevitable aspect of the gym experience, especially when people want to prioritize both their physical and mental health.

“I don’t know if there’s any large tenet that we can implement … sometimes we have to do things that are uncomfortable for our own good, as long as it’s a safe space,” Dr. Harmon said.

A 2017 review published by Maturitas revealed the numerous immunological and psychological benefits of physical exercise. Most pertinently, the paper stated that regular exercise can greatly improve the mental health of people suffering from anxiety, depression and trauma-related disorders.

While this gendered discomfort needs to be addressed more, Harmon said, the gym represents a place for personal growth, no matter one’s identity.

“That’s what’s nice, when I think about being in an institution of higher education,” Harmon said. “We’re all here coming in knowing that we have a lot to learn.”