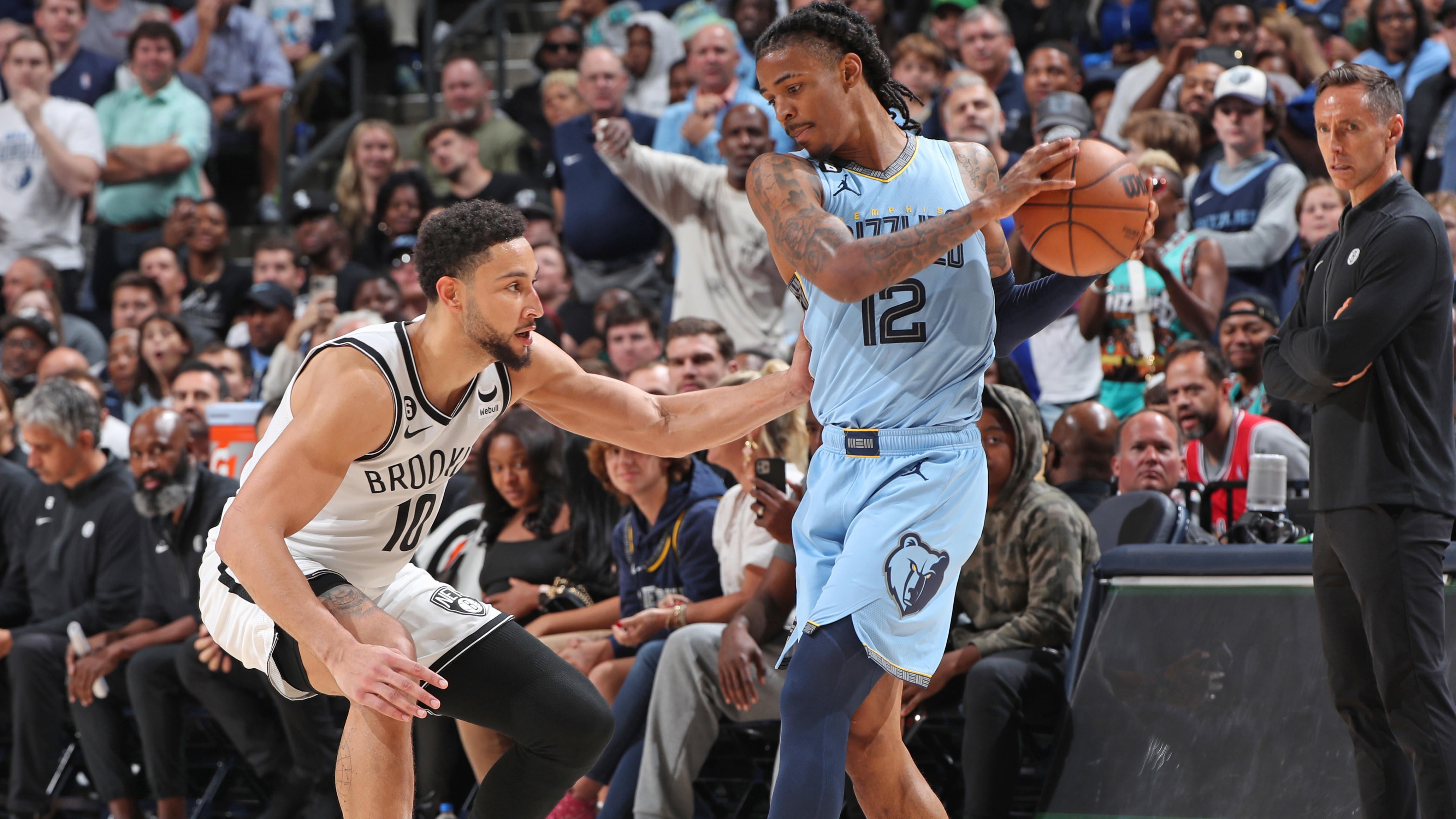 The Memphis Grizzlies suffered an embarrassing 41-point loss to the Dallas Mavericks over the weekend and were determined to get back on track on Monday night. They did just that with an impressive 134-124 victory over the visiting Brooklyn Nets in one of the more entertaining games of the first week.

Ja Morant and Desmond Bane led the way with 38 points apiece — the latter setting a new career-high — as they outdueled Kevin Durant and Kyrie Irving, who each tallied 37 points. Morant was at his high-flying best, throwing down an incredible lefty alley-oop, while Bane closed the show by scoring 10 consecutive points late in the fourth to single-handedly hold off the Nets’ late comeback attempt.

The scoring ability on display by all four of those players was remarkable; they each scored at least 37 points on 50 percent from the field and combined for 150 of the 258 points scored in the game. That they did so largely on jumpers only makes the feat that much more incredible. We may not see a scoring duel like this for the rest of the season.

One player who did not get in on the offensive act was Ben Simmons. In yet another disappointing showing, he managed just seven points, three rebounds, and eight assists on 2 of 5 from the field. Worse yet, he fouled out for the second time in three games, and for the season, he now has 17 points and 14 fouls.

In fact, one of the most entertaining plays Simmons was involved in all night was when Morant baited him into picking up his sixth foul late in the fourth quarter. After Kyrie Irving scored to cut the deficit to six, Morant let the ball roll up the floor without touching it so that the game clock would continue to run while the shot clock remained at 24. Simmons then pressed up to force Morant to pick up the ball, and the Grizzlies guard immediately drew a foul to send Simmons to the bench.

After the game, Morant explained that he was prepared for that situation because of a play during his rookie season:

“My rookie year it was in Philly, the same situation happened like that vs. Ben [Simmons]. In the first half I went to look at coach to get the ball and he ran through the ball, got the steal and went and dunked. I knew it at that moment, I was rolling the ball and I looked at coach and I see [Simmons] try to look like, ‘oh yeah.’ So I knew I had him. He was gonna press up and I was gonna force the ref to make the call.”

That’s a fascinating anecdote and explanation from Morant and shows how experience pays off, even in the smallest ways. For those interested, here’s the play Morant was referencing from years ago.

“You tell me, you saw it. I don’t want to get fined,” Simmons said. “I just saw the play online. It wasn’t a foul. He called it a foul, made a mistake, it is what it is. Really frustrating, but all I can do is support my team from the bench. It’s frustrating ’cause it’s late game, fourth quarter, physical close game. It’s the NBA. It’s not college, not high school. People are gonna get hit, some people are gonna bleed, it’s basketball.”

As crafty as Morant’s play was, the broader talking point is about Simmons. That moment summed up a frustrating and disappointing start to Simmons’ Nets tenure.

He has not found his place alongside Durant and Irving on the offense and has not made his expected impact on the defensive end either. You cannot read too much into on-off stats after just three games, but Simmons’ minus-40.3 net rating differential is still staggering. The eye test doesn’t do much to dispute those numbers either.

Simmons missed all of last season and is also coming back from back surgery, so being a bit off the pace is one thing. Struggling to this extent, however, is not only surprising but concerning for the Nets moving forward. There’s still plenty of time, but unless Simmons starts showing signs of improvement soon, the noise in Brooklyn surrounding his play is only going to get louder.