Devolves Into a Total Disaster 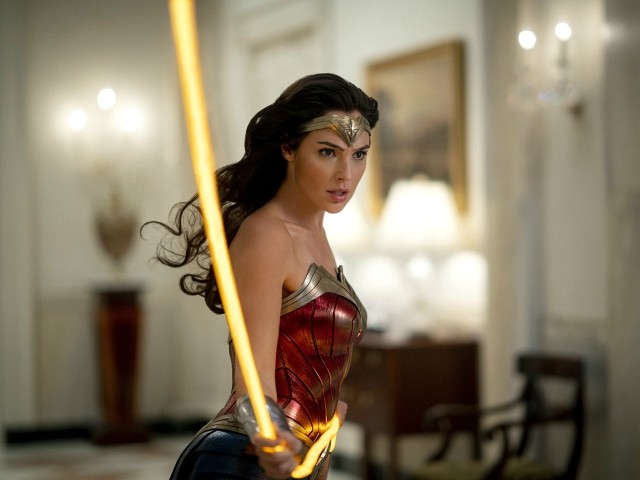 The first hour of director, co-writer Patty Jenkins’ Wonder Woman 1984 is actually pretty good. Then it jumps off a cliff with an ACME screenplay that won’t open and goes kersplat.

Man alive, what a disaster.

Things open winningly enough with a flashback to Diana Prince aka Wonder Woman (Gal Gadot) as a child competing against adult Amazons in a kind-of Olympic event that involves archery, horseback riding, an obstacle course, and a Very Important Lesson about truth. Then we flash-forward to the year 1984 where, by day, Adult Diana works as an anthropologist for the Smithsonian and, by night, she mourns the loss of Steve Trevor (Chris Pine), the only man she ever loved.

Along the way, she meets and befriends a new colleague, Barbara Minerva (Kristen Wiig), a klutzy wallflower who desperately needs a friend. If you remember Michelle Pfeiffer’s Selina Kyle in Batman Returns (1992), prepare yourself for a pale imitation.

Although I enjoyed the first hour, you’re still asked to suspend an awful lot of disbelief, starting with the fact that a tall, gorgeous brunette with legs up-to-here is able run around Washington DC in broad daylight doing superhero stuff (saving lives, thwarting criminals in crowded shopping malls) and no one knows a thing about her. Apparently, no one’s ever snapped a photo … in Washington DC … in 1984.

Then we’re asked to believe that some junky-looking piece of crystal can grant everyone a single wish, any wish at all, no matter how preposterous, and this crystal just happens to end up at the Smithsonian where Wonder Woman works.

Then we’re asked to believe Kirsten Wiig can be sexy and menacing.

Surprisingly, the coming problems have almost nothing to do with the movie’s sporadically obnoxious politics. Yes, men are all dicks and cat-callers. Yes, Pedro Pascal’s Maxwell Lord is an obvious spoof of President Trump (but a surprisingly sympathetic one). Yes, someone wishes for a — wait for it, wait for it — border wall. But it’s all so over-the-top, it comes off as more tongue-in-cheek than obnoxious.

Unfortunately, the movie’s Big Problem is much more serious than Woketardery. The problem is that Jenkins has no idea how to execute her concept of the Wish Crystal in a way that makes any sense or sticks to its own rules.

After Maxwell Lord gets his greedy hands on the crystal, his wish is that he becomes the crystal. Oddly enough, even with the Monkey’s Paw price attached to every wish, he doesn’t turn into a crystal. Instead, he receives two separate superpowers: 1) he is now the granter of wishes and 2) he gets to choose the curse that comes with your wish.

For example, if you wish for a border wall, Lord will say, Granted, and now I’m taking all your oil. Then this massive wall appears out of nowhere and you have no oil, just a lot of angry people who don’t like the wall; which turns into a geopolitical crisis where everyone wants to shoot off nukes — and it’s all so contrived and desperate, you start to feel embarrassed for the movie.

Lord can also fast talk you into using your wish to benefit him. Something like, Don’t you wish all my oil wells would strike oil?

On a smaller scale, that might be a pretty nifty idea. But Wonder Woman has to Save The World, so for reasons that make no sense, Lord’s little wish-trick starts causing chaos all over the planet (including cows) and you have no idea why. After he returns from Cairo, all hell is breaking loose in DC. It just makes no sense because it’s a big, desperate contrivance.

If you want a mind-stopping example of desperate and contrived…

As the world’s unspooling to the brink of nuclear war, Lord practically breaks into the Oval Office to meet with the president (is this Reagan? He doesn’t sound like Reagan. There are jellybeans). Nevertheless, the Secret Service does nothing, even when a sweaty and desperate Lord grabs the president’s hands and tells him to make a wish. Okay, get this…

Who would wish for anything other than total victory? Even Hitler wouldn’t wish for something so ridiculous.

The problem is that Jenkins wants to increase the stakes (more nukes!), but is too lazy to craft a way that might sense. This is when what little air was left leaked all the way out of the movie. If Jenkins doesn’t care, why should we? The story never recovers. It gets dumber.

Something else that makes no sense is that after Wonder Woman wishes for Steve Trevor to return from the dead, we’re told she’s losing her powers. Except she doesn’t lose her powers. She actually summons new powers, like the power to make an airplane invisible. Sure, at times, she’s a little weaker. She bleeds. But she also gets in a huge fight with 30 guys firing .50 caliber machine guns from six speeding trucks and wins. Does that make any sense to you?

For some reason Lord’s eye turns red and his skin goes bad. Apparently, all this greed is making him sick. About a half hour later, he catches up to everyone in the audience who’s wondering why he doesn’t just wish for perfect health.

Anyway, things really go to pot in the last half hour when Kirsten Wiig shows up in a ridiculous Cheetah outfit. Did Jenkins learn nothing from this? Then Maxwell Lord storms into a TV studio and starts ranting about how we should all want more, or something. Then he steps into the middle of this weird light (that shows up for no reason) and rants some more. There’s a wind machine, too.

Oh, and one big rule of the crystal is that you must be touching it to have your wish granted. This rule is tossed completely out the window because look at all that cool CGI.

Wonder Woman 1984 is 40 minutes too long, has more plot holes than Joe Biden has hair plugs, and made my butt go numb in the last hour because that’s what happens when the filmmakers coast on razzle dazzle.

I still have no idea what the stakes were and was frequently surprised at how bargain-bin things looked. This is a $200 million movie with a Christmas holiday scene that would look cheap in a Hallmark movie.

I did enjoy laying my male gaze on Gal Gadot. I surely did. And if I ever get my hands on that crystal,  I know what I’m wishing for: some cleavage in Wonder Woman 3.

How To Get A Man To Pay All Your Bills

New List Of 9 Bollywood Actresses who Got Pregnant Before Marriage

Arlo the Alligator Boy review: A movie musical sets the stage for a Netflix show

Arlo the Alligator Boy review: A movie musical sets the…

The Skylia Prophecy Is Now Available For Digital…

Arlo the Alligator Boy review: A movie musical sets the…

The Skylia Prophecy Is Now Available For Digital Pre-order…

Dead Dust Is Now Available For Digital Pre-order And…