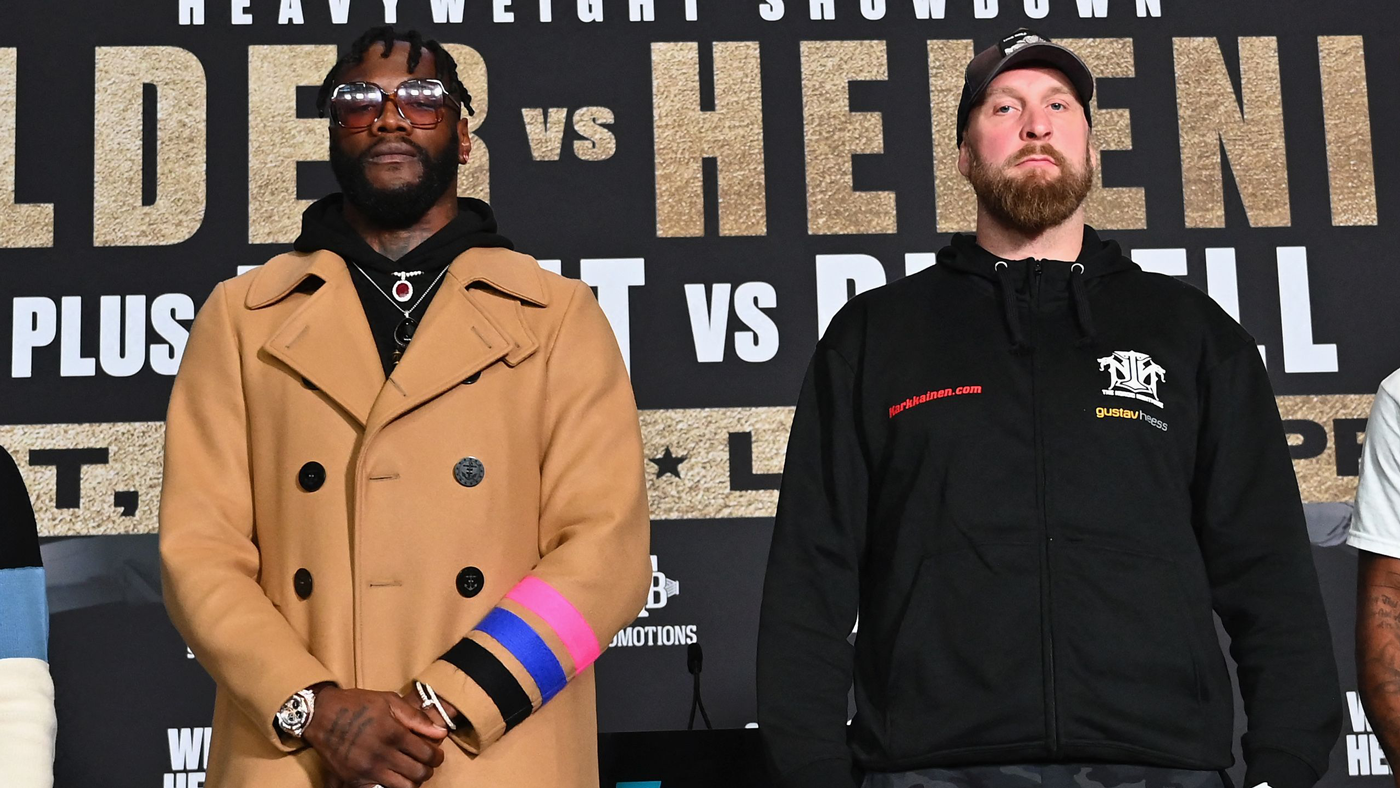 It has been over 1,000 days since Deontay Wilder stepped into a boxing ring to face an opponent other than Tyson Fury. On Saturday, the former WBC heavyweight champion looks to move past the Fury saga when he faces Robert Helenius at Barclays Center in Brooklyn (9 p.m. ET, FOX PPV).

Wilder’s career has been tangled with Fury’s dating back to their first meeting in December 2018, a clash that ended in a controversial split draw. After Fury stopped Wilder (42-2-1, 41 KO) twice to settle their rivalry, it left Wilder out of the world title picture for the first time since he won the WBC belt in 2015.

One of the hardest punchers in boxing history, Wilder will be looking to get back to his old ways when he faces off with Helenius (31-3, 20 KO). Only one Wilder opponent other than Fury has been able to last to the judges’ scorecards and four of Wilder’s 41 career knockout victories have come inside Barclays Center.

“I’ve had some of my most dramatic and exciting knockouts and most enjoyable moments in this arena,” Wilder said at Thursday’s pre-fight press conference. “When I got off the plane, the energy here just felt amazing. … It almost feels like a second home to me. I’m always here and put on my best performances here. I’m not looking for nothing less than a great performance. The fans are in for a treat. There’s a lot on the line, and I think I’ve got the right opponent for us to give the fans what we want to see.”

Can’t get enough boxing and MMA? Get the latest in the world of combat sports from two of the best in the business. Subscribe to Morning Kombat with Luke Thomas and Brian Campbell for the best analysis and in-depth news, including an early look at a busy weekend in boxing below.

Helenius is a former Wilder sparring partner and the two men share a healthy respect that at times seems to border on something as close to friendship as two opponents come.

“I’ve got tremendous love and respect for Robert,” Wilder said. “We’ve known each other for years, and he’s come to my camps (in the past). They say iron sharpens iron, and we’ve definitely done that. The reason I agreed to this fight is he’s been on a winning streak. He’s been looking great. And this is for a WBC eliminator. If I’m gonna come back, why not fight the best, and fight for something that’s worth fighting for?”

Many had written Helenius off as a top-end heavyweight following a 2019 knockout loss to Gerald Washington in a fight that Helenius entered as a clear favorite. Helenius then found himself in position to play the B-side against a rising star in Adam Kownacki.

Entering his March 2020 bout with Kownacki, Helenius was a +2000 underdog in a fight that was supposed to land Kownacki a shot at a world title. Helenius defied the odds that night, battering Kownacki before scoring a fourth-round stoppage that breathed new life into a once-promising career that had been derailed by injuries and some disappointing performances.

Helenius proved the massive upset was no fluke when he rematched Kownacki in October 2021, again entering the ring as an underdog and again scoring a TKO victory, this time in the sixth round.

A win over Wilder would be the biggest of Helenius’ career, without a doubt. As the fight is a WBC eliminator, it would also potentially set him up for his first world title shot in a career that began with so much promise all the way back in 2008.

The undercard also features a much-anticipated battle between rivals at super middleweight in Caleb Plant and Anthony Dirrell. Plant has not fought since losing his IBF title in a bid to become undisputed against Canelo Alvarez in November 2021. Dirrell, meanwhile, has found a mixed bag of results in his most recent outings. He fought Kyrone Davis to a draw in February 2021 before scoring a fourth-round knockout of Marcos Hernandez in November. Prior to that, Dirrell lost his WBC title at 168 pounds to David Benavidez in September 2019.

“I’m just looking to make a statement and put on a big show,” Plant said at an open workout this week. “I’m coming off the big fight against Canelo Alvarez, and I’ve just been training hard. Ever since that fight, my team has been in the dungeon and we can’t wait for the bell to ring, so we can show the world what we’re working on.”

Plus, rising heavyweight contender Frank Sanchez is back in action this week when he takes on Carlos Negron. Sanchez, the 30-year-old from Cuba, is undefeated at 20-0, 1 NC with 13 of those wins coming by knockout. Negron represents a decent step up in competition as the Puerto Rican has won three in a row, including two by knockout. And Gary Antonio Russell is in action to open the PPV festivities when he takes on Emmanuel Rodriguez at bantamweight.

Let’s take a closer look at the rest of the fight card with the latest odds from Caesars Sportsbook before making a prediction on the main event.

Helenius picking up the two wins over Kownacki has made for a great story. He truly was viewed as someone who would be a player in the heavyweight division before setback after setback left the boxing world to write him off. But Kownacki was someone whose fan-friendly style was always going to get exploited by the right fighter. Helenius was that guy, someone with the reach and patience to find enough clean shots to put Kownacki away before the constant wave of punches and pressure could overwhelm as it always had for Kownacki.

Wilder may be a massive puncher, but he isn’t a particularly reckless fighter. At times, Wilder is actually too hesitant to let go, looking for the perfect shot. That works well because a perfect Wilder shot knocks out nearly any man walking the planet. But in a fight like his rematch with Luis Ortiz, Wilder can punt away rounds through inactivity looking for that one punch. Against Ortiz, that punch came, as it almost always has.

Helenius will put in work if Wilder isn’t active. He’s an aggressive, tall and strong fighter. But he’s also been knocked out by Gerald Washington and Johann Duhaupas, two men who don’t have as many knockouts combined as Wilder has in his career. It doesn’t matter how many early rounds Helenius can tuck away because Wilder’s right hand is going to land eventually and Helenius can’t stand up to it when it does. Pick: Deontay Wilder via KO4