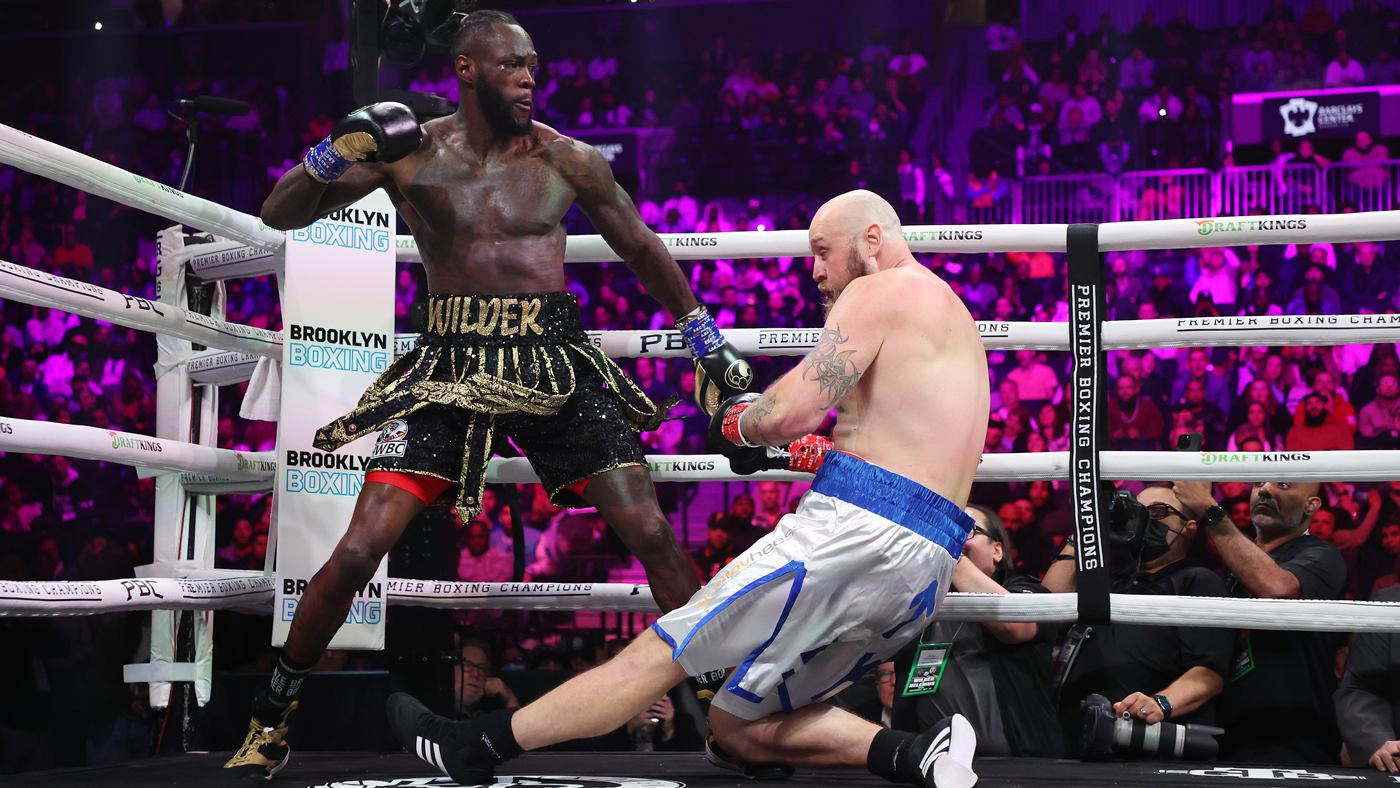 Wilder (43-2-1, 42 KOs) needed just one round — and one thunderous counter right hand — to finish former sparring partner Robert Helenius without the need for a count from referee Michael Griffin. The heavyweight clash inside the Barclays Center in Brooklyn, New York, was the main event of a PBC on Fox pay-per-view card.

The first-round knockout was the 21st of Wilder’s career. He also improved to 5-0 inside the Barclays Center, the same building where he also finished 6-foot-7 Dominic Breazeale in less than one round in 2019.

“It’s just amazing to be back in Brooklyn. This arena is like a second home to me,” Wilder said. “It just feels so good to be back. When I came off the plane and set my foot on the ground, I just felt that great energy. I felt the love and the support and that’s just what I needed.”

After contemplating retirement for months, the 36-year-old Wilder decided to continue his career in May when a statue in his honor was erected outside the Visitor Center in his native Tuscaloosa, Alabama.

The former WBC champion, whose 10 title defenses are good for fifth best in division history was technically outlanded by Helenius by a margin of 5 to 3, according to CompuBox. But as Wilder has often said throughout his career, his opponents need to be perfect for 12 rounds but he only needs to be perfect for one second.

Helenius (31-4, 20 KOs), whose 6-foot-7 height and big power was expected to challenge the heavy betting favorite in Wilder, backed his opponent up into the corner but ate a flush right counter shot as he stepped forward to punch. Griffin called off the bout with less than five seconds remaining in the opening round.

“I was making him reach. I was trying to keep my distance because Robert has the heart of a champion,” Wilder said. “I knew what he was capable of. I didn’t take him lightly or for granted at all. I saw the look in his eye. I knew he would come with his A-plus game so I had to circle around the ring. I wanted to be mobile and hostile tonight. I set him up and it was a great fight.”

Wilder weighed in for the fight at 214.5 pounds, which was nearly 24 pounds less than he weighed in his trilogy loss to Fury last October, when Wilder bulked up to try and deal with Fury’s 6-foot-9 frame. “The Bronze Bomber” looked fit and motivated against Helenius and gave credit to trainer, and former opponent, Malik Scott after the fight.

“[Scott] has been a big inspiration to me and a big motivation to me,” Wilder said. “This is my brother and I love him so much. This was a good camp and we wanted to make this fun again. We put in over 730 rounds and it paid off tonight, big time.”

Helenius, 38, saw his renaissance win streak end at three fights. The native of Sweden, who fights out of Norway, had revived his career with a pair of knockouts in recent years over Adam Kownacki.

Now that he’s back as a major player in the division, Wilder set his focus on two names moving forward: unified champion Oleksandr Usyk, who is fresh off a pair of wins over Anthony Joshua, and Andy Ruiz Jr., a fellow PBC fighter who once upset Joshua for a trio of titles in 2019.

“I have been hearing the rumors about Usyk. I don’t see him? Where is he?” Wilder said. “Sometimes guys want to fight me and then they see my power and they go in the other direction. Whether it’s Andy Ruiz or Usyk, bring it on. The excitement is back in the heavyweight division and there is no excitement without Deontay Wilder. That’s facts.”

Irene Cara, Oscar-winning singer and actress known for “Fame” and “Flashdance,” dies at 63

Top 10 Insights You Can Find By Analyzing Your Market