Las Vegas, Jan 6 (Reuters) – Farm equipment took the keynote spotlight at the CES technology trade show in Las Vegas, as “human security for all” became the first theme in its 56-year history.

In his speech opening the Consumer Electronics Show on Thursday, John Deere Chief Executive John May laid out a strategy of using technology to feed a hungry world as arable land and rural labor decline while costs are rising.

“Technology allows farmers to create more with less,” May told an audience of 2,000 at one of the world’s largest tech events, organized by the Consumer Technology Association (CTA).

The trade group is partnering with the World Academy of Art and Science and the United Nations Trust Fund for Human Security to encourage the tech industry to help tackle the world’s most pressing problems.

“This is the next big idea,” said Walt Stinson, co-founder of electronics retailer ListenUp, who approached the CTA about a potential partnership.

“If you add to the purpose of every tech company, all of a sudden you have a moral purpose, you have something that could be hugely profitable,” Patel said, “because your technology reaches a customer base that (previously) was not profitable.”

The CES sessions are the first phase of the trade group’s “rolling thunder” campaign to raise awareness across all sectors of the economy, said Garry Jacobs, executive chairman of the Human Security For All campaign. The group plans to make its pitch to the world’s universities in the coming months.

“These challenges cannot be handled by nation states or multilateral institutions,” said Jacobs. “It requires the cooperation of global society in its different segments.” 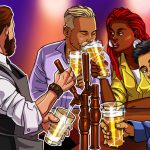