BRATTLEBORO — Inside his studio overlooking Main Street, Bobby DiTrani has a small box fan pointed at him as he works on his newest painting. DiTrani is a classical realist painter, and some of this mytholgcal painting feels like a piece of art that draws from some of the master artists of the Renaissance.

Ever since DiTrani was young, he was always drawing. In his teen years, he started to move into painting.

“You can only bring things so far from the drawing. There’s like other dimensions that you can get to in painting. I just got really into it, and really into like, specific artists and art history,” said DiTrani. 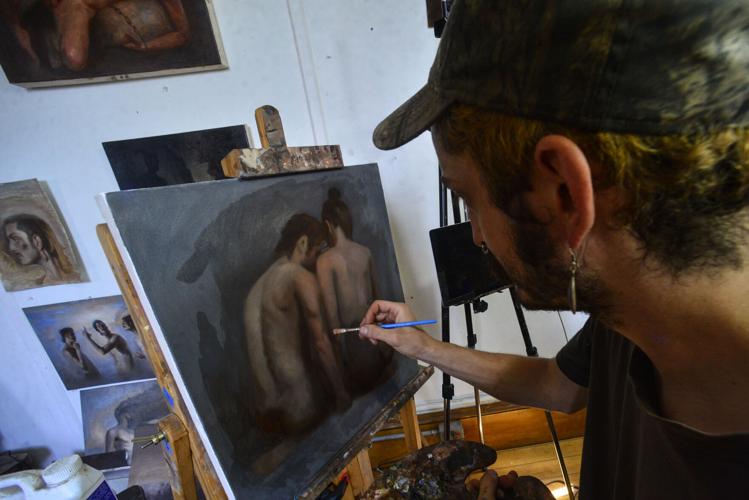 Bobby Ditrani, a classical realist painter, works on a new painting inside his studio that overlooks Main Street, Brattleboro, Vt., on Tuesday, July 12, 2022.

Bobby Ditrani, a classical realist painter, works on a new painting inside his studio that overlooks Main Street, Brattleboro, Vt., on Tuesday, July 12, 2022.

After high school, DiTrani went to community college before transferring to an art school to learn classical realism.

Drawing inspiration from 1600s artist like Jusepe de Ribera to more modern in the same form, as Odd Nerdrum, DiTrani likes to include mythological imagery into his work, directly like Prometheus, or just used as a form of inspiration.

“I kind of like that I have no control over what somebody’s perception is [about his work]. I really do believe that sometimes people see things that I had no intention of putting in there and it’s very interesting to like,” said DiTrani. “There was a painting that I had at Gallery in the Woods that I sold. The guy was telling me about how he was drawn to it because of a dream that he had … There’s no way I could imagine that.”

His work can be viewed at Gallery in the Woods.

DiTrani, of Brattleboro, is also known for his musical talents as a member of DiTrani Brothers, started with his brother Walker several years ago. They started writing music together and slowly added more people to their group.

How much does missing student loan payments hurt your credit score?