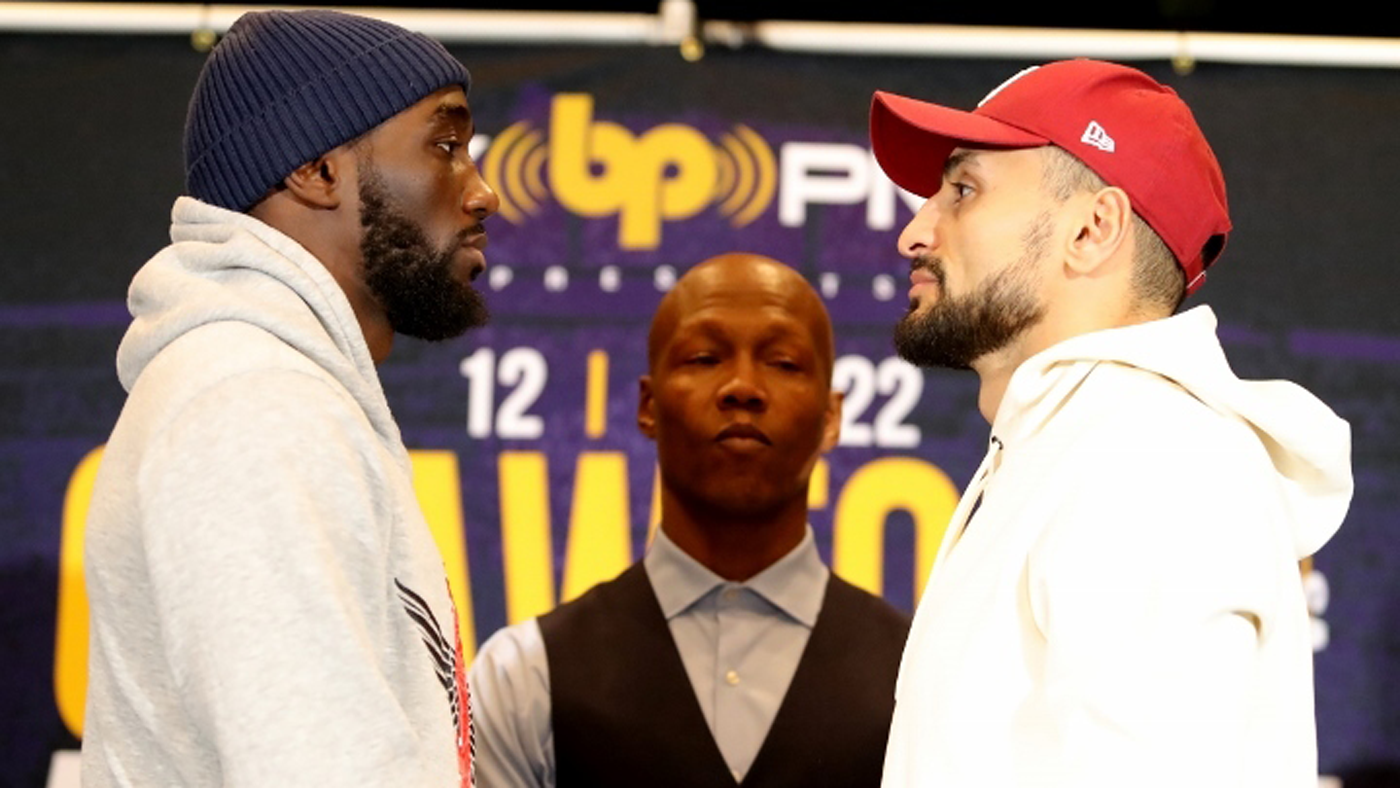 A truly dedicated boxing fan can expect to spend all day on Saturday in front of their TV. With the day’s first fights starting at 8:30 a.m. ET and likely running until midnight, plenty of punches will fly.

Michael Conlan and Karim Guerfi meet in a featherweight clash in the first headliner of the day, both men looking to continue to rebound from disastrous losses earlier in the year. The focus will then shift to an IBF featherweight title fight as champion Josh Warrington defends against Luis Alberto Lopez.

The evening main events include Teofimo Lopez looking to continue his push toward a 140-pound title shot when he faces Sandor Martin and Terence Crawford defending his WBO welterweight title against European champion David Avanesyan.

Let’s take a look at — and predict the results of — all the big fights set for Saturday along with odds from Caesars Sportsbook.

Michael Conlan -2200 vs. Karim Guerfi +1100, featherweight — 1:15 p.m. ET, ESPN+: After starting his career 16-0, Conlan found himself in the ring with Leigh Wood this past March. The bout between Conlan and Wood was highly-entertaining, but Conlan was in total control, landing thudding shots throughout and even dropping Wood in the first round. Then, in the 11th round, everything changed. Wood landed a left hand that dropped Conlan late and then knocked Conlan out cold and through the ropes in the 12th. It was a stunning comeback for Wood and a scary loss for Conlan that took away his unbeaten record.

Amazingly, Guerfi may have topped Conlan in stunning, out-of-nowhere knockout losses in 2022. In February, Guerfi was positively thrashing Jordan Gill. It seemed that the doctor, referee or Gill’s corner would need to step in to save him. In the ninth round, seemingly on his way to a TKO defeat, Gill unloaded a bomb of a right hand that sent Guerfi crashing to the canvas for an immediate stoppage.

Both Conlan and Guerfi rebounded from their losses with easy decision wins over the summer and now need to pick up a win to remain relevant at the top end of the division. Conlan will enter as a massive favorite based on his skillset. Guerfi is a fine fighter who operates a level below what Conlan is capable of and has been stopped four times in his career. Pick: Conlan via TKO5

Josh Warrington (c) -130 vs. Luis Alberto Lopez +110, IBF featherweight title — 4 p.m. ET, DAZN: The prelims for this card kick off at 8:30 a.m., so you don’t need to bother with anything but boxing from the morning hours. This is the best fight of the weekend on paper. Warrington is a solid world title-level fighter, but one who is always vulnerable to dropping a fight or just squeaking by with a win. In his most recent outing, Warrington beat Kiko Martinez to recapture the IBF title that he’d held from 2018 until vacating the belt in 2021. That fight showed a nasty streak from Warrington, who liberally used his head and shoulder to rough up Martinez en route to a seventh round stoppage.

Lopez is a solid contender who can provide any fighter in the division with trouble. While he tends to get hit often, he is awkward, slick and heavy-handed enough to throw off opponents. Warrington will be at home in front of the amazing fans in Leeds, England and that may give him the edge, but he will have to be very careful from the jump with a tricky contender in front of him. Expect a tight contest with scorecards that could be edged toward the hometown boy. Pick: Warrington via SD

Teofimo Lopez -700 vs. Sandor Martin +500, light welterweight — 9 p.m. ET, ESPN: Lopez is still trying to build toward a championship opportunity after being upset by George Kambosos Jr. and losing his status as undisputed lightweight champion. A move to 140 pounds followed the loss, with Lopez cruising to a somewhat uninspiring TKO win over Pedro Campa in August. Lopez remains trained by his father and he still exudes tremendous confidence despite what should have been a humbling loss to Kambosos.

Martin stepped into the fight in mid-November after Jose Pedraza withdrew due to illness. Martin is a big upgrade in quality of opponent for Lopez, and one the WBC had ordered Lopez to face after Pedraza anyway. Martin has only fought in the U.S. once, upsetting Mikey Garcia in October 2021 and sending Garcia into retirement.

Lopez is not a blown-up fighter at 140 pounds like Garcia was when Martin defeated him. Martin is a solid European-level competitor but Lopez, when at his best, is one of the sport’s most dangerous and talented fighters. Lopez claims this is his division and a win over Martin sets him up to continue calling for fights with the top fighters in a loaded division. Pick: Lopez via TKO8

Terence Crawford (c) -1400 vs. David Avanesyan +800, WBO welterweight title — 9 p.m. ET, PPV: The story of this fight was always going to be that it’s not the fight anyone wanted. No disrespect to Avanesyan, who is a solid and talented fighter, but for months, fans were assured Crawford and Errol Spence Jr. were finalizing a deal to make one of the most anticipated fights of the modern era. Then Crawford pulled out due to issues with the negotiation and it was announced he would face Avanesyan.

Crawford is, without a doubt, one of the sport’s best fighters. He is also a fighter who has never really faced a level of competition worthy of his skills. In Avanesyan, he faces a man who has won six straight fights, all for the European welterweight title. Avanesyan has been sitting at a lower-tier of opponents since a 2016 to 2018 stretch that saw him fight Shane Mosley, Lamont Peterson and Egidijus Kavaliauskas.

Crawford finally landed a big-name fight in 2021 when he took out Shawn Porter. Now, he looks to tread water until hopefully bigger fights can materialize in 2023. At least he’s making what he claims to be a career-high purse for the fight. Pick: Crawford via TKO5