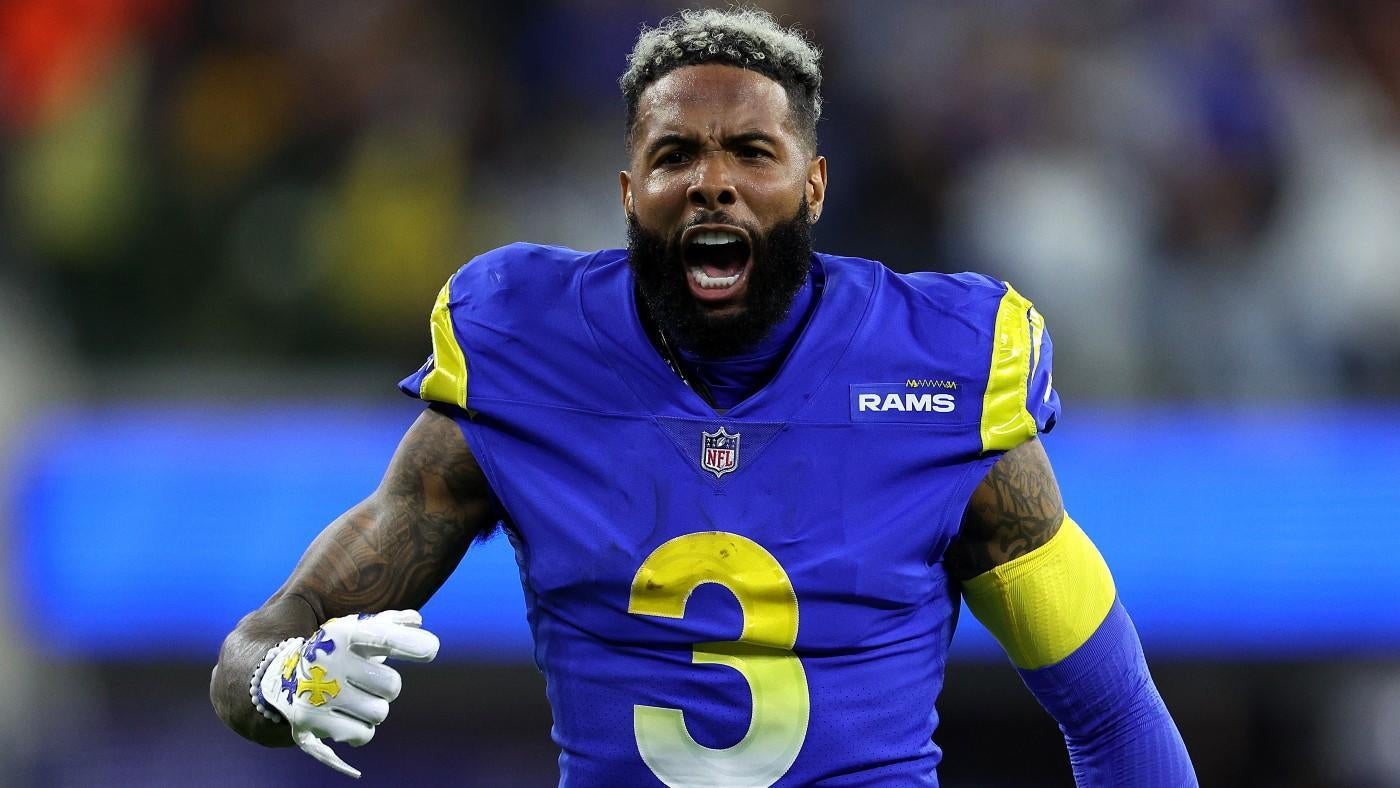 Wide receiver Odell Beckham Jr. is expected to make his return to the football field in the coming weeks. NFL insider Jay Glazer revealed on Fox Sunday before Week 10’s games that Beckham has been medically cleared from tearing the ACL in his left knee for a second time during Super Bowl LVI last February.

According to ESPN’s Adam Schefter, the Bills, Chiefs, Cowboys, 49ers and Giants are Beckham’s list of potential teams. Nelson Stewart, Beckham’s high school coach who remains close to him, told the New York Post on Monday that he thought it was a coin flip between the Cowboys and Giants.

Beckham intends on signing with a team by the end of November. There would be six weeks left in the regular season if Beckham signed at the end of the month.

It is believed that Beckham is looking for a long-term deal, which makes sense considering he just turned 30 and is coming off his second major knee surgery. Schefter mentioned the three-year contracts averaging $20 million per year that wide receivers Chris Godwin and Mike Williams signed, respectively, with the Buccaneers and Chargers in March as salary benchmarks for Beckham. Both of these deals essentially had $40 million fully guaranteed at signing.

There is somewhat of a parallel with Godwin because he got his contract despite tearing his right ACL and MCL late last season. The injury didn’t deter the Buccaneers from designating Godwin, who is 26, as a franchise player for a second straight year last March before he signed his deal.

Beckham probably would have re-signed with the Rams if he had gotten through the Super Bowl unscathed, but approaching Godwin and Williams territory would have been a stretch. His contract likely would have been comparable to the one Allen Robinson received early in free agency from the Rams. Robinson signed a three-year, $46.5 million contract (worth up to $48 million through incentives) with $30.75 million fully guaranteed following a subpar 2021 season. The third year in 2024 can be voided by Robinson reaching 2,201 combined receiving yards in 2022 and 2023. The Rams were probably sensitive about keeping Robinson under the $15.75 million per deal Cooper Kupp, 2021’s NFL Offensive Player of the Year, was still under at the time.

NFL Media’s Ian Rapoport reported about a month ago that Beckham had been seeking a Michael Gallup type offer from the Rams. Gallup, who is 26, tore his left ACL during Week 17 last season. He remained with the Cowboys on a five-year, $57.5 million contract averaging $11.5 million per year in March. The deal is worth as much as $62.5 million through salary escalators. There are $27 million in guarantees where $23 million was fully guaranteed.

Gallup had 35 catches for 445 yards with two touchdowns in nine games last season. He missed most of the first half of the 2021 season with a calf injury. The Gallup range as a base value could be in order for Beckham given his circumstances. The only team on Beckham’s list where he would be the primary receiving option in the passing game is the Giants.

Robinson is near the top of the market for clear-cut No. 2 wide receivers. Godwin and Williams were more co-No.1 receivers on their respective teams in 2021. Godwin had more targets on the Buccaneers than Mike Evans despite missing the final three regular season games because of his knee injury. He also led the Buccaneers in receptions and receiving yards in 2021. Williams’ 129 targets were tied for 16th in the NFL last season, and he led the Chargers in receiving yards.

Statistical incentives and/or salary escalators allowing Beckham to get to the Robinson’s salary level would be reasonable. That would mean approximately $4 million per year in performance bonuses.

Gallup’s thresholds for his salary escalator are 70 catches and 1,100 receiving yards. His 2025 base salary escalates by $1.25 million by hitting one of these marks during the 2024 regular season. The increase is $2.5 million if he accomplishes both. The 2026 escalator works the same way based on Gallup’s 2025 performance.

Beckham’s performance bonuses could be tiered where there’s money for different thresholds. For example, there could be levels for 60, 70 and 80 receptions as well as 900, 1,000 and 1,100 receiving yards. Additional money could be earned for being selected to the Pro Bowl Games or earning All-Pro honors. The last time Beckham received such recognition was during the 2016 season.

I suspect teams are going to be reluctant to give Beckham the type of guaranteed money in Gallup’s contract because of his multiple knee injuries and their age difference. The bulk of Gallup’s first two years are essentially fully guaranteed with a portion of the third year becoming secure early in the 2024 league year that March.

A team wouldn’t necessarily need $3,833,333 of 2022 salary cap space to accommodate Beckham on a multi-year contract, although three of the teams reportedly on Beckham’s short list (Chiefs, Cowboys and 49ers) could, according to NFLPA data. It could be done for as little as $1,065,333 of current cap space if he gets the prorated amount of his $1.12 million league minimum base salary, which would be $373,333, and the remaining $3.46 million is a signing bonus. The signing bonus would count $692,000 on the salary cap for 2022 through 2026 with Beckham being under contract for the next four years after this one.

Having 2023 fully guaranteed at signing would surely be a necessity for Beckham to sign anywhere long term. In return, teams would likely want a neutral deal, which is neither front loaded or back loaded, where the cash in each contract years approximates the average yearly salary (i.e. $11.5 million each in 2023, 2024, 2025 and 2026).

Gallup has $1 million of annual per-game active roster bonuses in his contract. The $58,823.53.per game amount is only payable if Gallup is on the 48-man active roster for that particular game. Since Gallup wasn’t active until the fourth game this season because of his knee injury, he lost $176,470.59.

Julio Jones has $1.25 million in per-game roster bonuses ($73,529.42 each game active) in the one year, $6 million contract worth up to $8 million through incentives he received from the Buccaneers after an injury-plagued 2021 season with the Titans. JuJu Smith-Schuster’s one-year prove it deal with the Chiefs includes $1.02 million in per-game roster bonuses ($60,000 for each game active).

Beckham’s $11.5 million of base compensation for 2023 might consist of a fully guaranteed $1.2 million base salary, a $9.45 million third day of the 2023 league year roster bonus (March 17) and $850,000 of per-game roster bonuses ($50,000 each game active). The roster bonus wouldn’t be completely guaranteed at signing. Under NFL Collective Bargaining Agreement rules, only two of the three types of guarantees (skill, injury and salary cap) can exist upon the contract’s execution, so it wouldn’t be prorated like signing bonus. The third guarantee would need to vest several days after signing to avoid proration.

A hesitance by teams to have any guaranteed money in 2024 at signing could be addressed by Beckham’s 2023 performance determining his 2024 security. One idea would be to use the incentives in Jones’ Buccaneers contract for the guarantee vesting marks. Jones has incentives for 50, 60, 70 and 80 catches. He also has incentives for 600, 700, 800 and 900 receiving yards. For each of the eight thresholds reached, 12.5% of Beckham’s 2024 base salary would become fully guaranteed. For example, if Beckham had 62 catches for 775 yards in 2023, $5.325 million or half of Beckham’s $10.65 million 2024 base salary would be fully guaranteed for hitting four of the eight thresholds. The $850,000 in per game roster bonuses for 2024 wouldn’t be impacted by Beckham’s 2023 performance.

Beckham would have $14,483,333 fully guaranteed at signing between his 2022 and 2023 compensation excluding the per-game roster bonus. As much as $25,133,333 could become guaranteed depending on how Beckham performed in 2023. Beckham could get Robinson’s $15.5 million per year and potentially more but would need to consistently display the form he did for the Rams during last season’s playoffs where he caught 21 passes for 288 yards with two touchdowns in four games.

The contract’s structure clearly isn’t what Beckham could have reasonably expected without the second ACL injury. It’s an attempt to balance competing concerns from his perspective and a team’s perspective. Beckham’s best bet to get a somewhat player friendly structure on a multi-year deal this season is for at least two teams to view him as an essential ingredient to a Super Bowl run this season and beyond where he leverages their interest against each other.