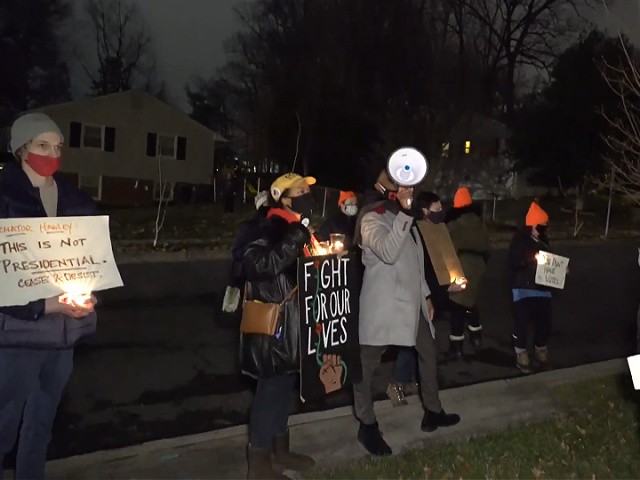 A group of left-wing activists with the organization “ShutDown DC” vandalized and protested outside the home of Sen. Josh Hawley (R-MO), while his wife and newborn child were home alone, to demand he drop his objection to the electoral college vote on January 6.

In a statement on Monday evening, Sen. Hawley said protestors with ShutDown DC arrived at his home in Washington, DC — where his wife and newborn daughter were — and vandalized his property while also threatening his family.

Tonight while I was in Missouri, Antifa scumbags came to our place in DC and threatened my wife and newborn daughter, who can’t travel. They screamed threats, vandalized, and tried to pound open our door. Let me be clear: My family & I will not be intimidated by leftwing violence

Activists with ShutDown DC live-streamed their protest on Hawley’s front lawn via YouTube and touted their efforts on their Twitter page.

“Activists lit candles and delivered a copy of the US Constitution to Hawley’s door,” the group wrote on their website. “The crowd chanted ‘Shame! Shame on Hawley!’ and ‘Protect Democracy from the GOP.’ They also read messages from voters in the states whose election results Hawley and the other Senators are planning to contest, including Missouri and Pennsylvania. Police arrived at around 7:45PM.”

Tonight we dropped in at the home of @HawleyMO to encourage him to end his attack on democracy. Let’s be clear, Hawley and his pals are doing real and serious damage to our democracy. And they’re emboldening thugs like the #ProudBoys https://t.co/W5liUoi77u

Hawley was the first United States senator to announce that he would object to the electoral college vote for the 2020 presidential election, citing widespread reports of voter fraud and election irregularities.

Since his announcement, at least ten other senate Republicans have said they will also object to the electoral college vote, and more than 100 House Republicans are expected to join them.

One Pan Breakfast Bake with Bacon, Hash Browns, and Eggs

Solitaire 3D Is Now Available For Windows 10, Xbox One And Xbox Series X|S

Father Of Alexis Wilson, 19, Says Police In Dolton Have Not Given Him Answers About…

Father Of Alexis Wilson, 19, Says Police In Dolton Have Not…