On Nov 7, 2021
Share
HOUSTON, Texas (KTRK) — Eight people died Friday night and hundreds of others were injured during the opening night of a popular weekend music festival at NRG Park, authorities said.

The worst of the incident began around 9:15 p.m. when the crowd of approximately 50,000 concert-goers began to move toward the front of the stage, according to Houston Fire Chief Samuel Peña.

“The crowd began to compress toward the front of the stage, and people began to panic,” Peña said.

The view from SkyEye overhead Friday night showed the heavy police and fire department activity in the area of the event as organizers ended it early. The organizers, rapper Travis Scott and LiveNation, stopped the show when it was apparent that multiple people were hurt, according to Houston Police Chief Troy Finner.

WATCH: ABC13 extended coverage of the disaster at Astroworld Festival

While the most deadly moments happened after 9:30 p.m., Peña said more than 300 patients total had been treated at a field hospital since the event began, including people who were hurt during the worst moments. While names of the casualties weren’t known, Houston Mayor Sylvester Turner said the victims ages ranged from 14 to 27-years-old.
Authorities were not yet sure of the age of one of the eight victims.

Houston Fire Department and Harris County medics transported 25 people to hospitals, 17 of those patients were taken away during the worst of the ordeal, according to Peña, who also said CPR had to be performed on 11 of the victims. HFD had 55 units in-service for the festival, Peña said.

By Saturday afternoon, 13 were still hospitalized, Turner said. Five of those patients were under 18-years-old.

Festival founder Travis Scott, a rapper and Missouri City native, was joined on stage by Drake in a surprise appearance as the crowd surged.

HPD Executive Assistant Chief Larry Satterwhite was on-duty at the festival along with 367 police officers and 241 security officers. He gave his first-hand account during an early morning press conference.

“Once we started having the mass casualty incident, they were starting CPR on several people, and it happened all at once,” Satterwhite said. “It seemed like it happened over the course of just a few minutes. Suddenly, we had several people down on the ground experiencing some type of cardiac arrest or some type of medical episode.”

Medical transports were already at the park for the multi-day festival, but staff was quickly overwhelmed with injured people, authorities said.

Investigators were dispatched to hospitals Saturday morning in an attempt to identify the victims. The Harris County Medical Examiner’s Office will determine how the eight people died.

The rest of the weekend’s planned performances were canceled, and the area is was cordoned off as a crime scene.

“At some point, the show was stopped when the crowd was surging,” Finner said as he noted the event’s promoters were cooperating with investigators.

It wasn’t yet clear what caused the deaths or injuries. Finner early Saturday shot down any early speculation about the multiple fatalities, an assertion repeated by city and county leaders during a Saturday afternoon briefing.

“There are a lot of rumors on social media,” Turner said. “Let me caution people not to buy into the rumors. Nothing is off the table in terms of persons who were there, people who fainted, people who were transported. As far as a crowd surge, all of those things are being looked at. It’s way too early to draw any conclusions.”

While Finner joined others in cautioning the public from speculation, he did confirm reports that someone may have been injected with a needle during the melee.

“We do have a security guard, according to the medical staff that was out and treated him last night, that he was reaching over to restrain or grab a citizen, and he felt a prick on his neck,” Finner said.

The security guard lost consciousness and was treated with Narcan, a drug used to combat the effects of opioid overdoses, according to Finner, who added that investigators were still trying to locate the security officer involved.

“There were some individuals that were trampled, and we want to be respectful of that,” Finner said. “We just ask that you give us time to do a proper investigation.

Our hearts are with the Astroworld Festival family tonight – especially those we lost and their loved ones. We are focused on supporting local officials however we can. With that in mind the festival will no longer be held on Saturday. As authorities mentioned in their press conference earlier, they are looking into the series of cardiac arrests that took place. If you have any relevant information on this, please reach out to Houston Police. Thank you to our partners at the Houston Police Department, Fire Department, and NRG Park for their response and support. 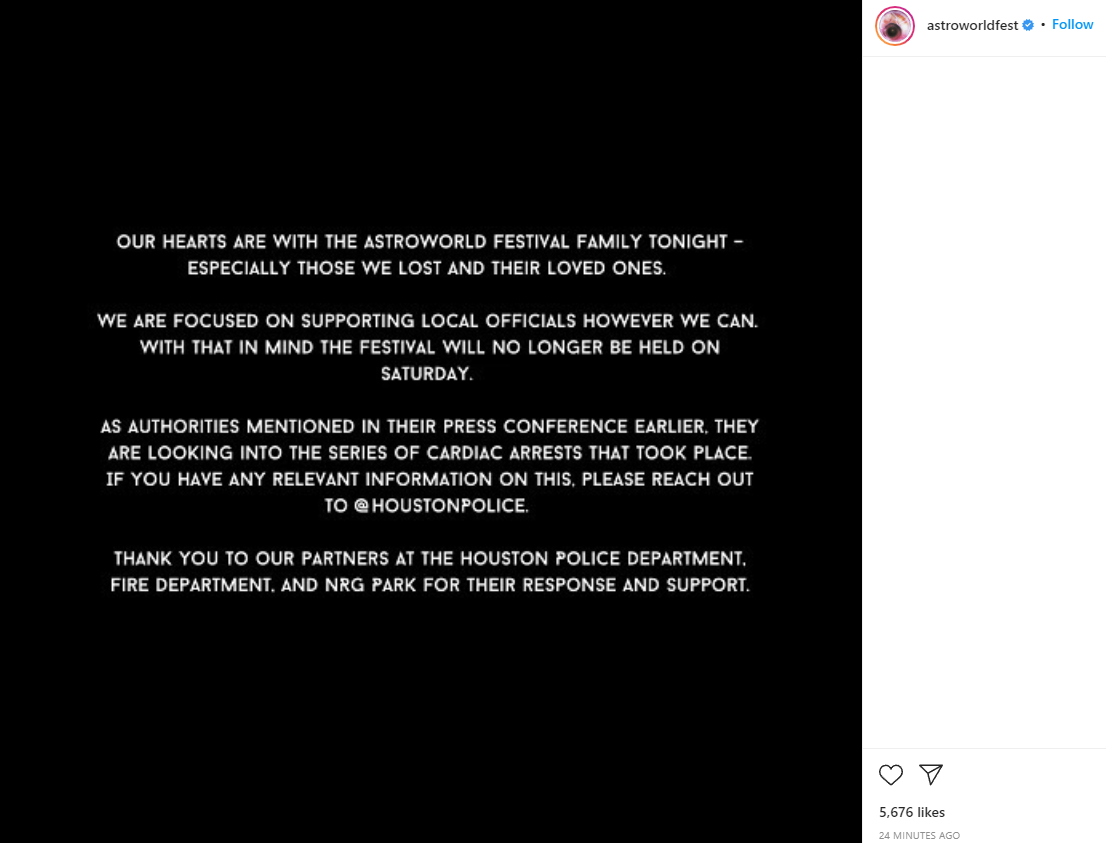 A reunification center was set up at 8686 Kirby Drive near the South Loop at the Wyndham Houston hotel for family members to connect with their loved ones who may have attended the festival. The reunion location, staffed by personnel from Houston Police, the Houston Fire Department and counselors, was established as an information clearinghouse during the hours after the incident.

While it was too early to know if the deaths or injuries were the result of criminal activity, Finner said his department investigating any possibilities.

“Until we determine what happened, what caused the surge, we don’t know,” Finner said. “We will find out. Is there anything criminal? We don’t know.”

The deadly incident came hours after a massive crowd stormed the perimeter of NRG Park, creating a chaotic situation for security personnel and event staff. Finner said the two events were not related.

Multiple fans were trampled Friday afternoon as hundreds rushed the event’s perimeter, knocking down metal detectors and a security screening area. It still wasn’t clear Saturday if anyone suffered major injuries during the earlier incident.

SEE ALSO: Here’s who’ll be at Astroworld Fest this weekend

ABC13 Reporter Mycah Hatfield was near the entrance Friday afternoon as the mob approached, and said security personnel were able to move some people away from the entrance before the crowd overtook the gates.

The event’s 100,000 tickets sold out within an hour of going on sale back in May.

Travis Scott, the popular rapper and organizer, launched the Astroworld Festival in 2018. Like most other large events, it was canceled in 2020 due to the COVID-19 pandemic.

WATCH: Travis Scott and Drake perform during the 2021 Astroworld Festival Friday night where 8 people died and hundreds were injured

ABC13 has reached out to Live Nation Entertainment, the festival’s promoter, and representatives for Travis Scott.

The rapper released the following statement, expressing his heartache over the incident on Saturday morning:

“I’m absolutely devastated by what took place last night. My prayers go out to the families and all those impacted by what happened at Astroworld Festival. Houston PD has my total support as they continue to look into the tragic loss of life. I am committed to working together with the Houston community to heal and support the families in need. Thank you to Houston PD, Fire Department and NRG Park for their immediate response and support. Love you all.”

The Cancer Celebrities – The Atlantic

Nick Cannon mourns loss of his youngest child to a brain…

Woodridge condo residents kicked out of homes after…